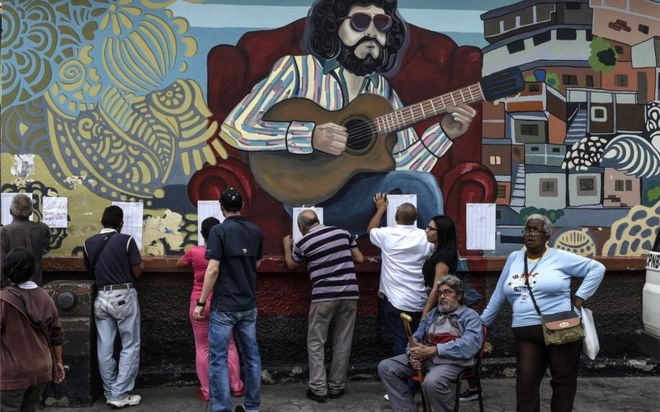 He said only parties which took part in Sunday’s mayoral polls would be able to contest the presidency.

Leaders from the Justice First, Popular Will and Democratic Action parties boycotted the vote and said the electoral system is biased.

In a speech on Sunday, he said the opposition parties had “disappeared from the political map”.

“A party that has not participated today and has called for the boycott of the elections can’t participate anymore”, he said.

In October, the three main opposition parties announced they would be boycotting Sunday’s vote to elect mayors in more than 300 towns and cities.

They said the vote served what they called President Maduro’s dictatorship.

President Maduro’s governing Socialist Party is expected to win the largest number of votes in the mayoral elections, despite a worsening economic crisis characterised by shortages of basic goods and soaring inflation.

Mr Maduro’s pronouncement is designed to provoke the opposition. Especially since he justified the move saying it was a condition set out by the National Constituent Assembly – a body that the opposition refuses to recognise because they say it’s undemocratic.

Mr Maduro has lost popularity because of the worsening economic crisis. In the face of criticism, his strategy has been one of ‘divide and conquer’ – find ways of weakening the opposition to make them less of a threat.

And he’s succeeded – he’s imprisoned some of the most popular opposition leaders like Leopoldo Lopez. He’s prevented others like Henrique Capriles from running for office. And now this threat – banning the most influential parties from taking part in future elections. The opposition is in crisis and Mr Maduro is gloating.

Mr Maduro said he was following the criteria set by the National Constituent Assembly in banning opposition parties from contesting next year’s election.

But the assembly, which came into force in August and has the ability to rewrite the constitution, is dominated by government loyalists. Opposition parties see it as a way for the president to cling to power.

Venezuela, in the north of South America, is home to more than 30 million people. It has some of the world’s largest oil deposits as well as huge quantities of coal and iron ore.

Despite its rich natural resources many Venezuelans live in poverty. This led President Maduro’s predecessor, Hugo Chavez, to style himself as a champion of the poor during his 14 years in office.

Now the country is starkly divided between supporters of President Maduro and those who want an end to the Socialist Party’s 18 years in government.

Supporters of Mr Maduro say his party has lifted many people out of poverty, but critics say it has eroded Venezuela’s democratic institutions and mismanaged its economy.