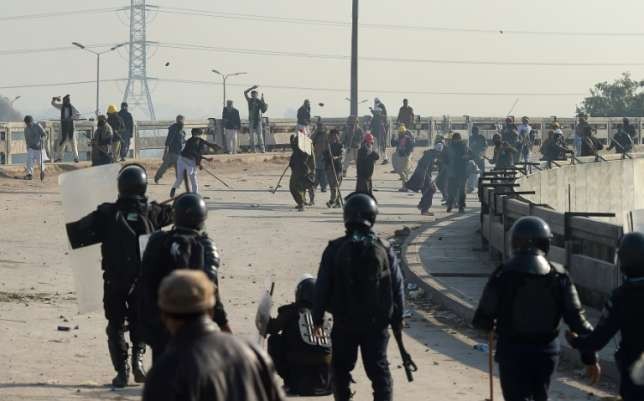 Thousands more protesters massed in Pakistan’s major cities Sunday after attempts to disperse an Islamist rally in Islamabad ended in deadly violence, with the military hesitant to respond to a government appeal for help.

Groups of chanting demonstrators, many armed with sticks, were arriving to occupy roads between Islamabad and neighbouring Rawalpindi, AFP reporters saw.

Thousands more were on the streets than when police and paramilitaries began a bungled operation to clear them one day earlier.

At least 4,750 were in Pakistan’s biggest city Karachi, according to traffic officials, up from roughly 200 the day before. In the cultural capital Lahore an estimated 3,400 were occupying main roads.

Reports said the protests had also spread to other cities and towns across the country.

The numbers are still relatively small by Pakistani standards but have grown swiftly. The situation has become more charged since authorities moved to clear the roughly 2,000 people who have blocked a major highway in Islamabad since November 6, paralysing the capital for weeks.

They were met with stubborn resistance by protesters who torched vehicles and threw stones. At least seven people were killed and around 230 injured before security forces retreated on Saturday.

An interior ministry order said the federal government had authorised the deployment of “sufficient troops” to “control law and order” in the capital until further notice.

But more than 18 hours after the order was released there was no official military response and no sign of armoured vehicles or soldiers on the streets. A military spokesman declined repeated requests for comment.

Civil-military relations have long been fraught in Pakistan, with the military ruling the country for nearly half of its 70-year history.

The little-known Islamist group at the centre of the protests, Tehreek-i-Labaik Ya Rasool Allah Pakistan (TLY), is demanding the resignation of Pakistan’s law minister Zahid Hamid over a hastily-abandoned amendment to the oath which election candidates must swear.

Demonstrators have linked the issue to blasphemy — a highly contentious matter in Muslim Pakistan that has fuelled violence many times before.

“I don’t care if my wife and child go hungry, I don’t care if they die of hunger, for me nothing matters more than the honour of my Prophet,” Riaz Shah, a labourer from Lahore who has been at the sit-in since it began, told AFP.

Showing off broken teeth and a broken finger he said he received in Saturday’s fighting, Shah dismissed fears of military intervention, saying the army “would not come here and dishonour the Prophet”.

He vowed to stay until the protesters’ demands are met.

At a main stage set up at the centre of the sit-in, demonstrators were playing religious songs as more groups arrived. A military helicopter flew briefly overhead but otherwise few members of the security forces were in sight.

Private television broadcasts remained blocked and social media sites were restricted, sparking confusion about the state of protests and how authorities planned to respond to the spiralling situation.

“I don’t have any clue what is happening,” Naeem, a worried resident, told AFP in an Islamabad market.

“Only Allah is running this country,” he added, complaining that the only channel working was Pakistan state TV — and it was airing a children’s programme.

“People’s businesses have been destroyed, people are unable to go on their jobs, to hospitals, they are not sending their children to schools,” said resident Maqbool Ahmed.

“The army should not only contain the situation but disperse them up by beating them with clubs,” he added.

The violence is the latest in a series of blows to the beleaguered Pakistan Muslim League (Nawaz) government as general elections approach in 2018.

In July Nawaz Sharif was ousted as prime minister by the courts over graft allegations, while finance minister Ishaq Dar — also accused of corruption — has taken indefinite medical leave.

play An injured activist is carried away

Analysts said the government had allowed a relatively small protest by an obscure group to grow into a headline-grabbing and potentially dangerous situation.

“This government has dodged many bullets over the last few years, but it certainly faces a particularly daunting test right now,” analyst Michael Kugelman of the Wilson Center in Washington told AFP.

Its ability to survive “depends on the trajectory of the protests,” he said.

Babatunde Fashola ‘We’re re-introducing toll gates across the country,’ Minister says
Everton Club ban fan who attacked Lyon player while holding child Everton on Friday banned a fan who appeared to try and strike a Lyon player while holding a child during their Europa League tie as UEFA opened disciplinary proceedings following the crowd trouble at Goodison Park.
In Kenya Second protester shot dead after fractious vote A second protester was killed in Kenya on Friday as anger raged a day after a divisive election boycotted by the opposition, taking the death toll from two days of protests to eight.
Tizeti partners Facebook to bring Nigerians affordable internet service The Express Wi-fi plans are affordable and range from N50 for 100MB to N2,000 for 10GB.
Here’s the full text of President Buhari’s speech at the APC National Executive Congress today
Goodluck Jonathan I will make sure PDP returns to power in 2019 – GEJ
UK minister Priti Patel resigns over secret Israel trip
‘When I got into the industry and found fame, I became irresponsible’ – Actress, Toyin Abraham
Over 20 whistleblowers paid for money recovered – Minister
In Canada Improved economic outlook cuts budget deficit A surging Canadian economy has reduced the government’s budget deficit this year by billions of dollars, the finance minister said Tuesday.
Donald Trump US president says end of IS caliphate ‘in sight’ after Raqa’s fall US President Donald Trump on Saturday said the end of the Islamic State group’s “caliphate is in sight” following the fall of its former bastion Raqa, and a transition can soon begin to set conditions for lasting peace in Syria.
Jersey Island gives conditions for return of $300m Abacha loot
‘My government will improve aviation infrastructure’ – President Buhari
Dogara Speaker says Legislature, Executive not rivals but partners in progress
Franken ’embarrassed and ashamed’ over groping allegations