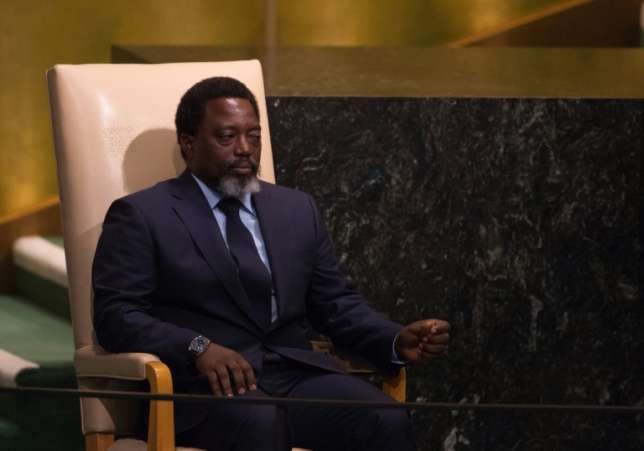 Influential bishops in the Democratic Republic of Congo on Monday urged President Joseph Kabila to pledge he will not seek a third term in office, aiming to ease fears of unrest.

Roman Catholic bishops last year helped broker a deal under which elections for a new president would be held in 2017.

However, the ballot has been delayed, with the country’s electoral commission blaming logistical problems.

Under international pressure, the mineral-rich but chronically poor and politically unstable country has now scheduled the vote for December 23, 2018.

The bishops, after holding an extraordinary meeting on DRC’s crisis, called on Kabila “to reassure public opinion” that he will not be a candidate “to his own succession,” they said in a statement.

Meanwhile, the first round of a review into electoral reform got under way Monday at the National Assembly, stoking tension among lawmakers.

The bill is due to be passed by Friday and written into law no later than December 15, according to the schedule, but members disagree over the details.

Shadari claimed “everybody is against” the threshold, although Henri Mova Sakanyi, secretary general of the People’s Party for Reconstruction and Democracy (PPRD), said it would “allow us to be much more comfortable”.

In power since 2001, Kabila’s prolonged rule has already led to street protests and a bloody crackdown. He was to have stepped down in December after a constitutional maximum of two terms in office.

However, he is allowed to remain in office until a successor is elected, according to a court ruling.

The electoral commission declared that organising a vote in the vast central African country was not possible before March 2019, before the DR Congo’s foreign partners upped the pressure and a timetable was issued.

“It is essential, on the grounds of (demonstrating) sincere political will, to reassure the Congolese people and international partners by providing guarantees that elections will effectively be held,” they warned.

The bishops also called on the government to publish a funding plan for the poll and to ease constraints concerning political prisoners and exiles.

The authorities made arrests ahead of an opposition march on November 15, sparking concern from the United States, Switzerland and Canada about limits on the freedom of expression.

Despite these worries, the government banned rallies due this week in Kinshasa over Kabila’s extended rule. It prompted DR Congo’s former colonial power Belgium to urge a more open dialogue.

“The measures on the demonstrations don’t really do much to ease tensions,” said Belgian Foreign Minister Didier Reynders, in Kinshasa to inaugurate a new Belgian and Dutch embassy.

“We would like to see in the coming months a real opening of the public space and democratic debate.”

Its two wars in the late 1990s and early 2000s dragged in at least six African armies and left more than three million dead. The east of the country remains a battleground for rival ethnic militias.

Kabila took office after his father Laurent-Desire Kabila was assassinated in 2001 at the height of the Second Congo War.

He was confirmed as leader in 2006 during the first free elections since independence, and re-elected for a second term in 2011 in a vote marred by accusations of fraud.

How to lead Nigerians out of poverty, by Tinubu
Photos: Lagos Police Commissioner leads task force to visit Apapa-Kirikiri traffic gridlock
In Pakistan Protests grow as military stays silent
Kalu 10 Million Nigerians will vote for Buhari in 2019, says ex-governor
‘My government will improve aviation infrastructure’ – President Buhari
DR Congo’s Kavumu child rape trial opens
Kenya Country waits for an end to presidential re-run Kenya’s election board is expected Monday to decide whether to reschedule a vote in flashpoint opposition areas or to push ahead with declaring victory for President Uhuru Kenyatta.
DSS, EFCC Clash Sagay asks Magu to report to Buhari
Grace Mugabe The lavish former 1st lady of Zimbabwe who built a palace for herself
Zimbabwe’s Mnangagwa returns to lead nation into ‘new democracy’
President Paul Biya of Cameroon marks 35 years in power
Alex Ekwueme Senate urges FG to immortalise former Vice-President
Here’s the full text of President Buhari’s speech at the APC National Executive Congress today
BBC’s African Player Of The Year Victor Moses, Mane, Salah among nominees
Rex Tillerson US Secretary of State visits Pakistan as US warns over Taliban havens Pakistan has repeatedly denied the charge, insisting it maintains contacts only with the militants as it seeks to bring them to the table for peace talks.
The 5 best/worst Trump Thanksgiving tweets
EU gives country ‘yellow card’ over illegal fishing The European Union said Monday it has given a “yellow card” to Vietnam, warning the Pacific country it could ban seafood exports unless Hanoi did more to tackle illegal fishing.
Atiku All the times ex VP has dumped one political party for another
In India Journalist shot dead in northern India: police A journalist was shot dead by three gunmen in northern India on Saturday, police said, the latest attack on media in one of Asia’s deadliest countries for reporters.