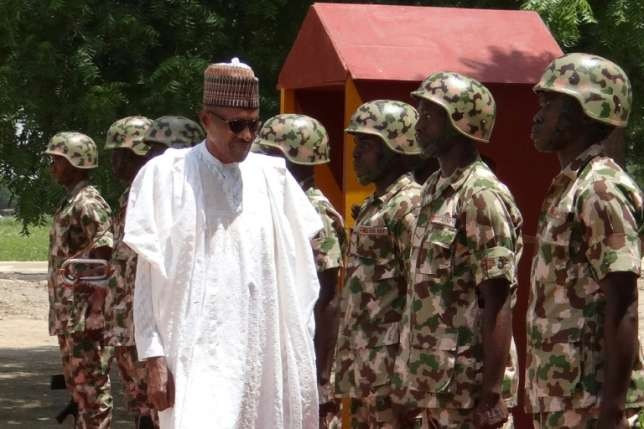 From the lowest local magistrates all the way up to the supreme court in the capital Abuja, the wheels of justice can turn painfully slowly in Nigeria.

Patience is a necessity when cases are frequently adjourned for want of a document, an official, a witness or even a defendant.

The lengthy process — where cases can take years, if not decades, to resolve — often resembles a maddening, judicial Groundhog Day.

But while Nigeria is not alone in having a dysfunctional court system, its ability to cope with a slew of corruption cases is coming under scrutiny as elections approach in 2019.

The Chief Justice of Nigeria, judge Walter Onnoghen, said recently there were 1,124 corruption cases before the courts.

For some that is a sign that President Muhammadu Buhari is following through on his election campaign pledge to get tough on those behind the rampant theft of public funds.

Dozens of high-profile figures, many of them part of the previous administration of Goodluck Jonathan or linked to his People’s Democratic Party, have since been charged and put on trial.

Buhari has called corruption “Nigeria’s number one enemy” and said his government was tackling it “in earnest” by tightening financial procedures and closing loopholes.

But there have so far been more high-profile arrests than convictions — and that could be problematic should Buhari decide to seek re-election, analysts said.

The 74-year-old Buhari recently acknowledged long-standing problems of delays, under-funding and under-staffing in the courts, and the need for institutional reform.

Idayat Hassan, head of the Centre for Democracy and Development in Abuja, said making substantial in-roads into the backlog before 2019 would be a “challenge to the system”.

Some corruption cases date back as far as 2003, when Buhari was making his first — unsuccessful — bid for the presidency.

But during the 2015 election campaign, Buhari and his All Progressives Congress (APC) party promised to overhaul the police and justice system.

But political analyst Chris Ngwodo said: “There’s been a lot of noise and sloganeering… This administration has talked a good game.

“But it hasn’t followed up in taking much action.”

Hassan said some of the EFCC investigations had been exposed as “shoddy”, allowing experienced defence lawyers to seek adjournments to buy time for their wealthy clients.

Clement Nwankwo, executive director at the Policy and Legal Advisory Centre in Abuja, also suggested there had been too much focus on show than substance.

“There’s so much effort to claim credit by arresting people and announcing arrests. There’s no proper investigation,” he said.

The APC’s 2015 election manifesto promised the creation of special courts to hear corruption cases but it has yet to be implemented.

Should Buhari decide to seek a second term, how he and his party position themselves on the fight against corruption will be revealing.

The former army general has had a no-nonsense reputation for probity since he headed a military government in the 1980s.

Matthew Page, a former US State Department official and a specialist on corruption and Nigeria, said the arrests and charges still gave Buhari a political bounce.

He blamed inexperienced or possibly “compromised” judges for slowing down prosecutions.

But with so many people on trial from the previous government and the now main opposition, Buhari and his administration have been accused of a political witch-hunt.

The perception of settling scores has even been enhanced because of Buhari’s delay in taking action against his own political allies accused of corruption.

“In that sense, it will be much more of a struggle to convince people that he’s a uniquely incorruptible president… in 2019,” said Ngwodo.

Nwankwo said the repeated delays and lack of convictions risked eroding the already flimsy trust of Nigerians in their leaders and institutions.

As time passes without a conviction, the more there is a “trail of concern about the process of the arrest and all the parade of suspects”, he added.

“That leads to suspicions that it might just be a political game to hoodwink citizens into believing there’s actually a government effort to tackle corruption,” he added.

Prosecutions need to be seen to be occurring and institutions equipped to do so but currently, the opposite is the case, he added.

Cossy Orjiakor Our Drama Queen is back with more bosom After being away from the public eye for a while now, this actress is finally back with more booby ransom to give away.
Anambra Election PDP candidate, Oseloka Obaze rejects election result
Atiku Ex-VP could ask for Obasanjo’s help for 2019 presidential election
FG protests against burial of 26 Nigerian girls, women Italy
‘No automatic ticket for President Buhari in 2019’ Governor Rochas Okorocha says
Nigeria to Play Argentina November 14, for W/Cup Friendly
Goodluck Jonathan I’m always close to tears when Nigerians say they want me back – ex-President
President Buhari approves the immediate treatment of Alex Ekwueme outside the country
In US Government sternly criticizes Romanian justice plans
Christina Aguilera shares semi-nude throwback photos of herself
EFCC seals $2M mansion of ex pension boss
Zimbabwe politics: Mugabe sacks ‘disloyal’ Mnangagwa
Kenya Country waits for an end to presidential re-run Kenya’s election board is expected Monday to decide whether to reschedule a vote in flashpoint opposition areas or to push ahead with declaring victory for President Uhuru Kenyatta.
‘You should never have to choose between two good things, when both, together, make a perfect combination’ – BankyW shares wise words to the Okoye brothers