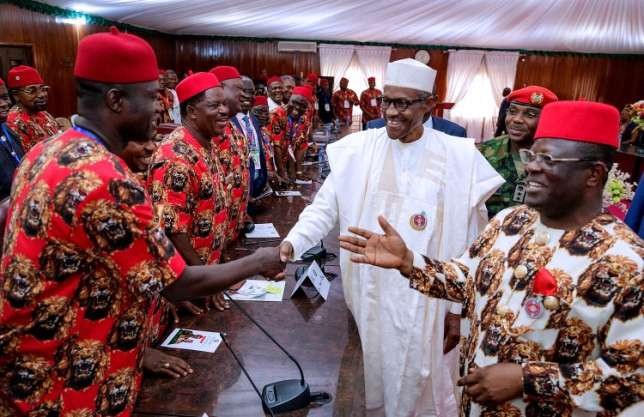 Igbos in Abuja have kick-started campaign for President Buhari’s re-election ahead of 2019.

Nigerians from the eastern part of Nigeria have begun campaign for Muhammadu Buhari’s re-election ahead of the 2019 general elections.

Speaking at the inauguration of the group, of Ndigbo for Buhari 2019, on Sunday, November 26, 2017, an All Progressives Congress (APC) chieftain, Prince Paul Ikonne described the president as a man on a mission to take Nigeria to greater heights.

His words: “As a leader of APC in Abia state and a staunch supporter of President Buhari, I feel compelled to advise Dr Orji Uzor Kalu to desist from acts and utterances capable of discrediting Mr. President and our great party APC.

“The APC is not PPA and as such, the state chairman of APC in Abia State should give Orji Kalu the APC Constitution to read, because I can see he joined APC with PPA constitution in his mind.

“On the 2nd of June 2017, former Governor of Abia State, Orji Uzor Kalu, used his social media account to publish a document titled ‘My Contract with Nigeria.

“The document essentially detailed his manifesto as an aspiring presidential candidate of APC. Some weeks back, the streets of Abuja, Abia, Lagos, Imo and others were defaced with 2019 campaign posters of Orji Uzor Kalu which he confirmed seeing ‘on his way to the airport’ and later disclaimed as the handiwork of his phantom political opponents. But few days ago, he enumerated the benefits and how the posters has made him more popular, saying, ‘by their mischief, PDP was only making me popular and eager to produce an Igbo President’.

“So it is obvious that Kalu, in his usual way and manner, printed and circulated the posters as a way of testing political waters, which is typical of the Kalu that we know. “Most recently, Orji Kalu made utterances bordering on giving an automatic ticket to Gov. Okezie Ikpeazu if he joins the APC. Kalu had said, ‘the ruling party will give an automatic ticket to the currentGovernor of the state, Okezie Ikpeazu if he chooses to defect from the Peoples Democratic Party (PDP).

“For us, this is not only an exhibition of ignorance of party rules, but it is disturbing, distractive and against the party’s Constitution. “We call on well-meaning Abians, the supporters of Mr. President, APC in Abia State and south –east in general to ignore Orji Kalu and his mindset as we continue to support Mr. President for his second term,” Ikonne concluded.