Kalu 10 Million Nigerians will vote for Buhari in 2019, says ex-governor 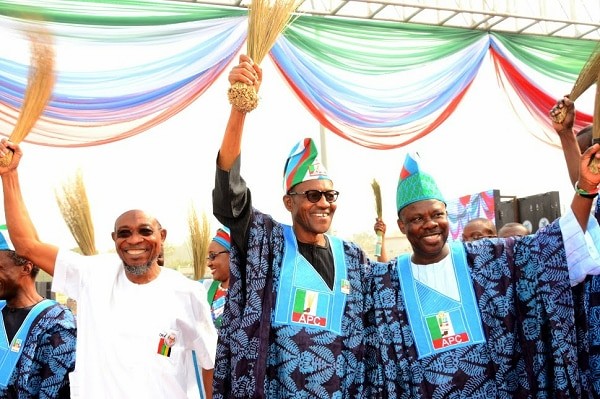 Kalu 10 Million Nigerians will vote for Buhari in 2019, says ex-governor

Kalu disclosed this while speaking on ChannelsTv programme, Sunday Politics on November 26, 2017.

The governor stated that President Buhari would compete for the ticket of the All Progressives Congress (APC) alongside other presidential aspirants.

“All I know is that the APC will have a lot of presidential aspirants in 2019 and President Buhari will be running for re-election,” Kalu announced.

“Buhari has to run. He is the President of Nigeria and he is healthy. What will stop him from running?” the former governor asked Seun Okinbaloye, anchor of the programme.

“Whether he declares or not, that is immaterial. President Buhari will run for re-election,” the ex-governor and businessman categorically stated.

When asked if the President must seek re-election, Kalu said: “It’s not a must but he is going to run. I’m telling you that he will run. Is there any Nigerian President that did not run for second term? President Buhari has to run.

“All I know is that Buhari remains one candidate that has ten million followership. So if you do the election tomorrow, ten million voters will follow him unasked-for. It’s his entitlement to run. But if he is not, there are other candidates in the APC,”  he said.

The former governor noted that the Peoples Democratic Party (PDP) would not return to power except they have a name change.

“There is a difference between government taking ten percent for contracts awarded. In this case, our treasury was looted. People opened our central Bank and massed out the money. So how can they return again?

“There is no international power that can allow that to happen. The international community was very disappointed that was why they insisted that the former government was pushed away. I am speaking on the point of strength,”  he said.

Reacting to the alleged marginalization of Nigerians in the south-east, Kalu maintained that President Buhari has treated the Igbos better that other presidents of the country.

“Buhari did not start this marginalization. It started after the civil war. But, President Buhari has done better for the Igbos than all the past presidents. Buhari is building roads in the south-east like the Enugu-Onitsha expressway.

“I tell my brothers that we do not need ministers but development and infrastructure to increase our development. President Buhari is adequately addressing these issues,” he added.

The former governor also reacted to Atiku Abubakar’s resignation from the APC.

“Political party is just a signboard where politicians put their names on. Both the APC and PDP are the same thing; it’s just change of name. For me, dumping the party means nothing. Atiku is still a Nigerian and should enjoy all the rights entitled to him.”