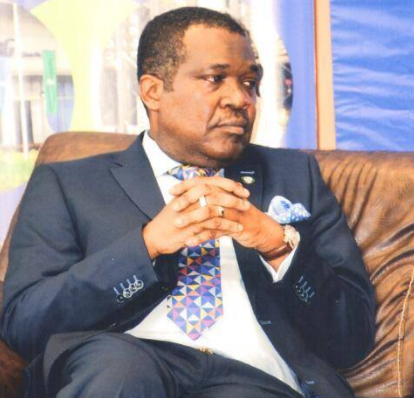 Otunba Bimbo Ashiru, the Commissioner for Commerce and industry in Ogun state has resigned.

Ashiru was appointed as Commissioner by Governor Amosun in 2011. He was one of the longest commissioners in Ogun State government cabinet.

According to reports, Ashiru was adopted as the consensus governorship candidate of Ijebu and Remo ahead of the 2019 general elections.

Ashiru was picked at an Ijebu Ode meeting, to fly the flag of the party in 2019 by the Ijebu/Remo Governorship Agenda Elders Forum to battle for the party’s ticket with other aspirants from other zones at the primary.

Buhari visit to Southeat
Mother sells daughter for N280,000 to pay debt
‘No automatic ticket for President Buhari in 2019’ Governor Rochas Okorocha says
Monkeypox Virus now in 11 states The ministry of health’s spokesman, Mrs Boade Akinola made this known in a statement issued on Friday in Abuja.
5 kid-robbers arrested by OPC members while burgling shop A gang of kid-robbers who invaded a shop late in the night in Ogun State were saved from lynching by men of the OPC after they were caught.
Self Defence ‘I killed my uncle when he tried to rape me’ – Murder suspect The police in Enugu State have arrested a young girl who killed her uncle when he attempted to rape her in his house.
Delta state confirms 1 case of Monkeypox
Punk group attack ‘police state’ on Trump anniversary
Nine dead, many injured in accidents
Primary school pupils protest sack of 21,780 teachers in kaduna
Photos from President Buhari’s dinner with the leadership of National Assembly at the State House
Antonio Guterres Trump says UN boss doing ‘very very spectacular job’ US President Donald Trump jettisoned his past criticism of the United Nations Friday, as he lavished praise on the organization’s Secretary General.
Why I withdrew Governor Obiano’s security personnel – Police IG Speaks.
Nigerians on twitter slam Okorocha for unveiling statue of Liberian President, Ellen J. Sirleaf in Imo State today
Goodluck Jonathan Ex-President says Buhari’s government is full of lies Goodluck Jonathan says the Buhari government thrives on lies and propaganda.
‘Goodluck Jonathan’s administration won gold medal in corruption’ Bola Tinubu
Wike, Amaechi’s convoy clash in Port Harcourt [See pictures]
Photos: Vice President Yemi Osinbajo attends wedding of the DSS official attached to him
Hundreds block Guatemala roads to demand president step down Hundreds of protesters blocked roads in Guatemala on Tuesday to demand that President Jimmy Morales step down because of accusations of corruption stemming from his 2015 election campaign.