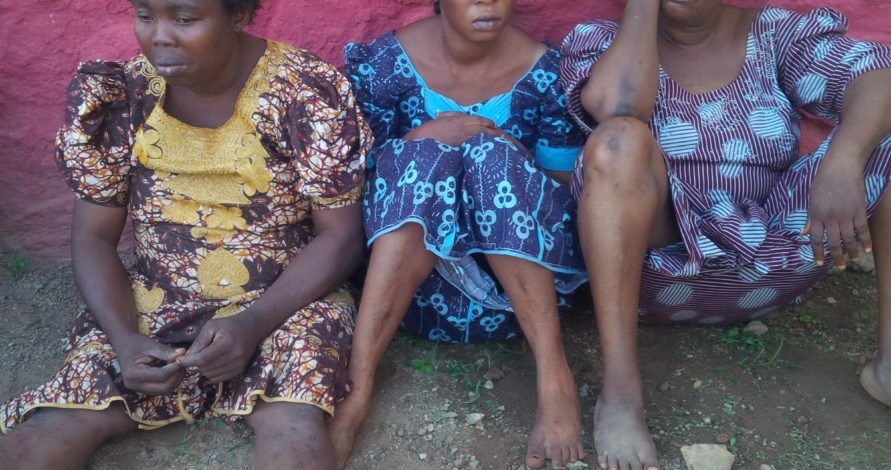 Tearful Olubunmi Funke, a single mother, on Tuesday disclosed that she sold her three years old daughter to one Abibat Oyesanya, a member of child trafficking ring to enable her offset a crippling debt burden.

Funke who said she even took to prostitution to raise money to pay the debt when her husband sent her away from matrimonial home, added the syndicate who allegedly specialized in child stealing and kidnapping in South West, bought the little girl off her for N280,000.

She made the disclosure to reporters at Eleweran, the Ogun State Police Command Headquarters where she was paraded along with two other women, Abibat Oyesanya Morenike Shittu in connection with trading in children.

“I gave out my three year old daughter to Abibat Oyesanya who is into local adoption business. But she promised me that I would be allowed to visit my daughter once in three month.

“I am a prostitute. I engaged in prostitution after my first husband sent me packing. So, I decided to give out my daughter to woman who gave me N280, 000. I used the money to offset my debt.

“The woman also requested for more children based on more demands for those adopting children. That is why I kidnapped the baby girl in Bodija, Ojurin, Ibadan, and brought it to the woman.”

The Commissioner of Police, Ahmed Iliyasu, said the Police in the state were committed to flushing out criminals, adding that the suspects were arrested as part of “ember month mop-up operations of the Command.”

Ahmed also paraded  a self-styled prophet, Darasimi Rotimi and his accomplice, Ibikunle Sunday who allegedly killed one Sara Olowokere and harvested  her body parts for rituals.

The Commissioner said Darasimi and Ibikunle killed Olowokere in Sango area of the state and “dissected her body, remove the head, wrist, heart, breast and the private part.”

According to him, the suspects buried the  remains of the victim  at Alafia street off Alagbola area of Ijoko –  Ota.

Although, Ibikunle, a 40-year old Okada Rider, admitted to  killing the victim but the self-acclaimed Prophet Darasimi from Cherubim and Sheraphin, Ijoko, denied his involvement in the act.

“I don’t know anything about the incidence. I am ready to die,” Darasimi said.

However, the accomplice said: “I hit a plank on her head. When she died we now shared her parts. I took her head.  Ogo-eri and Darasimi took other parts of the body away. They said the parts are essential ingredients for ritual.

“No mind him. He is just lying. If you commit an offence and confess, God will definitely forgive you. I regret my action. I hope the government will temper justice with mercy.”