Nine dead, many injured in accidents 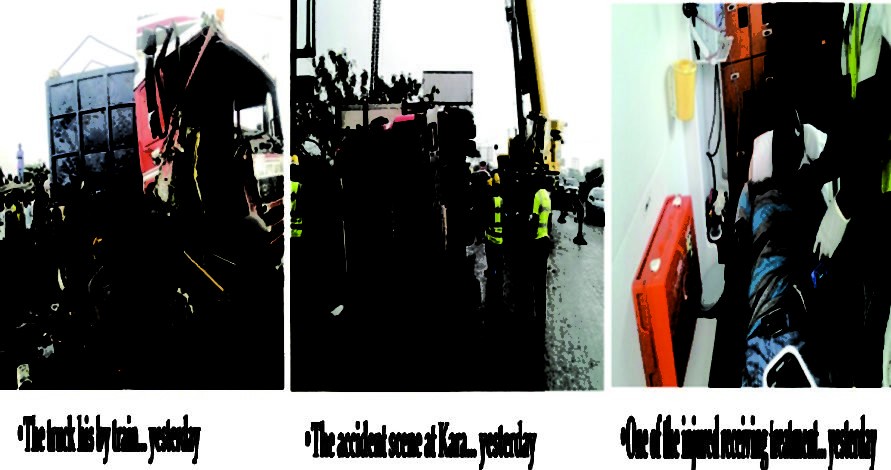 Nine persons were confirmed dead yesterday and many others injured in rail and road crashes.

Four hangers-on were crushed when a train hit a truck at Abbatoir in Agege.

The accident at Kara that occurred around 7am caused  a traffic gridlock for several hours.

The Nation gathered that a vehicle lost control and crashed into another; others smashed into one another in quick succession.

In the Agege accident, it was gathered that the train hit a truck marked MYM63XA, which attempted to make a turn on the rail track.

The four men who died were said to be hanging on the train. They fell during the collision. Those who sustained injuries were treated by the Lagos State Ambulance Service (LASAMBUS).

The Nigerian Railway Corporation (NRC’s) Lagos District Manager, Mr Jerry Ochei, said the trailer was hit by the train while reversing, killing and injuring  passengers that were hanging on the train.

“Police assisted in evacuating the injured and the dead. The train did not derail. It continue and arrived its destination at Iddo safe,” he said.

Tiamiyu urged motorists to adhere to road safety rules, noting that people who hang on moving trains/vehicles should desist to avoid reoccurrence.

Man commits suicide in Delta after girlfriend dumped him
Morning Teaser ‘My best friend’s wife is carrying my baby’ Nnamdi is in a very serious dilemma after he got his best friend’s wife pregnant and as the baby is due, he does not know if he should confess what he did.
At least 650 people die in daily road accidents across Africa – United Nations
Delta state confirms 1 case of Monkeypox
Photos: Vice President Yemi Osinbajo attends wedding of the DSS official attached to him
Wike, Amaechi’s convoy clash in Port Harcourt [See pictures]
‘No automatic ticket for President Buhari in 2019’ Governor Rochas Okorocha says
Kidnap suspect’s Evans family makes appearance at Aso Rock meeting
Mad Love Bayelsa police arrest man for butchering his wife A 24-year-old man has been arrested by the police in Bayelsa State for butchering his wife to death on suspicion of cheating.
Jay Som -The Bus Song (@jaysomband)
Primary school pupils protest sack of 21,780 teachers in kaduna
Photo of actresses Funke Akindele-Bello and Lolo at a party in Lagos today
5 kid-robbers arrested by OPC members while burgling shop A gang of kid-robbers who invaded a shop late in the night in Ogun State were saved from lynching by men of the OPC after they were caught.
Punk group attack ‘police state’ on Trump anniversary
Self Defence ‘I killed my uncle when he tried to rape me’ – Murder suspect The police in Enugu State have arrested a young girl who killed her uncle when he attempted to rape her in his house.
Why I withdrew Governor Obiano’s security personnel – Police IG Speaks.
Pinki Debbie seeks world record for dance
Monkeypox Virus now in 11 states The ministry of health’s spokesman, Mrs Boade Akinola made this known in a statement issued on Friday in Abuja.
Trump reportedly wants the State Department to release any Hillary Clinton emails it has left
Police confirms identity of the man who sadly committed suicide at the Lekki-Ikoyi bridge yesterday
Share
Facebook
Twitter
WhatsApp
Pinterest
Linkedin
ReddIt
Email
Print
Tumblr
Telegram
Mix
VK
Digg
LINE
Viber
Naver
Previous article2018 budget: Govt votes N1b for State House Clinic
Next articleDJ Maphorisa & DJ Shimza – Makhe ft. MoonChild.