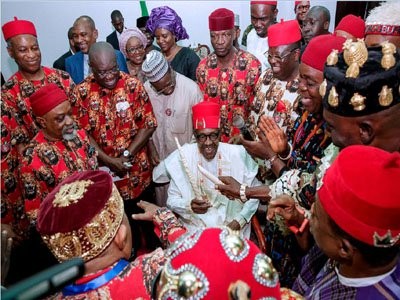 President Muhammadu Buhari got a rousing reception yesterday on his first visit to the Southeast since he came into office in 2015.

He got traditional titles and gift items – 2,000 tubers of yam and 2,000 bags of rice. Ebonyi State is a leading producer of  the two food items.

He promised to urgently address the infrastructural challenges confronting the Southeast.

Buhari’s plane landed at the Akanu Ibiam Airport in Enugu where he was received by governors, ministers and leaders of the region.

He travelled to Abakaliki, the Ebonyi State capital, to inaugurate some projects. He was hosted to a reception by leaders and traditional rulers.

During a reception held in his honour at the Government House, Buhari noted that the Igbo remained an integral part of the country.

The President recalled that he pledged to fulfill all campaign promises to the zone when the leaders visited him last month.

“The leaders raised several concerns on the condition of roads and other infrastructure in the region and I want to assure you that we will deliver on all our promises.

“The 2018 budget captures several strategic projects in the region, which include roads, power, agriculture, social services, among other,” he said.

Buhari noted that his visit was an affirmation of his administration’s commitment to achieving a united Nigeria for the benefit of all citizens.

“We are the most populous country in Africa with over 300 ethnic groups as our diversity is unique among nations of the world.

“I thank the citizens of Ebonyi for their warm reception and hospitality since my arrival which has made me happy to be in the state.

“I also commend the governor for his numerous infrastructural strides some of which I have commissioned,” he said.

He also paid tribute to former Governor of Eastern Region Dr Akanu Ibiam while unveiling the statue the State Government erected in his honour.

“Ibiam was a great Nigerian whose contributions and notable record in humanitarian work -free primary education advocacy and rural development – have been inspirational to all,” he said.

Ebonyi State Governor Dave Umahi thanked the President for the visit, noting that it confounded those who doubted its possibility.

“We want to thank you for your assistance in the areas of agriculture, harnessing of mineral resources and other areas of the state’s development plan.

“You have assisted us in becoming a force to be reckoned with in agriculture, especially in rice production.

“We assure you we will redouble our efforts to meet the rice needs of the country,” Umahi told the President.

Senator Sam Egwu (PDP-Ebonyi North), a former governor of the state on behalf of the stakeholders, thanked God for restoring the President’s health and granting him the strength to work.

Egwu urged the president to ensure that state’s College of Education in Ikwo was converted to a federal institution.

He also urged the Federal Government to solve the lingering boundary disputes between Ebonyi and its neighbouring states, such as Cross River and Benue.

The President inaugurated two multi-billion naira flyovers on the African trans-Saharan highway which passes through Abakaliki to Cross River and Cameroon.

The President inaugurated the 14.5km Abakiliki-Afikpo Federal road constructed by the Ebonyi Government.

He also inaugurated the 700-metre dual flyover over the Trans-Sahara route, running from Enugu to Cameroon, and the Sen. Offia Nwali flyover, all in the state capital.

President Buhari also performed the foundation-stone laying ceremonies of Ebonyi City Mall, another flyover and a road tunnel named after him.

He unveiled the statue of the late Sir Akanu Ibiam.

He also laid the foundation of the ultramodern shopping mall to be constructed by the state government.

The state government also offered the President 2, 000 bags of rice, 2, 000 tubers of yam and a white horse in appreciation of his visit.

At another event with traditional rulers, led by Eze Eberechi Dick, the President was conferred with the chieftaincy title of Ochioha Ndigbo (Leader of Igbo people).

We’ll facilitate Joshua’s visit to Nigeria – Ogun govt
‘No automatic ticket for President Buhari in 2019’ Governor Rochas Okorocha says
US President stepped up praise for Xi ahead of China visit
US President to decide on North Korea terror list after Asia trip
Photos: Vice President Yemi Osinbajo attends wedding of the DSS official attached to him
Punk group attack ‘police state’ on Trump anniversary
Nigerians on twitter slam Okorocha for unveiling statue of Liberian President, Ellen J. Sirleaf in Imo State today
Photos: Nigerian Man Drinks Mud Water In Fulfillment Of Promise He Made, Should President Buhari Return From London
Why I withdrew Governor Obiano’s security personnel – Police IG Speaks.
President Paul Biya of Cameroon marks 35 years in power
Photos from President Buhari’s dinner with the leadership of National Assembly at the State House
Monkeypox Virus now in 11 states The ministry of health’s spokesman, Mrs Boade Akinola made this known in a statement issued on Friday in Abuja.
Delta state confirms 1 case of Monkeypox
US president jumps over China’s ‘Great Firewall’ with first tweet
‘My mother encouraged to travel to Abidjan for prostitution
Cristiano Ronaldo Real Madrid player meets Governor Wike Ronaldo and Ramos praised Wike for his commitment to the development of football in Nigeria.
5 kid-robbers arrested by OPC members while burgling shop A gang of kid-robbers who invaded a shop late in the night in Ogun State were saved from lynching by men of the OPC after they were caught.
Donald Trump arrives in S Korea with focus on Pyongyang
Ritual Murder Headless body of young girl found inside suitcase in Edo [Graphic Photos] The headless body of a young lady has been discovered stuffed inside a suitcase and dumped by the roadside in Edo State.
Share
Facebook
Twitter
WhatsApp
Pinterest
Linkedin
ReddIt
Email
Print
Tumblr
Telegram
Mix
VK
Digg
LINE
Viber
Naver
Previous articleWhy I withdrew Governor Obiano’s security personnel – Police IG Speaks.
Next articleKidnap suspect’s Evans family makes appearance at Aso Rock meeting