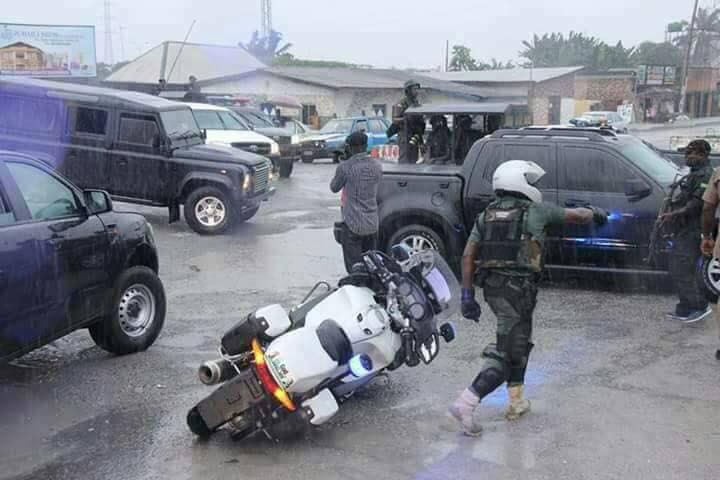 Report from Rivers State says a major disaster was averted when Amaechi and Wike met at a cross road in Nwanja area of Elekahia road, Port Harcourt.

It is unclear who ran into the other, but dissenting reports from both groups say there was a scuffle but none of the gladiators, Wike and Amaechi were hurt.

A statement from Government House Port Harcourt, signed by Governor Wike’s Special Assistant on Electronic Media, Simeon Nwakaudu accused the Military Personnel and officials of the Special Anti Robbery Squad attached to the Minister of trying to assassinate the Governor.

Nwakaudu alleged that the Governor’s outrider was knocked down by Amaechi’s convoy, while while other members of the Governor’s convoy were molested.

According to the statement, “Rivers State Governor, Nyesom Ezenwo Wike on Saturday escaped assassination as Special Anti-robbery Squad Operatives and soldiers of the Nigerian Army in the motorcade of the Minister of Transportation, Rotimi Chibuike Amaechi attacked his convoy.

“The governor who was on project inspection was attacked at Nwanja Junction on Trans-Amadi Road.

“The SARs Personnel and Soldiers in the Minister’s convoy hit down the Governor’s Escort Rider and attacked the policemen in the pilot car.

“Also part of the attack, was the Commander of Rivers SARS, Mr Akin Fakorede who received the Minister of Transportation at the Port Harcourt International Airport and accompanied on his trip.

“After the attack, the Rivers State Governor continued with his inspection of Projects.”

Meanwhile, a pro-APC group in Rivers state, the ikwerre Youth movement International also said it was condemning, “Gov Nyesom wike’s assault on the convoy of the Minister of transportation Chibuike Rotimi Amaechi.”

In a statement issued by the IYM President General Azubuike Nwanjoku, member representing Ikwerre in the state House of Assembly signed by the National publicity secretary, Dike Bekwele, the group claimed that, “it was unfortunate that the action of the Governor is suicidal and detrimental to the all ready charged environment witnessing and not insecurity in resent times.

“It was disappointing that the governor would direct attack on a security operatives on the convoy of the Minister.”

In the meantime, when contacted Police Public Relations Officer in Rivers state, Nnamdi Omoni told DAILY POST that leaders of the Peoples Democratic Party and All Progressives Congress in the state are at the State CID “to offer statements on what really transpired”.

Buhari visit to Southeat
Jersey Island gives conditions for return of $300m Abacha loot
Ritual Murder Headless body of young girl found inside suitcase in Edo [Graphic Photos] The headless body of a young lady has been discovered stuffed inside a suitcase and dumped by the roadside in Edo State.
Self Defence ‘I killed my uncle when he tried to rape me’ – Murder suspect The police in Enugu State have arrested a young girl who killed her uncle when he attempted to rape her in his house.
Mad Love Bayelsa police arrest man for butchering his wife A 24-year-old man has been arrested by the police in Bayelsa State for butchering his wife to death on suspicion of cheating.
‘My mother encouraged to travel to Abidjan for prostitution
‘No automatic ticket for President Buhari in 2019’ Governor Rochas Okorocha says
Trump reportedly wants the State Department to release any Hillary Clinton emails it has left
Federal Government to raise N311b from assets sale
Cristiano Ronaldo Real Madrid player meets Governor Wike Ronaldo and Ramos praised Wike for his commitment to the development of football in Nigeria.
Goodluck Jonathan Ex-President says Buhari’s government is full of lies Goodluck Jonathan says the Buhari government thrives on lies and propaganda.
Delta state confirms 1 case of Monkeypox
Why I withdrew Governor Obiano’s security personnel – Police IG Speaks.
Nigerians on twitter slam Okorocha for unveiling statue of Liberian President, Ellen J. Sirleaf in Imo State today
In Greece Authorities arrest suspect over letter bomb attacks Greek police said they arrested a suspect Saturday over a series of letter bomb attacks targeting the country’s creditors, one of which injured former prime minister Lucas Papademos earlier this year.
5 kid-robbers arrested by OPC members while burgling shop A gang of kid-robbers who invaded a shop late in the night in Ogun State were saved from lynching by men of the OPC after they were caught.
Sean Dampte – Nana (@SeanDampte)
Rex Tillerson US Secretary of State visits Pakistan as US warns over Taliban havens Pakistan has repeatedly denied the charge, insisting it maintains contacts only with the militants as it seeks to bring them to the table for peace talks.
UK minister Priti Patel resigns over secret Israel trip
Photos: Vice President Yemi Osinbajo attends wedding of the DSS official attached to him
Share
Facebook
Twitter
WhatsApp
Pinterest
Linkedin
ReddIt
Email
Print
Tumblr
Telegram
Mix
VK
Digg
LINE
Viber
Naver
Previous articleNigeria Police reject ranking as world’s worst
Next articleBianca is Responsible for My Father’s Death – Emeka Ojukwu Jnr Speaks Out in Explosive Interview