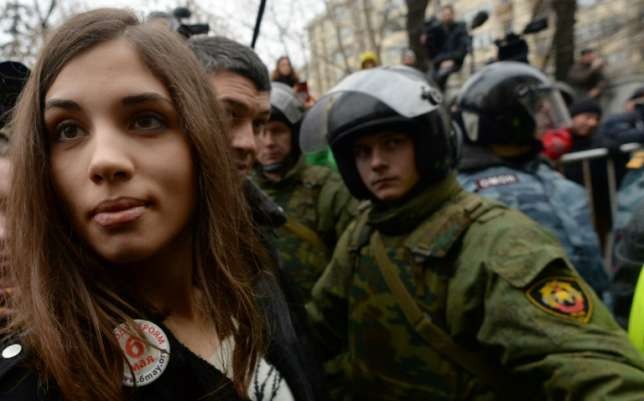 The punk group, whose key members served prison time in Russia, on Wednesday released “Police State” to mark one year since Trump’s upset victory in the US presidential election.

A ballerina gracefully dances in the midst of the destruction and the officer rams the baton onto a woman who turns out to be Pussy Riot’s Nadezhda Tolokonnikova, singing, “Everybody is doing the same thing / And it makes me happy.”

The video is available at https://youtu.be/oaZl12Z5P7g.

The United States may not literally be an authoritarian state, but Tolokonnikova said she believed Trump was following the playbook of Putin, for whom the US president has controversially expressed admiration.

“Trump’s attitude to media, when he’s saying they’re spreading fake information and they shouldn’t be allowed to do it — for me it was a really bad sign because that was Putin’s thought process when he came to power,” she told AFP at a New York cafe.

“This is something from a different realm — prosecuting your political opponents — that I’ve seen in my country as well.”

Tolokonnikova and bandmate Maria Alyokhina were imprisoned for nearly two years on a conviction of hooliganism after performing a “punk prayer” against Putin in 2012 in a cathedral near the Kremlin.

Explaining the video’s imagery, Tolokonnikova said she was fascinated by the open minds of children and their willingness to look at the planet’s long-term future.

“Our job is to remain kids and ask strong, uncomfortable questions all our lives,” she said.

Tolokonnikova said she was heartened by the number of teenagers who turned out in recent protests in Russia against Putin.

“They have grown up knowing only him as the president,” she said. “They see him as a tsar and they don’t like it, because they don’t want to go back 100 years ago to tsarist Russia.”

“Police State” is Pussy Riot’s first music since October 2016 when the act released “Make America Great Again,” a twist on Trump’s campaign slogan that imagined a dystopian future for women if the real estate mogul won.

“Police State” marks a comparatively abstract approach for Pussy Riot and a deeper turn into electronic music, with the song driven by an ominous synthesized bass.

Tolokonnikova wrote the song with Ricky Reed, the US producer who has worked with pop stars Meghan Trainor, Kesha and Twenty One Pilots.

Tolokonnikova, who hopes to release a full Pussy Riot album next year, also announced her career’s first pre-scheduled concerts starting Thursday in Berlin, with shows next month in Los Angeles and Houston.

She has worked as well on an immersive theater project, in which the audience will live out Pussy Riot’s prison experience. The piece opens on November 14 at London’s Saatchi Gallery.

5 kid-robbers arrested by OPC members while burgling shop A gang of kid-robbers who invaded a shop late in the night in Ogun State were saved from lynching by men of the OPC after they were caught.