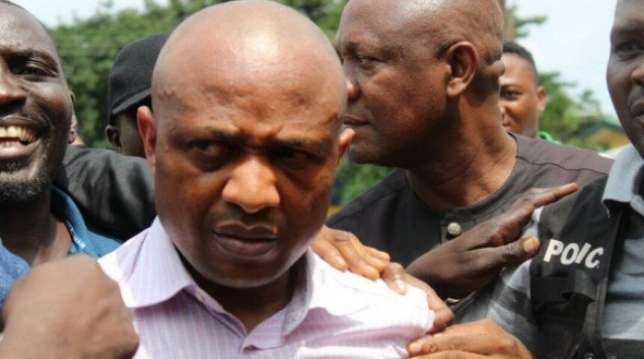 in what is an interesting turn of events, the wife and children of notorious billionaire kidnapper, Chukwudumeme Onwuamadike, popularly known as Evans, made an unlikely appearance at a summit in Aso Rock.

During the Federal Executive Council Retreat On Education at the Old Banquet Hall at the State House, the infamous picture of the kidnap suspect’s wife and children crying was used to demonstrate the education sector’s cry for help.

In what is most likely an unfortunate error in judgement, the infamous picture was displayed alongside the words “President Muhammadu Buhari. Please. Wipe away our tears. Education.”

The infamous photograph was used in a presentation in Aso Rock

The photograph had appeared on the internet in July when the family of the kidnap suspect were appealing to Nigerians to forgive his crimes in what was a media circus.

Evans was arrested by a combined team of the Intelligence Response Team (IRT) and the Anti-Kidnap Unit of the Lagos State Police Command at one of his Magodo Phase II GRA, Lagos, home on June 10, 2017.

His arrest was followed by revelations of how he successfully carried out kidnappings and made millions of dollars from his victims, eluding the police during his decade-long reign of terror.

He’s already pleaded ‘not guilty’ to two-count charges of conspiracy and kidnapping before Justice Hakeem Oshodi of the Ikeja division of Lagos High Court.

Evans arrives at the Lagos State High Court in Igbosere on October 27, 2017

Evans is also facing separate charges that include conspiracy, kidnap and murder before the Igbosere division of the Lagos High Court.

The charges relate to the alleged kidnap and murder of Sylvanius Ahanonu Hafiia, and the conspiracy and attempted kidnap of the chairman of The Young Shall Grow Motors, Vincent Obianodo.

While speaking at the summit on Monday, President Buhari called for a change to the rot in the education system that’s responsible for an estimated 13.2 million children currently out of school.

He lamented that the education sector has been harmed by years of abuses, mindless impunity and corruption, and charged the summit to sharpen strategies for addressing the challenges of basic and secondary education.

He said the country cannot afford to be trailing the rest of the world in education and must employ crucial measures to raise the standard.

He reaffirmed his administration’s commitment to confronting and tackling the challenges in the education sector as it would also help to secure and stabilise the country.

‘When I got into the industry and found fame, I became irresponsible’ – Actress, Toyin Abraham
Punk group attack ‘police state’ on Trump anniversary
Nigerian student jailed for raping 12-yr-old girl in the UK Another Nigerian student in a UK university has been sentenced to five years in prison for raping a 12-year-old girl he met on the Internet.
Ritual Murder Headless body of young girl found inside suitcase in Edo [Graphic Photos] The headless body of a young lady has been discovered stuffed inside a suitcase and dumped by the roadside in Edo State.
Morning Teaser ‘My best friend’s wife is carrying my baby’ Nnamdi is in a very serious dilemma after he got his best friend’s wife pregnant and as the baby is due, he does not know if he should confess what he did.
Mother sells daughter for N280,000 to pay debt
President bans fresh recruitment into MDAs in 2018
‘No automatic ticket for President Buhari in 2019’ Governor Rochas Okorocha says
Tizeti partners Facebook to bring Nigerians affordable internet service The Express Wi-fi plans are affordable and range from N50 for 100MB to N2,000 for 10GB.
#Budget2018: ‘Nigerians will be better, happier in 2018’
Davido Singer’s daughters celebrate their 1st Halloween (pictures)
Nigerians on twitter slam Okorocha for unveiling statue of Liberian President, Ellen J. Sirleaf in Imo State today
Amosun, Dalung, Mohammed to cheer Joshua fight
Delta state confirms 1 case of Monkeypox
Primary school pupils protest sack of 21,780 teachers in kaduna
‘My mother encouraged to travel to Abidjan for prostitution
Tiwa Savage switches up her look by rocking a platinum blonde hairstyle for AFRIMA 2017 (photos)
US President to decide on North Korea terror list after Asia trip
2 men arrested for murder of 26 Nigerian girls, women killed in In Italy sea
Why I withdrew Governor Obiano’s security personnel – Police IG Speaks.
Share
Facebook
Twitter
WhatsApp
Pinterest
Linkedin
ReddIt
Email
Print
Tumblr
Telegram
Mix
VK
Digg
LINE
Viber
Naver
Previous articleBuhari visit to Southeat
Next articleMaina ran bank account through sms, email, EFCC tells court