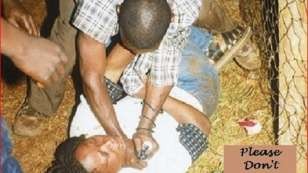 A 24-year-old man, Vincent Edwin, has been arrested by the Bayelsa State Police Command for hacking his 21-year-old wife, Joy, to death following a suspicion of infidelity.

Vanguard reports that Edwin had trailed his wife to the river where she had gone fishing with a neighbour and used a machete to hack her to death before fleeing the scene only to be arrested later.

It was gathered that the incident occurred on Sunday, November 5, 2017, at Boro Camp, Kaiama, in the Kolokuma/Opukuma Local Government Area of the state.

The deceased was said to have gone fishing with her neighbour, Juliet Philip, when Edwin trailed her to the river and attacked her with the machete, killing her instantly before escaping the scene.

“On November 5, 2017, at about 8.30 pm, one Edwin Vincent, a native of Uwheru, in the Ughelli North LGA, Delta State but residing at Boro Camp, Kaima, in Bayelsa State, attacked and killed his wife,  Joy, 21 years old.”

Butswat further said that after the suspect was arrested, he confessed to the crime, adding that investigation was ongoing to ascertain the real motive behind the murder.