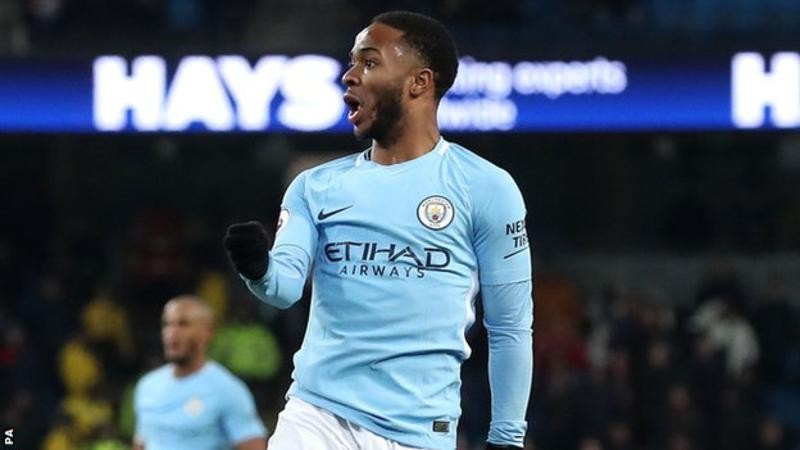 Sterling’s 13th goal of the season gave City a club-record 12th successive Premier League victory which restores their eight-point lead at the top of the table.

Sterling had scored decisive late goals in City’s previous two wins, over Feyenoord and Huddersfield, but his third strike of the week was his most dramatic of the lot, and sparked wild celebrations from City boss Pep Guardiola and his bench.

“Raheem is a match-winner, it was a fantastic goal, I am so happy for him,” Guardiola said.

“As I have said many times, he is making steps. Before he was a little bit more shy and he did not believe, but now he can do that.

“I think his team-mates give him the confidence and say ‘we trust in you’ but then you have to have the personality to do what he did in the last minute.”

The referee Paul Tierney spoke to Guardiola to calm him down before play restarted and the City boss admitted he lost control of his emotions.

“I apologised, I could not control it,” he added. “I was so happy like all the fans and all the players. I wanted to run behind ‘Ras’, but I am not fast enough. We are so happy.”

Among the City players and staff who tried to catch Sterling as he ran the length of the pitch to celebrate his goal was Benjamin Mendy, who is sidelined until spring with a anterior cruciate ligament injury.

“Mendy is crazy,” Guardiola said with a smile. “He has a six-month injury, and he is running. Disaster!”

City had taken the lead at the start of the second half when Saints defender Virgil van Dijk got the final touch on Kevin de Bruyne’s free-kick.

But it appeared Saints got their reward for a determined display when Oriol Romeu swept home Sofiane Boufal’s pull-back with 15 minutes remaining.

Sterling, who is enjoying the most prolific season of his career, had other ideas.

He had already seen a goal disallowed for a foul on Saints keeper Fraser Forster moments earlier, but was not to be denied – cutting in from the left, exchanging passes with De Bruyne and bending the ball past Fraser Forster.

Guardiola’s side had already made the most successful start in Premier League history, with 37 points from their first 13 games.

This win saw them become the first side to reach 40 points from 14 games, and maintains the advantage of eight points over Manchester United that they had at the start of the week.

No width out left, but City find a way

Earlier this month, Guardiola said he could not play Sergio Aguero and Gabriel Jesus together without the width of Mendy on the left.

With Mendy a long-term absentee and Sane not fit enough to make the squad, Guardiola asked Jesus to fill in on the left against Saints, with Aguero in the middle.

David Silva, who so often sets the tempo for City’s attacks, began the game on the bench and it all left City looking less than fluid going forward.

They struggled to break down a Southampton side that put 11 men behind the ball and although they still created enough chances to keep Forster busy, many of their efforts were from distance and easily saved.

Even after Van Dijk had sliced into his own net, City rarely looked like making the game safe, with misplaced passes bringing groans of frustration from their fans.

Forster’s best save of the night saw him deny Jesus after Aguero sent him running clear but, for the third time in a week, City were grateful to Sterling for turning an unconvincing performance into a victory.

Southampton came agonisingly close to stopping the City juggernaut, and will feel they deserved to leave the Etihad with a point.

It might even have been more had they taken their chances from corners in the first half, with Wesley Hoedt heading against the bar and Maya Yoshida firing over from close range.

Saints boss Mauricio Pellegrino, a former team-mate of Guardiola at Barcelona, has been criticised for his defensive approach but got his team selection and tactics spot on here.

Southampton did not manage anywhere near the same level of threat as they did in their 4-1 win against Everton on Sunday, when all 10 of their starting outfield players managed a shot on goal.

But this was a very different standard of opposition and Pellegrino and his players rose to the challenge – they were superbly disciplined at the back and a threat when they put the ball into the box.

Man of the match – Raheem Sterling

Manchester City play West Ham at home on Sunday (16:00 GMT KO), the first of nine games for Guardiola’s side in December.

Quadri vows to revenge in ETTU Champions League
Manchester United “should have been smoking cigars” in their Premier League victory over Watford, manager Jose Mourinho said.
What do you think Messi take during Barca vs Olympiacos tie?
Premier League stats: Romelu Lukaku, Man Utd, Man City, Mohamed Salah
Marcus Rashford inspired by Brazil legend Ronaldo
Arsene Wenger praises Arsenal character in another comeback victory
Mourinho says he has no idea when Pogba will be fit
Premier League Guardiola encouraged as Man City maintain lead Manchester City manager Pep Guardiola was heartened by the way his side stayed five points clear at the top of the Premier League table despite making hard work of a 3-2 victory away to West Bromwich Albion on Saturday.
Arsenal Giroud wins 2017 FIFA Puskas award for goal of the year
Manager David Moyes felt West Ham’s crowd played a big part as the Hammers came from behind to earn a point against Leicester in his first home game in charge.
India rounds up beggars ahead of Ivanka Trump’s visit
West Ham defender Jose Fonte ruled out for 2-3 months
Klopp must take blame for Liverpool ’s poor defence – Schmeichel
Tottenham’s Dembele eyes start against Arsenal
Slaven Bilic: West Ham sack manager with team in the relegation zone
Premier League Arsenal rally to mark Wenger landmark with Swansea win Arsenal celebrated Arsene Wenger’s 800th Premier League game as manager with a win but only after coming from a goal behind to beat Swansea City 2-1 at the Emirates Stadium on Saturday.
Pogba shows off his latest crazy haircut
Harry Kane to miss Old Trafford Clash
15 of the best places to have a Christmas vacation