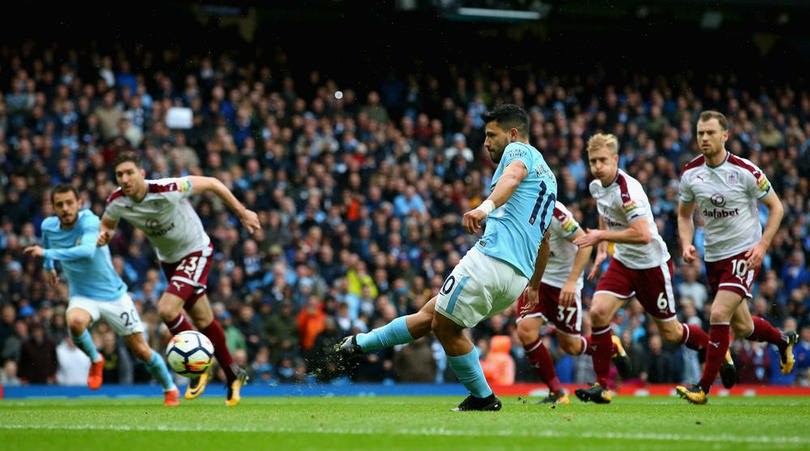 Sergio Aguero is Manchester City’s joint-top scorer of all-time after netting his seventh Premier League goal of the season against Burnley on Saturday.

Aguero’s first-half penalty versus Sean Dyche’s side, which came on his first appearance since breaking a rib in a car accident three weeks ago, moved him on to 177 goals in all competitions for City – level with long-time record holder Eric Brook.

The 29-year-old opened the scoring in the 30th minute at the Etihad Stadium, sending Nick Pope the wrong way after the Burnley keeper brought down Bernardo Silva.

Brook represented City between 1928 and 1940, winning the FA Cup and First Division title, and has been unchallenged at the top of the club’s standings for 79 years.

The former England international amassed his overall tally across 453 games, but Aguero has raced to the same number in 262 appearances.

The Argentina star has won two Premier League titles and the same number of EFL Cups since joining City as a club-record signing from Atletico Madrid in 2011, famously clinching the first of those honours with a dramatic winning goal deep into stoppage time against Queens Park Rangers on the final day of the 2011-12 season.

In Saturday’s tie Guardiola’s men failed to scale the dazzling heights of recent performances, with a tenacious and disciplined Burnley display causing them moments of discomfort before quickfire goals from Nicolas Otamendi and Leroy Sane made victory safe inside the final 20 minutes.

The undefeated league leaders move on to eight wins from nine and Manchester United’s surprise 2-1 reverse at Huddersfield Town means an increase in their early control of the title race.

Aguero opened the scoring with a 30th-minute penalty after Bernardo Silva went down under a challenge from Nick Pope, the Burnley goalkeeper who then produced a pair of brilliant saves to prevent the Argentina striker from surpassing Eric Brook’s all-time City record of 177 goals.