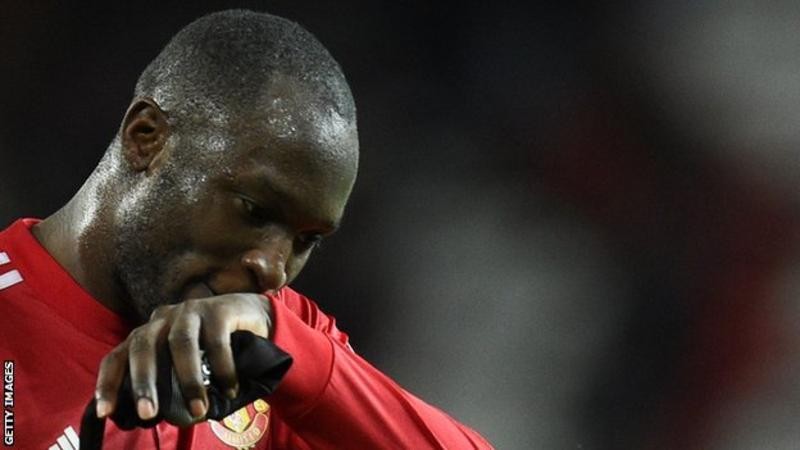 Romelu Lukaku’s struggles in front of goal continued at the weekend.

The Manchester United striker has lost his way after a superb start at Old Trafford, but are fewer chances falling his way lately? Is there a lack of effort?

BBC Sport takes a look at some of the statistics from the latest action in the Premier League.

Lukaku losing his way… or is he?

Manchester United’s £75m signing of Romelu Lukaku from Everton was the biggest outlay by an English club in the summer, and the Belgian was charged with leading the line at Old Trafford.

His Red Devils career started in blistering fashion with seven goals in his first six league games, which included five victories and a draw.

But the goals have since dried up, with Lukaku scoring just once – against Newcastle – in his past six league appearances.

And the stats show the number of shots he has attempted in that period (16) has dropped dramatically from his opening seven games (31).

The 24-year-old has also had fewer touches in the box on average (four) than when he was scoring regularly (six).

The largest drop, though, is in the number of ‘big chances’ – described by statisticians Opta as “clear-cut opportunities our analysts would expect players to score”.

Lukaku has had just three in his past six games, compared to 12 in his first seven. In the defeats by Huddersfield and Chelsea, the draw with Liverpool and the win over Tottenham, he did not have any.

His ‘expected goals’ have fallen too.

So are his team-mates at least as culpable as he is?

His barren run coincided with midfielder Paul Pogba’s absence through injury, while playmaker Henrikh Mkhitaryan’s form dipped – he has created three chances in his past five appearances having provided five in United’s opening three matches.

Lukaku cannot be faulted for his effort either. In Saturday’s 1-0 win over Brighton, he ran 9.74km – further than in any other match this season.

Played 13, won 12, drawn one. Manchester City are running away with the Premier League title.

Pep Guardiola’s side came from behind at Huddersfield on Sunday to win a top-flight game in which they trailed at half-time for the first time since April 1995.

The 2-1 win was their 11th consecutive away victory in all competitions – a record for a top-flight English club – and they extended their unbeaten run in the league to 21 games, stretching back to last April.

Their points tally of 37 after 13 games is the best in the Premier League era, and matched only by Liverpool’s tally from the 1990-91 campaign.

It feels as though David Unsworth has been in charge of Everton for an eternity – and the club’s search for a permanent manager to replace Ronald Koeman shows no signs of ending.

In the history of the Premier League, caretaker jobs often last between one and 34 days. Unsworth has had the role for 35 (and counting).

In that time he has presided over seven games in all competitions, winning one and shipping 19 goals.

Unsworth, though, has a long way to go to surpass David Pleat’s record at Tottenham. He took charge for 256 days from September 2003 to June 2004. Pleat’s full-time successor, Jacques Santini, lasted just 155 days.

“It’s killing me,” said Unsworth. “I take responsibility, but we all have to as well. We are in a tough place and things have to change quickly.

“Confidence is as low as it has ever been. The club has to decide and the sooner that happens the better. The players need this resolving.”

But could Unsworth become the first caretaker manager to be sacked?

Late is great for Palace

Crystal Palace fans have suffered this season – they had to wait eight league games to see their side score.

But results have picked up since Roy Hodgson took over from Frank de Boer in September – eight points in nine games leaving them just three points from safety.

Saturday’s 2-1 defeat of Stoke was just their second league victory of the season, and Mamadou Sakho’s goal was the first 90th-minute winner the Eagles have scored at home in the Premier League since Clinton Morrison’s strike against Sheffield Wednesday in May 1998.

Haunted by the old boys

What if Chelsea had kept Lukaku, Kevin de Bruyne and Mohamed Salah? A popular question this season.

On Saturday, Salah showed his old club what they are missing by scoring the opening goal in the Blues’ 1-1 draw at Liverpool. It was his 15th goal in all competitions since signing for the Reds from Roma in the summer.

Salah is the 20th former Chelsea player to score against his old club in the Premier League, with Fabio Borini the most successful, netting three times for Sunderland against the Blues.

Premier League Merseyside misery as Liverpool and Everton lose heavily Defensive frailty has long been a problem for Liverpool and they found themselves 2-0 down inside 12 minutes as Spurs…
Manchester City manager Pep Guardiola said his side “competed amazingly” as they fought back from 1-0 down to win at Huddersfield.
Pacers too good for Kings in Indiana
West Ham defender Jose Fonte ruled out for 2-3 months
WNBA Finals Game 4 by the numbers
Rooney party girl renames him ‘Mr Shrek’
Premier League Arsenal rally to mark Wenger landmark with Swansea win Arsenal celebrated Arsene Wenger’s 800th Premier League game as manager with a win but only after coming from a goal behind to beat Swansea City 2-1 at the Emirates Stadium on Saturday.
Aguero becomes joint-top scorer in Man City history
Paul Pogba dedicates goal to migrants sold as slaves in Libya