Premier League Guardiola encouraged as Man City maintain lead Manchester City manager Pep Guardiola was heartened by the way his side stayed five points clear at the top of the Premier League table despite making hard work of a 3-2 victory away to West Bromwich Albion on Saturday. 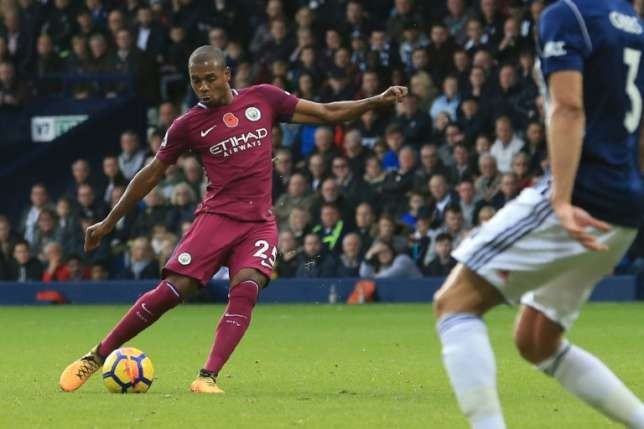 Manchester City manager Pep Guardiola was heartened by the way his side stayed five points clear at the top of the Premier League table despite making hard work of a 3-2 victory away to West Bromwich Albion on Saturday.

Guardiola left City’s joint all-time leading goal-scorer Sergio Aguero on the bench but his side still struck twice in a frantic five minutes at the Hawthorns which featured three goals in all.

But come the 15th minute, City were 2-1 up after Fernandinho let fly with a speculative shot that deflected off Gareth Barry and went in off the post.

City substitute Raheem Sterling gave the visitors a two-goal lead in the 64th minute only for the Baggies’ to pull a goal back late on through Matt Phillips after a defensive blunder by Nicolas Otamendi.

“You cannot win all the time by four, five, six goals, that is unrealistic,” said Guardiola, whose side have won 28 points from a possible 30 in their opening 10 league games this season.

“It’s important when you make a good performance you win comfortably and when you don’t play at the high level you’re able to win.”

‘Last ball of their careers’

Manchester City striker Sergio Aguero, pictured on October 24, 2017, has yet to score his 178th goal and break the Manchester City record set by Eric Brook in 1939

“Today, every ball looked like the last ball of their careers,” said United manager Mourinho, who slammed his players’ attitude following a shock 2-1 loss to Huddersfield last week.

This was Spurs’ second defeat of the week after their League Cup loss to London rivals West Ham.

“It was our mistake,” said Spurs boss Mauricio Pochettino after his defence failed to deal with a long clearance from United goalkeeper David De Gea that Romelu Lukaku headed on to Martial.

Arsenal moved to within a point of north London rivals Spurs after coming from behind to see off struggling Swansea 2-1.

The Gunners fell behind when Sam Clucas put the visitors 1-0 up in the 22nd minute.

But Arsene Wenger’s men were back on level terms early in the second half at the Emirates when Sead Kolasinac rifled a shot past former Arsenal goalkeeper Lukasz Fabianski from 15 yards out.

Kolasinac then turned provider for Aaron Ramsey as the Wales midfielder made it 2-1 in the 58th minute.

Reigning champions Chelsea in turn went level on points with Arsenal after Eden Hazard’s 51st-minute goal proved decisive in a 1-0 win away to Bournemouth in Saturday’s late kick-off.

The Blues are now nine points off the summit and Hazard, asked if Chelsea could catch City, replied: “The season is long, you never know what can happen.”

Crystal Palace striker Wilfried Zaha gestures at the final whistle after scoring against West Ham, turning a loss into a draw, in south London on October 28, 2017

Liverpool, fresh from an embarrassing 4-1 loss to Tottenham, beat Huddersfield 3-0 despite Mohamed Salah missing a first-half penalty in a match that pitted Reds manager Jurgen Kloppagainst Terriers boss David Wagner — the best man at his wedding.

Daniel Sturridge broke the deadlock five minutes into the second half before Roberto Firminodoubled Liverpool’s lead in the 58th minute with a header.

Georginio Wijnaldum then added a third late on and Klopp said: “We were more direct (in the second half) and now it is a nice day!”

Wilfried Zaha’s goal in the seventh minute of stoppage time saw basement club Crystal Palace come from 2-0 down to salvage a 2-2 draw with West Ham at Selhurst Park.

“It feels like a defeat,” said under-pressure Hammers boss Slaven Bilic, but Roy Hodgson reckoned a draw was the least his Palace side deserved from a game “where you only faced two shots and you’ve had 20-odd, and hit the post and had one cleared off the line”.

Cristiano Ronaldo Real Madrid star takes his family to dinner at London restaurant after Best FIFA Award win Ronaldo and Ramos dined together with their partners at the restaurant after the ceremony.