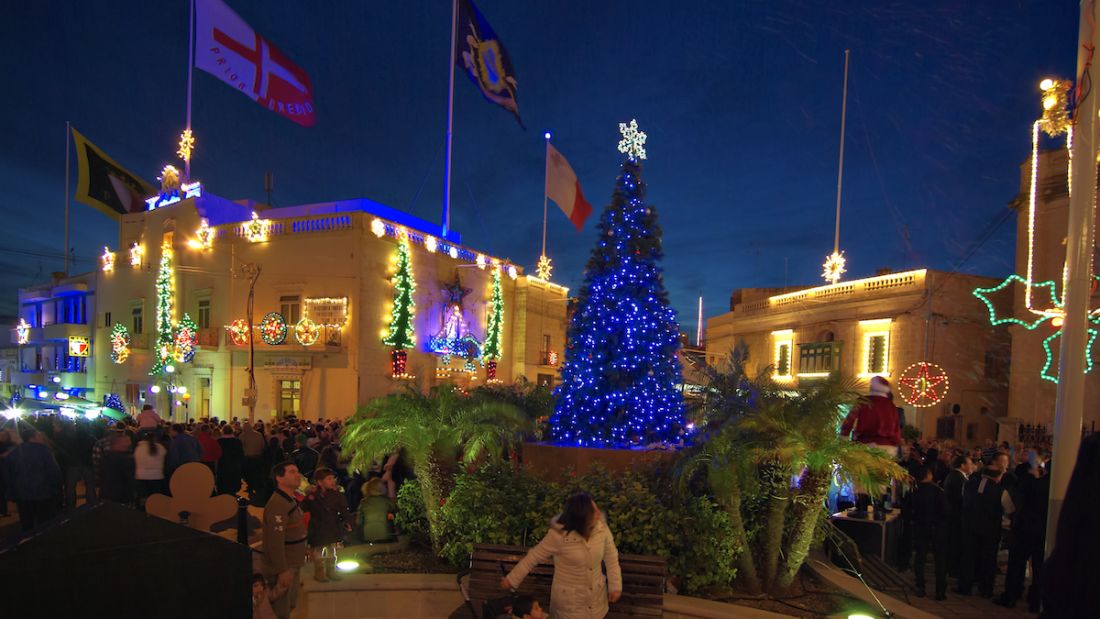 15 of the best places to have a Christmas vacation

Anyplace can string up a few lights and call it a holiday celebration. When you travel, you want more.
From Mexico to Malta and northern lights to sunny skies, these 15 destinations celebrate Christmas better than the rest:

Visiting presepju, or nativity scenes, is an integral part of Christmas in Malta. Every year, residents proudly open their shutters, and sometimes even their garage doors, to display their holy crib confections to the public.
On a grander scale, the Bethlehem f’Ghajnsielem is a life-size nativity spread over 20,0000 square meters of formerly abandoned fields.
Inhabited and animated by more than 150 actors, including entire families, the village takes visitors back in time to Judea of 2,000 years ago, complete with oil lamps, turn mills, grazing animals, crafts areas teaching traditional skills and folklore, a tavern and, of course, a grotto housing baby Jesus.
Downtown Valletta is also home to a lively Christmas spirit, with carolers singing outside the Baroque St. John’s Co-Cathedral during Advent, and a dizzying display of Christmas lights on Republic Street.
The Manoel Theater is well known for its annual Christmas pantomime.
A visit to the privately owned Malta Toy Museum, featuring dolls, soldiers, train sets, and clockwork tin trinkets dating as far back as the 1790s, is a heartwarming homage to childhood.

Rockefeller Center lies at the core of the New York Christmas. Its famed ice rink has been around for 80 years; the decorated tree has been a holiday tradition since 1931. Across the street, Radio City hosts the annual Christmas Spectacular, starring the Rockettes.
On the southwest corner of Central Park, Columbus Circle hosts more than 100 vendors selling clothes, gifts, snacks and drinks at the Holiday Market.
Central Park has two ponds for skating and horse-drawn carriage rides.
Related content

What to do and where to eat in Central Park

Fashion’s biggest names join in the festivities, setting up impressive Christmas window displays. The most glamorous cases, at the Fifth Avenue flagships and department stores such as Saks and Bergdorf, are impressive enough to melt the heart of Anna Wintour.

Plunge into Christmas in Bath, England.
Bath Tourism
There are few cities in the world where you can celebrate the birth of Jesus and the birth of Jane Austen with the same amount of fanfare, but Bath, England, happens to be one of them.
2017 marked the 200th anniversary of the much-loved writer’s death, and while the main Austen love-in is during a festival in September, the Jane Austen Centre — and on-site Regency Tearoom — is the best place to learn about the city’s most famous resident.
The Theatre Royal, which Austen mentions in “Northanger Abbey” and “Persuasion,” has a varied program of holiday drama, musicals, opera and concerts.
The Bath Christmas Market has more than 170 wooden chalets selling distinctively British handmade crafts in a quaint Georgian setting. Straddled between the imposing Bath Abbey and the venerable Roman Baths, the market offers a festive way to discover the character of Bath, which is the only entire city in the UK to have been designated as a UNESCO World Heritage Site.
Bath on Ice (until January 2, 2018) is a great excuse to bundle up and lace up skates, while the Thermae Bath Spa is the perfect reason to strip down and savor the steam emanating from the thermal mineral-rich waters of an open-air rooftop pool with spectacular views over the city.

Barcelona’s Copa Nadal is a 200-meter swimming competition across the harbor on Christmas Day.
David Ramos/Getty Images
Anyone who can manage to extend their Christmas holiday until Three King’s Day (January 6 in 2018), can catch up with Melchior, Gaspar and Balthazar in Barcelona.
On the evening of January 5, they arrive at the city’s port on the Santa Eulalia — their very own ship — in bearded and velvet-robed splendor. Cannons are fired, fireworks are set off, and as the mayor hands them the keys to the city, the magic of the Magi officially commences.
They parade through the streets in a magnificent cavalcade of floats that includes camels, elephants, giraffes and dazzling costumes.

CNN’s Richard Quest soaks in the spirit of the Holiday season by heading to one of the most festive places in the world – Santa Claus Village in Finland.
While legends dating as far back as the 1820s cite the North Pole as the official home of Santa Claus and his jolly missus, the Finns would have us believe otherwise.
For them, Rovaniemi, Lapland, located just north of the Arctic Circle, is Christmas HQ.
Here, children make gingerbread cookies with Mrs. Claus, enroll in Elf School or take a calligraphy class and compose their Christmas wish lists with a traditional quill.
There are even seasonal positions available as elf workers in Santa’s post office.
Other area attractions include the Ranua Zoo, home to baby polar bears, wolverines and moose, and the Arktikum, a science center where the mystery of the northern lights is revealed.
Those in search of a truly frosty experience can stay in the Arctic Snow Hotel, made entirely of snow and ice, but equipped with saunas and hot tubs in which to thaw.

Can’t make to Germany? Other great Christmas markets around the world

The market’s 200 select vendors also put up fantastic displays as they compete for the Most Beautiful Stall Design award. The top three walk away with a gold, silver or bronze “Plum People” awards.
Adults can enjoy Nuremberg spicy gingerbread and mugs of mulled wine. For kids, there’s the Toy Museum, while the German Railway Museum is a hit with everyone.

Santa Claus dons his beach wear for the Christmas celebrations in Hawaii. What the Aloha State lacks in snow it more than makes up for in festive vibes of peace and goodwill.
The celebrations center around Honolulu City Lights, a monthlong Christmas display with an opening parade, live music and a 15-meter Christmas tree.
At 6 meters tall (almost 20 feet) Shaka Santa — Mr. Claus dressed down in red shorts and open shirt — takes pride of place downtown, seated next to his mu’umu’u-wearing wife,Tutu Mele.

Say “Joyeux Noël” in Quebec City, Canada.
Courtesy la ville de Quebec
A haven for environmentally friendly, outdoor enthusiasts, Quebec bustles with winter activity, offering holiday programs for all tastes.
Old Quebec is turned into a picturesque Christmas village. Sausage and roast chestnut lovers can browse the wares at the German Christmas market.
The more religiously inclined can wander an exposition of nativity scenes from around the world. The nearby Sentier des Caps de Charlevoix offers family-friendly hiking, snowshoeing and skiing, while speed devils can zoom around in a snowmobile from Nord Expe.
And when Christmas is over, there’s Quebec Winter Carnival from January 26 to February 11, 2018.

When it comes to Christmas celebrations, Iceland has a few peculiarities.
Among these, 13 “Yuletide Lads” (scruffy Santas) are said to bring gifts to nice children for the 13 nights leading to Christmas.
Rows of small, beautiful huts make up the Yule Town Christmas market on Ingolfstorg. Here, visitors can pick up colorful Christmas gifts, decorations and treats.
Related content

5 places to visit in December (family and Christmas theme optional)

The shopping differs day to day as some craftsmen and designers set up stalls for only one day.
Beaming down onto a city covered in snow and Christmas lights, northern lights displays add to Reykjavik’s festival feel.

Pinatas, posadas and ponche sum up the festivities in this colorful Mexican city, where Christmas is both a solemn and celebratory affair.
Leading up to December 24, visitors are likely to stumble upon Mary and Joseph strolling the streets, as locals make pilgrimages from home to home, singing to “ask for posada” or “beg for shelter” as they re-enact the journey to Bethlehem.
Pinatas and ponche (a mulled fruit drink) cap a long evening of peregrinations around this cobblestoned city, designated a UNESCO World Heritage Site for its wealth of grand churches, well-preserved architecture and grand zocalos.

Is this Christmas or Halloween in Salzburg? You’ll have to go there to find out.
Sean Gallup/Getty Images
Birthplace of Mozart and filming location for “The Sound of Music,” Salzburg is chocolate-box perfect. Think snow-capped mountains, Baroque architecture and traditional Christmas markets.
It’s even the home of “Silent Night.” The popular hymn was performed for the first time in nearby Oberndorf on Christmas Eve 1918.
The town also plays host to a more unusual Yuletide tradition. Across Austria and Bavaria, in December people dress up as terrifying Alpine beasts known as krampuses and rampage through the streets in search of naughty children in need of punishment.
The Krampus Runs in Salzburg are held on various dates in December.

The town of Santa Claus was originally called Santa Fe, but that’s not half as much fun.
Courtesy Spencer County Visitors Bureau
Christmas is a year-round occasion in this town of fewer than 3,000 residents. Santa Claus, Indiana, gets thousands of letters a year from children trying to reach St. Nick himself. A group of volunteers called Santa’s Elves was set up in the mid-1930s to reply to each letter.
The Land of Lights display is a 1.2-mile drive around the Lake Rudolph Campground & RV Resort.
Among various Christmas-themed events, Santa hosts buffet dinners at Santa’s Lodge the first three weekends in December.

Strasbourg’s series of themed Christmas villages morph the city into a visual and gastronomic wonderland. Sp,e 300 stalls are spread out over 12 locations.
Each year, the city also celebrates the Christmas traditions of guest countries. In 2017, the city opens its arms to Iceland.
Alongside the traditional market, there’s the OFF alternative Christmas fair, featuring live music and a street art trail.

The traditional Christmas colors of red, green and white take on an entirely new meaning in New Zealand, where red represents the “pohutukawa” (New Zealand’s ruby-red flowering Christmas tree), white represents the pristine sandy beaches, and green? The kiwi, of course!
Sun-lovers who want to join Santa in his surf shorts should definitely head to Queenstown, where warm summer temperatures mean folks can jetboat, river surf or paraglide on Lake Wakatipu, or simply set up camp along the lakefront and enjoy a hearty Christmas meal of lamb, seafood and chicken on the barbie.