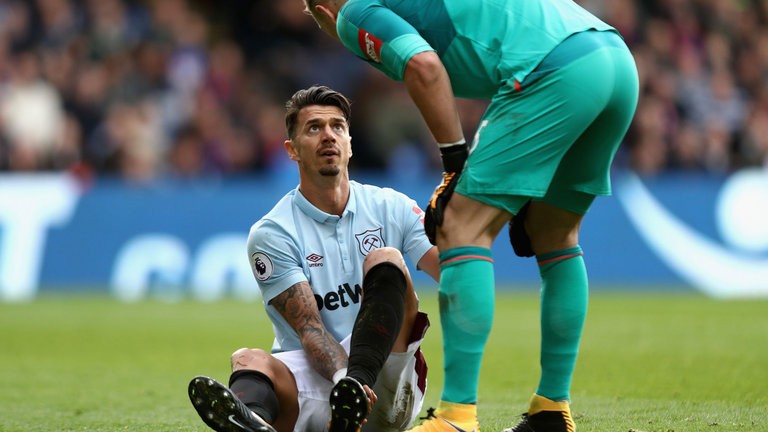 West Ham defender Jose Fonte has been ruled out for the rest of the year with a foot injury.

The 33-year-old limped off during last weekend’s 2-2 draw with Crystal Palace and revealed on Instagram he will be sidelined for two to three months.

Fonte is expected to miss at least 12 matches between now and the new year including Saturday night’s visit of Liverpool.

Fonte said on social media: “Difficult to digest but with my mind already focused on a quick recovery. I will be back stronger in 2 or 3 months. I look forward to the grind. Big win tomorrow would definitely help.”

The former Southampton captain was replaced by 18-year-old Declan Rice at Selhurst Park and Slaven Bilic will be hoping he can fill the void left by Fonte.

Rice, a Republic of Ireland Under-21 international, has already impressed when called upon by the first team this season.

He made his debut in the final game of last season against Burnley and has made eight appearances this term.

“Game of Thrones” Watch every death on GOT in fan-made compilation Every 174,373 death scene on “Game of Thrones” has been compiled by a fan of the show.
Hamilton wins U.S. GP but made to wait for title
Real Madrid superstar beats Messi, Neymar to win 2017 FIFA Best Player of the Year Ronaldo had a brilliant year, leading Real Madrid to a La Liga and Champions League double.
Everton sacks manager Ronald Koeman following poor start to Premier League season
WATCH CHRIS BROWN PERFORM A POP-UP SHOW IN NEW YORK
Cold night in Rome!!! AS Roma humiliate EPL champions Chelsea 3-0
Jose Mourinho Lukaku should be ‘untouchable’, says Manager Jose Mourinho says Romelu Lukaku should be “untouchable” after questioning his treatment by Manchester United’s fans for the second time in three days.
Aguero becomes joint-top scorer in Man City history
Kim Kardashian Reveals the Weirdest Thing Kanye West Does
Mourinho says he has no idea when Pogba will be fit
Premier League Guardiola encouraged as Man City maintain lead Manchester City manager Pep Guardiola was heartened by the way his side stayed five points clear at the top of the Premier League table despite making hard work of a 3-2 victory away to West Bromwich Albion on Saturday.
How to Manage Slump Months When Your Income Fluctuates
Rescue Mission: Overmars set for Arsenal return
Pacers and Cavaliers set for battle
Amosun, Dalung, Mohammed to cheer Joshua fight
Everything we know about ‘The Walking Dead’ season 8 so far
LISTEN/DOWNLOAD: Jeff Akoh – Lokoja [ALBUM]
Premier League Merseyside misery as Liverpool and Everton lose heavily Defensive frailty has long been a problem for Liverpool and they found themselves 2-0 down inside 12 minutes as Spurs…
Victor Moses Chelsea wing-back player ruled out for 4 weeks with hamstring injury After a scan, Chelsea initial diagnosis put the recovery time of the wing-back at a minimum of four weeks.
Share
Facebook
Twitter
WhatsApp
Pinterest
Linkedin
ReddIt
Email
Print
Tumblr
Telegram
Mix
VK
Digg
LINE
Viber
Naver
Previous articleJack Cork urges England youngsters to make most of loan spells
Next articleEuro Papers: Dele Alli emerges as a Real Madrid transfer target