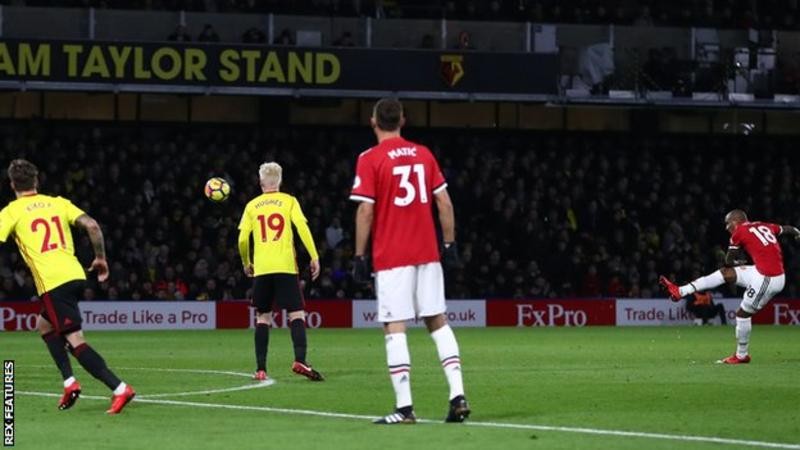 United led 3-0 after 77 minutes, but Watford netted twice in quick succession for a tense finish, before Jesse Lingard scored a stunning fourth for the visitors, picking the ball up inside his own half before driving forward into the box to settle the match.

Ashley Young scored twice against his old club, drilling in a precise finish from the edge of the box, before curling in a stunning 25-yard free-kick six minutes later and Anthony Martial tucked in a cool finish from 18 yards out.

Brazilian Richarlison looped a header against the crossbar for Watford, but Troy Deeney scored a penalty and Abdoulaye Doucoure poked home from inside the area with six minutes to go.

“The second half should have been five or six-nil, it was easier to score than the first. We missed chances,” Mourinho said.

“Out of nothing, they got a penalty for 3-1, then it was a different game. It was an easy match to win comfortably. At 3-2 the game is in the balance then Lingard had the initiative to kill the game.”

United cut the deficit to five points on unbeaten leaders Manchester City, although Pep Guardiola’s side can re-establish their eight-point advantage when they host Southampton on Wednesday.

The Red Devils had lost their two previous away games in the league at Huddersfield and Chelsea, with Guardiola’s City threatening to run away with the title having dropped just two points from their opening 13 games.

But United’s tally of 32 points after 14 games is their best since the 2012-13 season, Sir Alex’s Ferguson’s last in charge and their most recent championship triumph.

Current boss Mourinho is often criticised by supporters for his cautious approach, with Old Trafford legend Eric Cantona weighing into the debate this week by saying he prefers the “attacking football that Guardiola plays”.

He started with three at the back against the Hornets, which included Marcos Rojo’s first appearance since April because of a knee injury, and was vindicated by some clinical finishing.

Young, who started his career at Watford playing for the Hertfordshire club from 2003 to 2007, converted Lingard’s pass before netting a second into the top corner. He could have completed a hat-trick but struck the wall with a free-kick.

Frenchman Martial punished some poor Watford defending by stroking in his eighth of the season, the same total as in the whole of the last campaign.

But then United were holding on when Watford pulled to within a goal.

“We should be smoking cigars but then were in trouble,” Mourinho said.

However, his side saved their best for last as Lingard scored from a solo run having collected the ball 60 yards from the net.

“I saw the space open up in front of me and just went for it,” said Lingard. “Anything can happen in football, so when we conceded we just tried to keep our composure, and then, we tried to do the same when we went ahead again.”

Striker Romelu Lukaku’s blistering start since joining United featured 11 goals in his first 10 games, but he has now managed just one in his previous 11.

The stats show he has been provided fewer chances by his team-mates and attempted fewer shots at goal compared to when he was finishing with regularity.

Against Watford, the Belgian had two shots on target, one effort which was pushed away by goalkeeper Heurelho Gomes, who reacted sharply to keep out Lingard’s follow-up.

Lukaku’s lack of confidence was evident with 15 minutes to go when the ball was presented to him in front of goal, but he took too much time to set himself allowing the Watford defenders to retreat and clear.

Mourinho joked that there might be an easy solution to his striker’s lack of goals.

“He needs a big contract with boots. At this moment he doesn’t have a contract with any brand,” he said. “That is why he is playing with the black boots. He needs a brand to give him the right boots and to pay the right money, so he goes back to goals.

“Jokes apart, he works amazingly well for the team. I would never blame a player like him for that easy chance he missed. Never.”

United midfielder Paul Pogba should have got on the scoresheet too, but headed over from eight yards out.

A concern for United will be an muscular injury to midfielder Nemanja Matic, who hobbled off in the second half.

Watford manager Marco Silva was Everton’s first choice to take over from Ronald Koeman after overseeing an impressive start in which his side have collected 21 points from 14 games.

The Hornets play an enterprising brand of football, making use of Richarlison’s pace and trickery, while Kiko Femenia caused problems at times with his runs from wing-back.

Silva, though, needs to work on his side’s problems at the back having now let in 25 goals this term, including 12 from set-pieces – more than any other side.

They could have snatched something from the game after Rojo’s clumsy challenge on Pereyra allowed Deeney to net from the spot and midfielder Doucoure clipped in Andre Carillo’s cutback.

Deeney headed straight at David de Gea as they searched for the leveller, before Lingard struck.

Silva said: “We have to keep going, the result is hard to take for us, we didn’t deserve this result. In the end the quality was the difference, the individual players, but of course, the budgets of the clubs are so different.

“Now it’s the moment to rest our players and to analyse what we will do to compete again and show our fans what we can do.”

Deeney on the spot – the stats

Shots on Target
Home3
Away7

Fouls
Home12
Away10
Mourinho says he has no idea when Pogba will be fit
Premier League Arsenal rally to mark Wenger landmark with Swansea win Arsenal celebrated Arsene Wenger’s 800th Premier League game as manager with a win but only after coming from a goal behind to beat Swansea City 2-1 at the Emirates Stadium on Saturday.
Premier League With Steve Dede Mourinho still the man, Manchester City show vulnerability These are five things we learnt from the Premier League this weekend.
Klopp must take blame for Liverpool ’s poor defence – Schmeichel
Arsene Wenger praises Arsenal character in another comeback victory
EUFA Champions League Results (Full Time)
Harry Kane to miss Old Trafford Clash
Everton in hot pursuit for Onyekuru
Premier League Merseyside misery as Liverpool and Everton lose heavily Defensive frailty has long been a problem for Liverpool and they found themselves 2-0 down inside 12 minutes as Spurs…
WWE Raw