Manager David Moyes felt West Ham’s crowd played a big part as the Hammers came from behind to earn a point against Leicester in his first home game in charge. 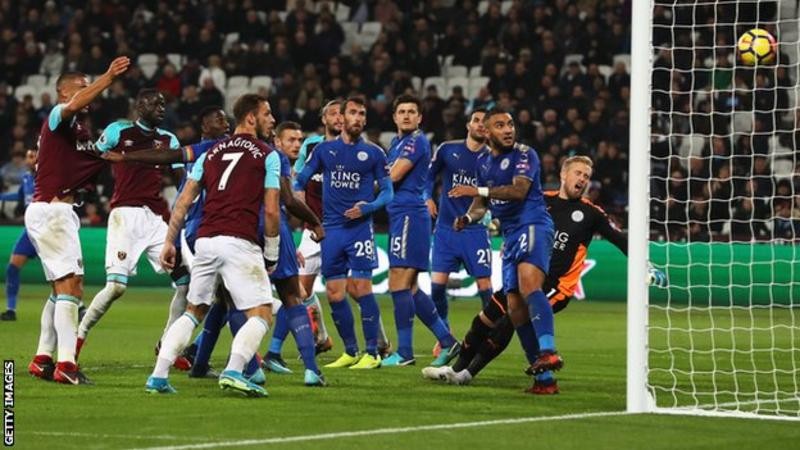 Manager David Moyes felt West Ham’s crowd played a big part as the Hammers came from behind to earn a point against Leicester in his first home game in charge.

Vardy went close to doubling the lead with a curling attempt before Kouyate got on the end of Manuel Lanzini’s corner.

West Ham, roared on by the home fans, were the better side after the interval but could not force a second goal.

They remain in the relegation zone but are now level on points with 17th-placed West Brom, while Leicester move above Newcastle United into 11th.

‘A tough place to come with a tough crowd’

Moyes described the point as “a start” and said of the Hammers fans: “They got right behind the players and the players gave them something back.”

He added: “The fans were fantastic, after all the negatives we heard, it was the opposite.

“When you come to play West Ham over the years, it has been a tough place to come with a tough crowd and they did that tonight.”

Leicester have taken five points in Claude Puel’s first four league games in charge yet the Foxes boss believes it should be more.

“The only disappointment is that we didn’t win,” said the Frenchman.

“We play well with the ball on the floor, press our opponents well and create chances to score. Now we must start to be more clinical.

“It’s disappointing because we had a lot of opportunities in the first half and we should have killed the game.”

Hammers respond well to going behind

This was a spirited performance from the Hammers which will give Moyes hope of steering the struggling club out of the bottom three.

In the 2-0 defeat at Watford in his first game in charge, West Ham’s heads dropped after conceding in the 11th minute.

Yet there was a determination about the hosts after the Premier League’s worst defence conceded for the 26th time in the league this season.

Winston Reid’s failure to close Jamie Vardy down allowed the England striker to cross. Angelo Ogbonna should have cleared yet lost his footing to allow Albrighton to slide home.

Kouyate headed the first Hammers goal of the Moyes reign from Lanzini’s corner, which lifted the atmosphere inside London Stadium.

West Ham fans spent the second half urging their team forward, substitute Andre Ayew going closest to a second with an overhead kick in stoppage time.

Although he went close to scoring the winner in the dying moments, Ayew was involved in two controversial incidents after replacing the impressive Marko Arnautovic.

The former Swansea winger appeared to dive to try and win his side a penalty when challenged by Harry Maguire on the edge of the Leicester penalty area.

Referee Martin Atkinson waved play on, although Ayew was booked moments later after a late challenge on Demarai Gray, who was also cautioned for reacting and shoving his opponent.

Leicester faded after a bright start yet remain unbeaten away from home in the league since 26 August.

Puel’s side could have climbed into the top half of the table with a win and they got off to the perfect start when Albrighton scored his first goal of the season.

Schmeichel did well to keep out Ogbonna’s header from a Lanzini free-kick before Leicester were undone from the same combination moments before the interval.

Vardy, Riyad Mahrez and Demarai Gray were dangerous on the counter-attack but the visitors, who had failed to register a shot on target in their previous game against Manchester City, struggled to threaten during a scrappy second half.

It’s back to familiar territory next for David Moyes as he takes West Ham to his former club Everton for a league game next Wednesday (20:00 GMT) before matches against Manchester City (away), Chelsea (home) and Arsenal (home).

LISTEN/DOWNLOAD: Jeff Akoh – Lokoja [ALBUM]
Russia will fail in efforts to undermine West – British PM
West Ham defender Jose Fonte ruled out for 2-3 months
WWE Raw
Mourinho says he has no idea when Pogba will be fit
Liverpool’s Lallana could return in November – Klopp
David Moyes West Ham appoint former Everton boss as new manager
Premier League Arsenal rally to mark Wenger landmark with Swansea win Arsenal celebrated Arsene Wenger’s 800th Premier League game as manager with a win but only after coming from a goal behind to beat Swansea City 2-1 at the Emirates Stadium on Saturday.
Arsene Wenger praises Arsenal character in another comeback victory
Kim Kardashian and Kanye West Enjoy Date Night Before Baby No. 3’s Arrival
Premier League Guardiola encouraged as Man City maintain lead Manchester City manager Pep Guardiola was heartened by the way his side stayed five points clear at the top of the Premier League table despite making hard work of a 3-2 victory away to West Bromwich Albion on Saturday.
Balotelli in special pose with second son Lion
Jose Mourinho Lukaku should be ‘untouchable’, says Manager Jose Mourinho says Romelu Lukaku should be “untouchable” after questioning his treatment by Manchester United’s fans for the second time in three days.
Everton in hot pursuit for Onyekuru
Harry Kane to miss Old Trafford Clash
Manchester City 3 Vs 1 Arsenal 5 things we learnt as Guardiola’s men continue dominance
Everton sacks manager Ronald Koeman following poor start to Premier League season
policeman who arrested Evans shot dead by kidnappers In Lagos
Premier League Merseyside misery as Liverpool and Everton lose heavily Defensive frailty has long been a problem for Liverpool and they found themselves 2-0 down inside 12 minutes as Spurs…