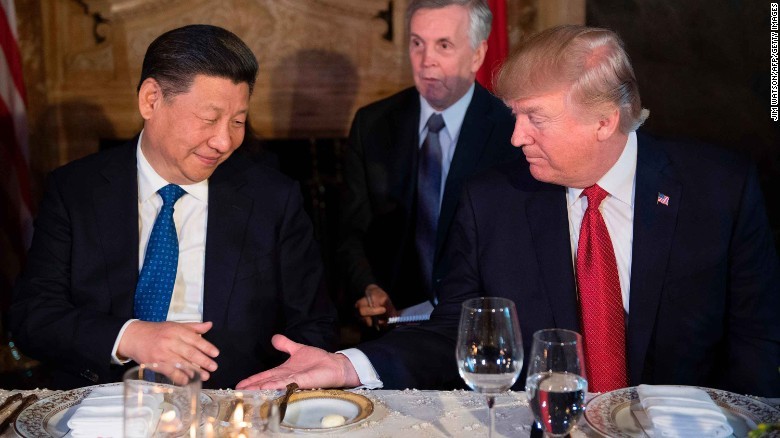 West Palm Beach, Florida (CNN)President Donald Trump said Thursday that he is “very disappointed” in China for allegedly selling oil to North Korea, tweeting that the on-again, off-again Trump ally was “caught red handed” allowing oil to be imported by the rogue regime.

The tweet, which came as Trump was on his golf course in Palm Beach County, comes after outlets in South Korea reported that satellites have spotted Chinese ships transferring oil to North Korean vessels. Trump said that if this practice continues, there will “never be a friendly solution to the North Korea problem.”
A White House official and multiple National Security Council officials were unable to explain the President’s tweet and did not respond to questions about whether he was referring to the recent reports from South Korea.
“Caught RED HANDED – very disappointed that China is allowing oil to go into North Korea,” Trump tweeted. “There will never be a friendly solution to the North Korea problem if this continues to happen!”
The tweet may be related to an ongoing debate within the Trump administration over how hard to hit China publicly over North Korea, according to a senior State Department official.
“We are aware that certain vessels have engaged in UN-prohibited activities, including ship-to-ship transfers of refined petroleum and the transport of coal from North Korea,” the official told CNN. “We have evidence that some of the vessels engaged in these activities are owned by companies in several countries, including China.”
“We condemn these acts and hope that any UNSC members, including China, work more closely together to shut down smuggling activities,” the official added, noting that the US urges “China to end all economic ties with DPRK, including tourism, and the provision of any oil or petroleum products, and expel all DPRK workers.”
The US Treasury Department announced in November that a series of North Korea shipping and trading companies had attempted to conduct a ship-to-ship transfer — likely of oil — to evade UN sanctions.
The same photos released at the time were used by South Korean outlets in recent reports.
The Treasury statement came alongside the announcement of a series of sanctions against a range of North Korean entities and individuals.
“As North Korea continues to threaten international peace and security, we are steadfast in our determination to maximize economic pressure to isolate it from outside sources of trade and revenue while exposing its evasive tactics,” Treasury Secretary Steve Mnuchin said at the time.
Chinese Foreign Ministry spokeswoman Hua Chunying denied that Chinese ships were found trading oil to North Korea. 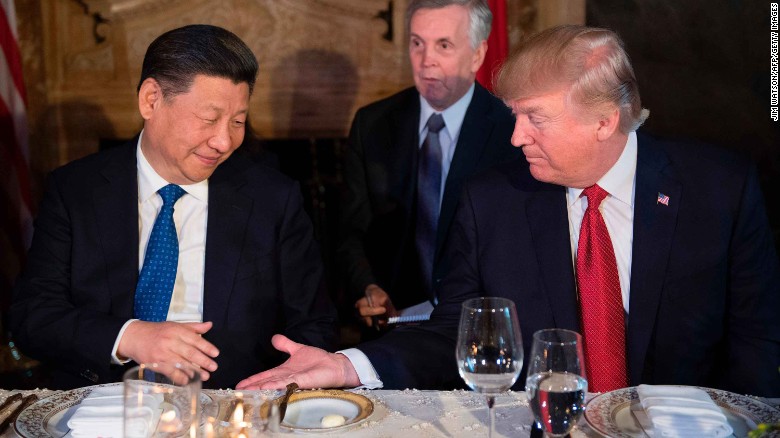 Trump to China: Thanks for trying with North Korea
“I am not aware of what you mentioned,” Hua said. “China’s relevant position remains unequivocal. I would like to reiterate that the Chinese government has been comprehensively, accurately, faithfully and strictly implementing the Security Council’s DPRK-related resolutions. Our attitude is earnest and serious, and our measures and actions are forceful and effective.”
She added: “If there is solid evidence proving that there is on the Chinese side any violation of the Security Council resolutions, China will surely deal with it in accordance with laws and regulations, and not a single case of violation should get away with it.”
Trump has had a mixed strategy with China ever since stepping into the White House earlier this year. Though he has feted President Xi Jinping in the United States and traveled to China to meet with Xi, he has also openly criticized the country’s trade policies and slammed China as having “no impact” on North Korea.
Trump’s key to North Korea, however, has long been China and his personal relationship with Xi.
Goodluck Jonathan I’m always close to tears when Nigerians say they want me back – ex-President
Israel plans a Trump rail station as Trump-naming frenzy sweeps country
US ready for North Korea talks without preconditions, says Tillerson
In China You get arrested for preaching the gospel This country is ranked 39 on Open Door USA’s World Watch List for countries suffering religious persecution.
US carriers in rare Pacific op amid North Korea tensions
Trump’s Mar-a-Lago Thanksgiving
James Mattis US Secretary of Defense says to discuss N. Korea threat on Philippines trip Trump and the North’s leader Kim Jong-Un have meanwhile traded threats of war and personal insults.
Trump trades ‘short and fat’ barb with N Korea’s Kim
US President to decide on North Korea terror list after Asia trip
A reporter who met with the former spy behind the Trump-Russia dossier explains why it’s not ‘fake news’
Sydney man charged with being ‘economic agent’ for North Korea
US tax bill: Republicans agree sweeping changes
Donald Trump arrives in S Korea with focus on Pyongyang
Photo: President Buhari pardons 500 prison inmates in Kano
In North Korea NATO chief calls ‘global threat’ during Japan visit NATO chief Jens Stoltenberg called North Korea a “global threat” Monday and said he backed tighter sanctions against it during a visit to Japan, which has been targeted by Pyongyang’s provocations.
Donald Trump lashes out at LaVar Ball for being ungrateful for his son’s release for shoplifting in China
US president jumps over China’s ‘Great Firewall’ with first tweet
Supreme Court lets full Trump travel ban take effect
US President stepped up praise for Xi ahead of China visit