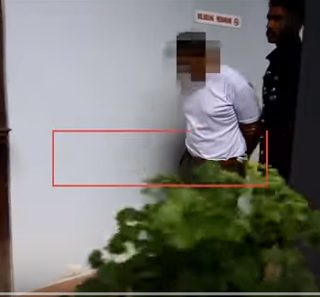 A trader was sentenced to 18 years’ jail and 10 strokes last Friday in Malaysia, for raping his 10-year-old daughter last September.

The judge ordered the sentence to begin from Oct 13, the date he was arrested.

The father of eight was alleged to have raped his daughter, then aged 10 years and four months, at an unnumbered house in Beris Kubur Besar, Bachok, between 9.30pm and 11.15 pm on Sept 22.

According to the facts, the accused had gone to his ex-wife’s house to fetch the victim to stay at his home before the incident happened but the victim refused to follow him.

However, after she was coaxed by her mother, she agreed to follow her father. About 11.30pm, when the victim was sent home by her sister, her mother noticed she was behaving differently and questioned her.

The victim then told her mother that she had been raped and that this was not the first time.
On Oct 12, the father went to the victim’s house again and wanted to take her to his house, but the mother refused to allow him to take the girl.

The mother then lodged a police report.
Deputy public prosecutor Siti Hajar Alias prosecuted while the accused was unrepresented

German court gives Swiss tax spy suspended sentence, fine
Stray cat a suspect in attempted murder In Japan
13-years old girl narrates how uncles took turns to rape her
Touching video of 8-year-old girl who suffered a brain aneurysm responding to her mother’s voice in the hospital
Photos/Video: Mother of two sentenced to 6 months in prison for insulting Prophet Muhammad
5 kid-robbers arrested by OPC members while burgling shop A gang of kid-robbers who invaded a shop late in the night in Ogun State were saved from lynching by men of the OPC after they were caught.
Chris Oyakhilome daughter &amp; boo are engaged!
Photo: House fire claims lives of father, mother and their three children in Jos, Plateau State
Deaths in Kogi State over Several Months Unpaid Salaries Worker Cry Out
Governor Ambode presents the 2018 budget to the Lagos State House of Assembly
Pierre-Emerick Aubameyang: How Afoty nominee helped put Gabon on the map
Antonio Guterres Trump says UN boss doing ‘very very spectacular job’ US President Donald Trump jettisoned his past criticism of the United Nations Friday, as he lavished praise on the organization’s Secretary General.
US tax bill: Republicans agree sweeping changes
The 5 best/worst Trump Thanksgiving tweets