US ready for North Korea talks without preconditions, says Tillerson 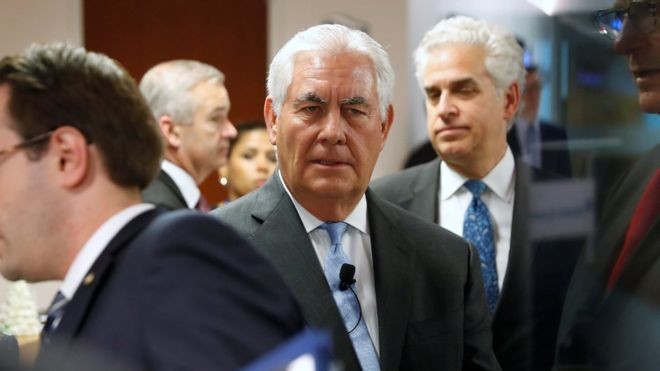 US ready for North Korea talks without preconditions, says Tillerson

The US is “ready to talk any time” with North Korea without preconditions, says Secretary of State Rex Tillerson.

His statement appeared to shift the US position away from previous demands that North Korea must disarm before any talks can be held.

North Korea’s pursuit of nuclear weapons technology has led to heavy US-led sanctions against the regime.

Diplomatic relations between the US and North Korea have been strained by recent North Korean nuclear and missile tests, and by a war of words between US President Donald Trump and North Korea’s leader Kim Jong-un.

Appearing to soften the US stance towards potential future talks, he said: “Let’s just meet and let’s talk about the weather if you want and talk about whether it’s going to be a square table or a round table if that’s what you’re excited about.

“Then we can begin to lay out a map, a road map, of what we might be willing to work towards.”

But he insisted that there needed to be a “period of quiet” first, without any nuclear or missile tests.

He added that economic and diplomatic sanctions would continue until “the first bomb drops”, and Mr Trump still wanted China – Pyongyang’s main economic ally – to cut off oil supplies to North Korea.

Mr Tillerson also said China had made contingency plans to accommodate North Korean refugees in the event of a conflict, a major concern for China.

“North Korea is acting in an unsafe way not only toward Japan, China, and South Korea, but the entire world. North Korea’s actions are not good for anyone and certainly not good for North Korea.”

On Wednesday, North Korean state media said leader Kim Jong-un had vowed his country would become “the strongest nuclear power and military power in the world”.

The UN’s Jeffrey Feltman said that while senior North Korean officials did not offer any commitments, they had agreed that discussions should continue.

“They agreed that it was important to prevent war,” he said, in his first briefing since his four-day trip last week.

“We’ve left the door ajar and I fervently hope the door to a negotiated solution will now be opened wide.”

Antonio Guterres Trump says UN boss doing ‘very very spectacular job’ US President Donald Trump jettisoned his past criticism of the United Nations Friday, as he lavished praise on the organization’s Secretary General.
White House: Jerusalem embassy move a ‘recognition of reality’
Donald Trump arrives in S Korea with focus on Pyongyang
US President to decide on North Korea terror list after Asia trip
President Trump signs new order to send American astronauts to the moon
Nobel Peace Prize winners warn the world is ‘one tantrum away’ from nuclear crisis
McMaster: Potential for war with North Korea ‘increasing every day’
Source: White House wanted to publicly shame Tillerson
White House says Trump, Duterte ‘briefly’ discussed human rights but Philippine spokesman says they didn’t
In North Korea NATO chief calls ‘global threat’ during Japan visit NATO chief Jens Stoltenberg called North Korea a “global threat” Monday and said he backed tighter sanctions against it during a visit to Japan, which has been targeted by Pyongyang’s provocations.
Trump-Russia Indictments, guilty plea in probe: What we know Two former Donald Trump associates were indicted Monday and it was revealed another has pleaded guilty to lying to FBI investigators, in the first substantial legal action stemming from the probe into Russia’s US election interference.
US to stop arming anti-IS Syrian Kurdish YPG militia – Turkey
‘When are they building your own statue?’ OAP Toolz asks comedian AY after he shared photo from his courtesy visit to Governor Okorocha
Trump all but endorses Roy Moore
Trump-Russia: Michael Flynn admits lying to FBI
The 5 best/worst Trump Thanksgiving tweets
Trump reportedly wants the State Department to release any Hillary Clinton emails it has left
Trump’s Mar-a-Lago Thanksgiving