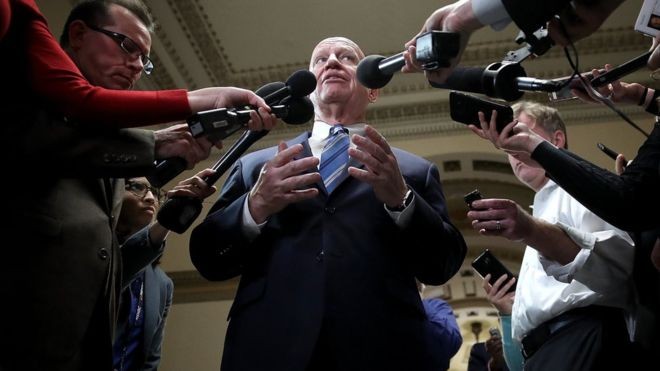 US Republicans from both houses of Congress have revealed their joint bill for the biggest overhaul of the country’s tax system in 30 years.

The plan brings the US corporate tax rate down to 21% from the current 35%.

President Donald Trump campaigned on a pledge to cut taxes, and passing the legislation marks a significant victory. He has said he wants the bill signed into law before Christmas.

Democrats have argued that the tax cuts will favour only the rich and offer little to the middle class. The non-partisan Joint Committee on Taxation said on Friday the measures would add as much as $1.4tn (£1tn) to the $20tn national debt over 10 years.

The Senate and the House of Representatives – which both have Republican majorities – are due to vote on the measures next week.

Friday’s agreement came after hours of talks in which the bill’s supporters sought to win over wavering Republicans.

Kevin Brady, Republican chairman of the House Ways and Means Committee, said he was “very excited about this moment”.

“It’s been 31 years in the making and took a lot of hard work,” he told reporters.

The pieces are falling in place for Donald Trump’s tax bill, which now seems almost guaranteed to become law.

This will certainly satisfy critics within the Republican Party, particularly the big-business donors, who were lamenting Congress’s inability to enact even modest parts of their party’s legislative agenda. The question, however, is whether the success here will do anything to reverse the president’s low poll numbers and dispel the growing consensus that Republicans are in for a rough ride in next year’s mid-term congressional elections.

At the very least this will make it easier for the party incumbents to survive primary challenges from anti-establishment outsiders who otherwise would have railed against a do-nothing Congress.

The tax bill’s overall unpopularity according to recent polls, however, may do little to improve the party’s standings in the eyes of the general public. Cutting corporate tax rates, whether or not it is in the long-term interest of the nation, is unlikely to capture the imagination of the average American.

Republicans are now in a position to fully take credit for a booming economy, however – and they have 11 months to make the case to voters that they deserve to stay in power.

The proposed new measures ran into opposition from a senior UN official on Friday, who said they could worsen social inequality in the US.

Philip Alston, the UN Special Rapporteur on Extreme Poverty who has been on a two-week fact-finding visit to US States, said the tax bill threatened to “blow apart” social welfare provision.

“The US Congress is trying desperately to pass a tax bill that, if adopted, would represent the single most dramatic increase in inequality that could be imagined,” he said.

Critics react to Trump’s tweet on firing Flynn
This story on Trump’s Russia paranoia is terrifying
Trump’s Mar-a-Lago Thanksgiving
First-day preorders for the iPhone X sold out at Apple.com in minutes (AAPL)
Stray cat a suspect in attempted murder In Japan
German court gives Swiss tax spy suspended sentence, fine
New York bombing suspect Akayed Ullah warned Trump on Facebook
Source: White House wanted to publicly shame Tillerson
White House Aide Omarosa resigns from the White House, to depart in January
Buhari President visits his farm in Daura ahead of France trip (Photos)
Donald Trump lashes out at LaVar Ball for being ungrateful for his son’s release for shoplifting in China
Hundreds block Guatemala roads to demand president step down Hundreds of protesters blocked roads in Guatemala on Tuesday to demand that President Jimmy Morales step down because of accusations of corruption stemming from his 2015 election campaign.
Trump US lawmakers deny Democrat’s bid to impeach President
In Niger Second US team operated near site of Niger ambush – Pentagon “There are other teams that operate in Niger. There was one that had something to do with this operation,” Joint Staff Director Lieutenant General Kenneth McKenzie said.
President Trump signs new order to send American astronauts to the moon
Trump retweets anti-Muslim videos
In Canada Improved economic outlook cuts budget deficit A surging Canadian economy has reduced the government’s budget deficit this year by billions of dollars, the finance minister said Tuesday.