US carriers in rare Pacific op amid North Korea tensions 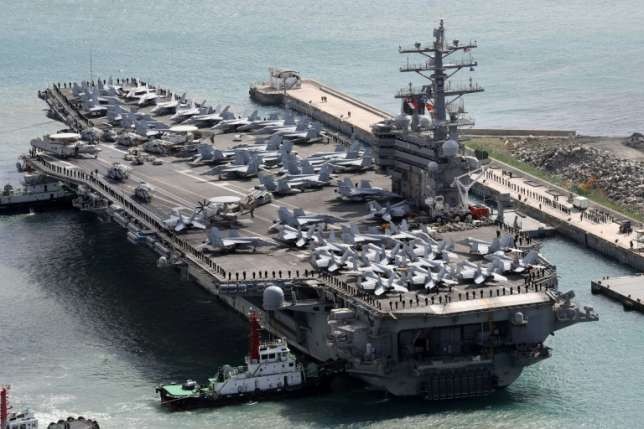 Three US aircraft carriers will stage joint drills in the western Pacific for the first time in a decade, the US Navy said Thursday, as tensions in the region over North Korea reach fever pitch.

The USS Ronald Reagan, USS Nimitz and USS Theodore Roosevelt will conduct “coordinated operations in international waters”, the navy said, as US President Donald Trump’s high-stakes trip through Asia takes him to China.

The operation shows Washington’s “ironclad commitment to the continued security and stability of the region,” said Scott Swift, commander of the US Pacific Fleet, in a statement.

On Wednesday, Trump warned North Korea not to “try” the United States but appeared to moderate his bellicose tone somewhat, offering Pyongyang’s young leader Kim Jong-Un a “path to a better future.”

The president meets Chinese leader Xi Jinping on Thursday for talks dominated by the threat posed by North Korea’s nuclear and missile programme.

Beijing and Washington have also been at odds over Chinese naval operations in the South China Sea.

The US warships will carry out air defence drills, sea surveillance, defensive air combat training and other training operations, the Navy said.

It is the first time three aircraft carriers have staged drills in the region since 2007, he added.

The operation will run between November 11 and 14.

US President stepped up praise for Xi ahead of China visit