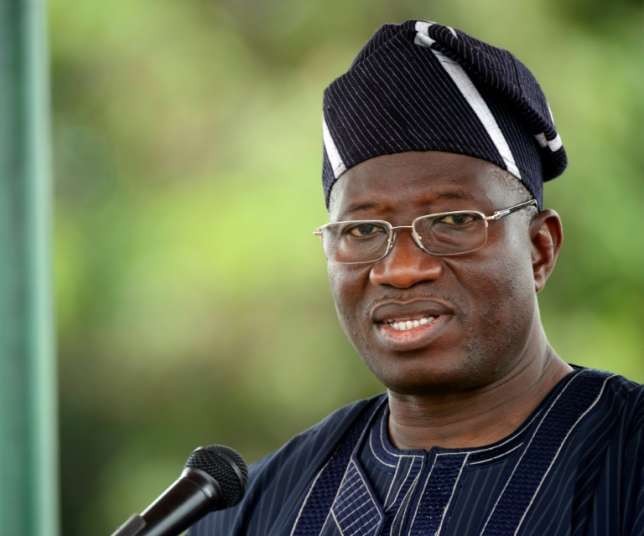 Ex-president Goodluck Jonathan says people have been asking him to contest the 2019 election.

Former President Goodluck Jonathan has said he’s mostly moved to tears whenever Nigerians demand for his return in 2019.

In an interview with Dele Momodu, the ex-president says people have been asking him to contest the 2019 election.

“People come to me every day saying they want me back. I’m always moved to tears whenever I go out and see the huge crowds shouting GEJ, we want you, even in the north.

“Instead of getting swollen headed, I actually reflect on my achievements and mistakes and feel humbled and feel very sober.

“I have never been a man of inordinate ambition. I’m a man of very modest means. I hardly travel because of the logistical costs. I’ve played my part and I have moved on,” he said.

On his possibility of contesting, he said: “I’m not God but I sincerely doubt the possibility.”

Speaking on what his reaction will be if Peoples Democratic Party gives him its presidential ticket in 2019, he said: “Are you not aware that our party has zoned the presidency to the north, and the chairmanship to the south?

“Even Fayose that has declared his interest may face big challenges because of the decision of our party.”

Catalonia Is Spain!’ Crowd chants at Barcelona rally That was a reference to the decision by Catalonia’s two biggest banks to move their legal headquarters to other parts of Spain in recent weeks due to the political tension.
AY Makun Comedian featured on CNN Marketplace Africa, talks hardships in Nollywood When asked about the impact of the recession in the country’s economy on business, AY noted that even his company suffered as did most companies in the industry.
In Kenya Second protester shot dead after fractious vote A second protester was killed in Kenya on Friday as anger raged a day after a divisive election boycotted by the opposition, taking the death toll from two days of protests to eight.
At least 20 people shot as gunman opens fires during church service n Texas
Christianity on Sex What does the Bible actually say about premarital sex? We look at nine bible verses concerning sexual relations before marriage.
10 things Nigerian women don’t know about Nigerian men There are a lot of things for women to figure out in men, here are ten of them
Dear Uriel, I love your ‘booby’ – Ruggedman
Goodluck Jonathan Ex-President says Buhari’s government is full of lies Goodluck Jonathan says the Buhari government thrives on lies and propaganda.
Photo of actresses Funke Akindele-Bello and Lolo at a party in Lagos today
Kenya Country waits for an end to presidential re-run Kenya’s election board is expected Monday to decide whether to reschedule a vote in flashpoint opposition areas or to push ahead with declaring victory for President Uhuru Kenyatta.
Antonio Guterres Trump says UN boss doing ‘very very spectacular job’ US President Donald Trump jettisoned his past criticism of the United Nations Friday, as he lavished praise on the organization’s Secretary General.
Khloe Kardashian Is Behind Your Favorite Kris Kardashian Meme
Hameed Ali Customs boss says PDP members ‘hijacked’ Buhari’s government Ali said the APC government “cannot move forward” because 50 percent of those in the current administration are from the PDP.
Tizeti partners Facebook to bring Nigerians affordable internet service The Express Wi-fi plans are affordable and range from N50 for 100MB to N2,000 for 10GB.
We’ll facilitate Joshua’s visit to Nigeria – Ogun govt
‘No automatic ticket for President Buhari in 2019’ Governor Rochas Okorocha says
Amazon is now the size of a small country
Why Nigerians are willing to die to get to italy
Share
Facebook
Twitter
WhatsApp
Pinterest
Linkedin
ReddIt
Email
Print
Tumblr
Telegram
Mix
VK
Digg
LINE
Viber
Naver
Previous articleWhen my father was sick, Bianca chose not to take care of him, rather she pleased herself’ – Ojukwu’s first son, Emeka Jnr speaks
Next articleDR Congo’s Kavumu child rape trial opens