President Donald Trump arrived in Florida Tuesday to celebrate his first Thanksgiving while in office, but he will spend it a little differently than past presidents — at his Mar-a-Lago residence surrounded by family and feast.

The first family will celebrate much like the rest of America, with a Thanksgiving meal, according to the White House. But the Trump celebration is expected to be an opulent affair, held inside the member’s only club in glitzy Palm Beach, surrounded by gold embellishments and crystal chandeliers.
Their Thanksgiving menu will include “all the traditional fare,” according to Stephanie Grisham, a spokeswoman for the first lady’s office. Included in the meal will be turkey, stuffing, mashed potatoes and gravy, sweet potatoes with marshmallows, baked good and cheese. The meal will also feature some non-traditional Thanksgiving items, including red snapper and Florida stone crab. 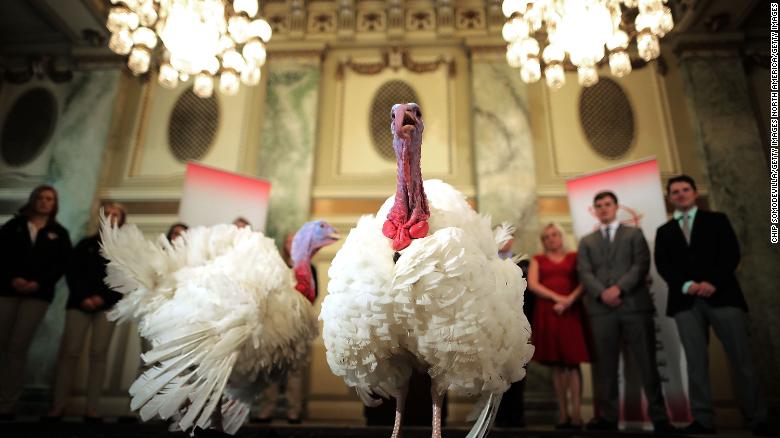 Last Thanksgiving, the Trumps dined on a total of 24 dishes featuring everything from the holiday’s traditional fare, such as roasted turkey and pumpkin pie, to an extravagant chilled seafood display and chef-carved leg of lamb and grilled diver scallops, per reporters traveling with Trump at the time.
When asked by CNN if the President’s adult children would be in attendance, the White House responded that the first family would be having “a nice Thanksgiving dinner with all the family.” 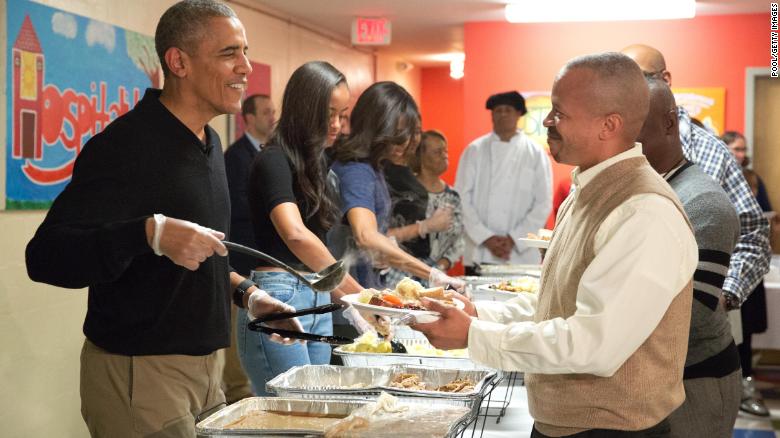 While there are certain annual presidential Thanksgiving customs, such as pardoning a turkey and indulging in food with family, Trump’s predecessors also had their own unique traditions for celebrating the holiday.
President Barack Obama opted to spend most Thanksgivings with his family in their upstairs residence at the White House, where Obama’s favorite dessert — pie — was always abundant, in at least six different flavors. 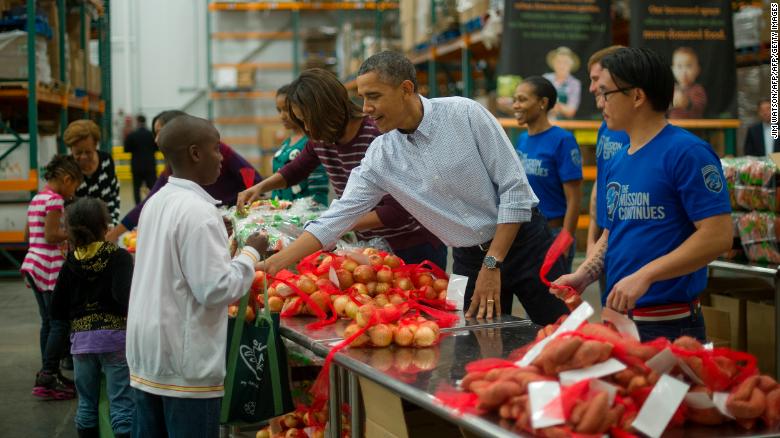 The Obama family also spent some Thanksgivings volunteering at shelters and serving food to the homeless and at-risk veterans.
President George W. Bush spent his Thanksgivings in office at both Camp David and his Crawford, Texas, ranch with his family. The Bushes preferred a more southern menu, featuring turkey with giblet gravy, prairie chapel bass, cornbread and mashed sweet potatoes with maple syrup and chipotle peppers. 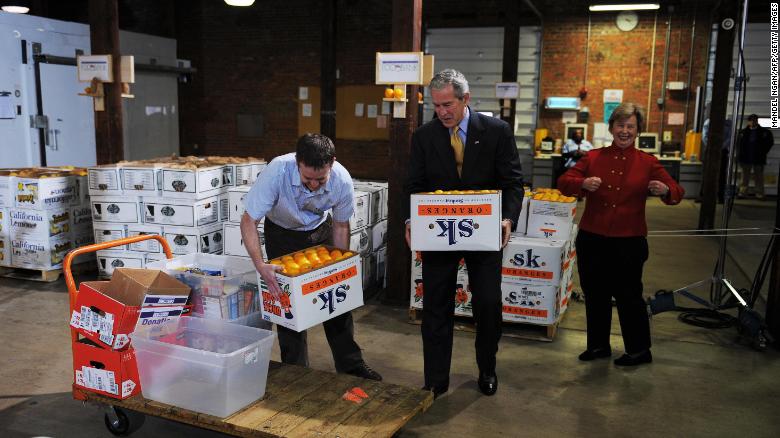 One agenda item for every former commander in chief’s holiday is to give thanks to US troops serving abroad, whether in phone calls or in person.
In 2003, President Bush surprised the world when he made a secret trip to Baghdad to visit troops at the height of the Iraq War, becoming the first sitting US president to visit the country.
“I was just looking for a warm meal somewhere,” Bush joked to the troops in 2003, adding, “I can’t think of a finer group of folks to have dinner with.” 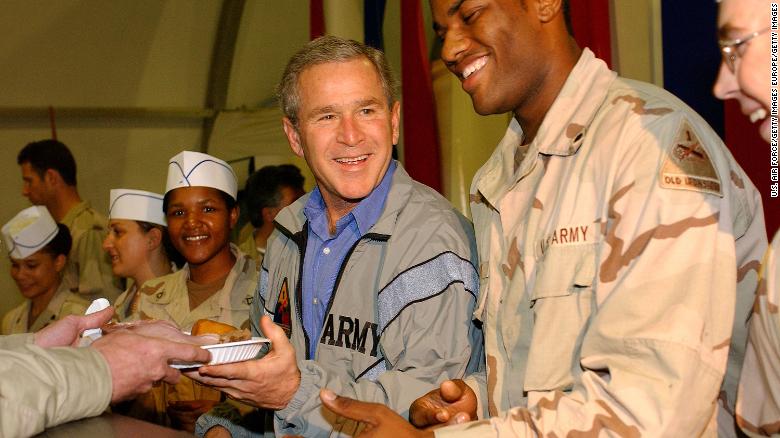 In other years, Bush and Obama both spent time during their holiday to call troops serving abroad — usually at least one or two from every military branch.
President Trump will also take time from his holiday to thank troops serving abroad Thursday, calling members of the military in Afghanistan, Iraq, on the USS Monterey, and in Turkey and Bahrain, the White House said.
Trump also announced on Twitter that he will also visit the Coast Guard Quarters nearby in Florida.
In his official Thanksgiving Proclamation, Trump also thanked all troops and veterans for their service.
“This Thanksgiving, in addition to rejoicing in precious time spent with loved ones, let us find ways to serve and encourage each other in both word and deed,” Trump’s proclamation said. “We also offer a special word of thanks for the brave men and women of our Armed Forces, many of whom must celebrate this holiday separated from the ones for whom they are most thankful.”
For his part, Trump and the White House say his time in Florida will be spent working. The President tweeted Wednesday he’ll be conducting meetings and working the phones from the so-called Winter White House in Florida, where he will be until Sunday.
Trump spent his first full day in Florida at his Trump International Golf Club in West Palm Beach, but the White House did not offer details on what he did during his nearly five hours at the club.
While Mar-a-Lago is open to members only, those finding themselves in Palm Beach for the holiday can opt for the club’s main rival as an alternative, The Breakers, which offers a Thanksgiving Day buffet for $150 a person.
US President stepped up praise for Xi ahead of China visit
Grace Mugabe The lavish former 1st lady of Zimbabwe who built a palace for herself
US President to decide on North Korea terror list after Asia trip
NSCDC arrests 5 persons with 2 truckloads of suspected stolen diesel In Delta State
Antonio Guterres Trump says UN boss doing ‘very very spectacular job’ US President Donald Trump jettisoned his past criticism of the United Nations Friday, as he lavished praise on the organization’s Secretary General.
Trump Jr US President’s son hinted at review of Russia sanctions act, says lawyer A Russian lawyer has said Donald Trump Jr suggested in a meeting during the US presidential campaign that a law imposing sanctions on Russia could be reviewed if his father were elected.
White House says Trump, Duterte ‘briefly’ discussed human rights but Philippine spokesman says they didn’t
Trump emissions threat to US car industry
Photos: Lagos Police Commissioner leads task force to visit Apapa-Kirikiri traffic gridlock
When my father was sick, Bianca chose not to take care of him, rather she pleased herself’ – Ojukwu’s first son, Emeka Jnr speaks
Bianca is Responsible for My Father’s Death – Emeka Ojukwu Jnr Speaks Out in Explosive Interview
Fadan Fashion week 2017
Donald Trump lashes out at LaVar Ball for being ungrateful for his son’s release for shoplifting in China
Trump plays round of golf with ‘wonderful people’ Shinzo Abe &amp; Hideki Matsuyama
Why I withdrew Governor Obiano’s security personnel – Police IG Speaks.
Pence US VP says 1983 bombing was opening salvo in ‘war on terror’ US Vice President Mike Pence described the 1983 bombing of a Marine Corps barracks in Beirut as the opening shots of the “war of terror” Monday, as he issued fresh warnings to Iran and Hezbollah.
Woman in court for alleged stealing fraud