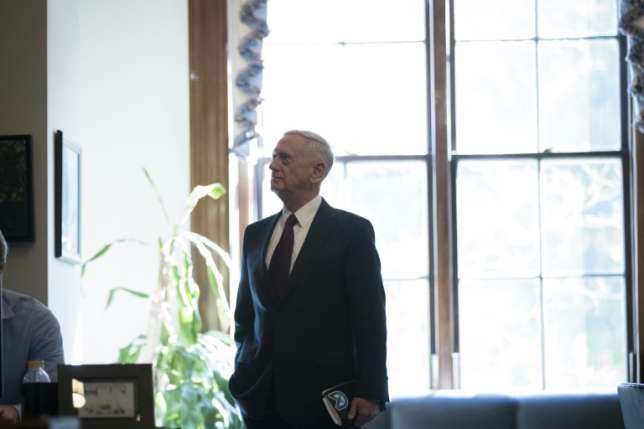 US Secretary of Defense James Mattis said Monday that curbing military threats from North Korea would be high on the agenda on his Asian tour this week, ahead of a visit by Donald Trump.

Tension has been high on the divided peninsula for months with Pyongyang staging its sixth nuclear test and launching two ICBMs that apparently brought much of the US mainland into range.

Trump and the North’s leader Kim Jong-Un have meanwhile traded threats of war and personal insults.

Mattis, on his way to the Philippines for security talks with Southeast Asian defence ministers, said he would discuss the “regional security crisis caused by reckless… North Korea” among other issues.

At the forum, Mattis is also expected to hold three-way talks with his counterparts from South Korea and Japan — key US allies in Asia — before visiting Seoul for annual defence talks.

“We will discuss… how we are going to maintain peace by keeping our militaries alert while our diplomats — Japanese, South Korean and US — work with all nations to denuclearise the Korean peninsula,” Mattis told reporters on his aircraft.

He stressed the international community’s goal was to denuclearise the flashpoint region, adding: “There is only one country with nuclear weapons on the Korean peninsula.”

Mattis’ visit to Seoul comes ahead of Trump’s first presidential trip to Asia next month, which also includes South Korea. All eyes will be on Trump’s message to the isolated North.

His recent remark that “only one thing will work” with North Korea fuelled concerns of a potential conflict.

But even some Trump advisers say US military options are limited when Pyongyang could launch an artillery barrage on the South Korean capital Seoul — only around 50 kilometres from the heavily fortified border and home to 10 million people.

The defence ministers from the 10-member Association of Southeast Asian Nations (ASEAN), meeting in the northern Philippine city of Clark ahead of talks with Mattis, issued a strong statement against North Korea on Monday.

“(We) express grave concerns over the escalation of tensions in the Korean Peninsula including the testing and launching by the Democratic People’s Republic of Korea (DPRK) of intercontinental ballistic missiles (ICBM) in addition to its previous nuclear tests and ballistic missile launches,” the joint declaration said.

“(We) strongly urge the DPRK to immediately comply with its obligations arising from all the relevant UN Security Council Resolutions.”

Mattis met with his counterparts from ASEAN on Monday afternoon.

Share
Facebook
Twitter
WhatsApp
Pinterest
Linkedin
ReddIt
Email
Print
Tumblr
Telegram
Mix
VK
Digg
LINE
Viber
Naver
Previous articleHamilton wins U.S. GP but made to wait for title
Next articlePence US VP says 1983 bombing was opening salvo in ‘war on terror’ US Vice President Mike Pence described the 1983 bombing of a Marine Corps barracks in Beirut as the opening shots of the “war of terror” Monday, as he issued fresh warnings to Iran and Hezbollah.