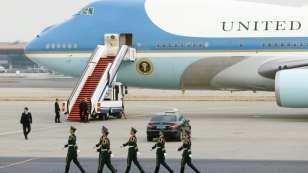 US President Donald Trump will decide whether to re-designate North Korea as a “state sponsor of terrorism” at the end of his tour of Asia next week, the White House said Wednesday.

The designation was lifted by then-president George W. Bush in 2008. Re-designation would put Pyongyang back on a formal blacklist that would incur more unilateral sanctions.

“The president said he’d make a determination at the end of the trip,” said White House spokeswoman Sarah Huckabee Sanders.

She spoke as Trump headed to Beijing for talks focused on the North Korea nuclear crisis after visits to US allies Japan and South Korea.

Trump will head to Vietnam on Friday before visiting the Philippines from November 12-13.

Trump enacted a law in August that was forced on him by the US Congress, pressing for new economic and political sanctions against Iran, Russia and North Korea.

One clause of that act required the US State Department to declare within 90 days whether North Korea should be named a terror sponsor.

The State Department said it calculated the deadline differently but no decision has been made so far.

A senior White House official said North Korea had been removed from the list under Bush “as part of a hopeful attempt to lure them into reversing the threat and of course that didn’t work out.”

“So I would remind that they clearly fit the criteria for state-sponsored terror in a previous administration,” the official said on condition of anonymity.

In Beijing, Trump will seek to persuade President Xi Jinping to do more to pressure his country’s Cold War era-ally North Korea to drop its nuclear ambitions.

China has supported a package of tough United Nations economic sanctions and imposed its own financial restrictions.

But the Trump administration says it could do more to reduce trade with North Korea, whose commerce overwhelmingly relies on its wealthier neighbour.

“I think that if you look at the activity across that (China-North Korea) border, certainly there is still some trade taking place,” the US official said.

“There are still some financial links that exist that should not under those resolutions. And of course China is doing much more than it’s ever done in the past,” the official said.

“It’s not the time for complacency, for allowing people to slip through loopholes, and for a lot of that residual activity to continue,” the official added.

“We’re going to work closely with the Chinese to identify that activity and end it.”

5 sacrifices you MUST make as an entrepreneur