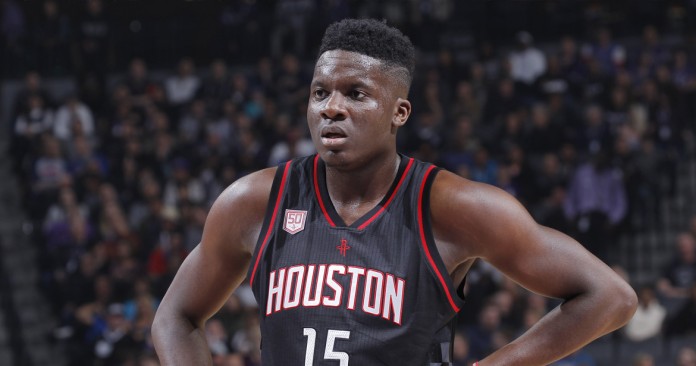 HOUSTON — Superstar guard James Harden called the Houston Rockets’ 116-108 win over the Golden State Warriors on Saturday night important “for our swag,” which was soaring after the Rockets claimed the regular-season series over the defending NBA champions.

“We’re confident because we know if we’re doing what we’re supposed to do, we’re going to beat them,” Rockets center Clint Capela told ESPN. “We’ve got to keep playing. We know that they’re going to come back if we have the lead, and we’ve just got to keep that mindset. Sometimes I feel like, in the past, we were all dragging down after mistakes. But today, we were ready. I think that if we’re doing what we’re supposed to do on defense — all the switches, the weak side — and keep playing our offense by keeping that mentality all game long, we have the weapons to beat them.

“We are better than them.”

Houston won two of three meetings with Golden State this season. The Rockets rallied from a 17-point deficit for a road win in the season opener despite Chris Paul playing on a bruised knee that sidelined him for the next month. Golden State won in Houston on Jan. 4 in a game in which Warriors star Kevin Durantand MVP front-runner Harden sat out because of injuries. The Rockets withstood a Warriors rally from a 17-point deficit, with the lead changing six times in the fourth quarter, to claim a tiebreaker that Houston hopes to make relevant.

“Mentally, now we have a chance to go after the No. 1 seed,” Rockets sixth man Eric Gordon said. “Because if it’s a tie at the end of the year, we have that edge. That’s why we all thought it was very important to win. Now that we’re healthy, I think that we’re going to get back to a big winning streak and get back to doing what we need to do, like we did earlier in the year.”

The Rockets (32-12) are 3.5 games behind the Warriors (37-10) for first place in the Western Conference standings and the league’s best overall record.

“That’s what we’re rooting for,” said Harden, who had 22 points and eight assists in his second game back from a strained hamstring. “It’s not going to be easy. Every single game, we’re going to have to take it for ourselves and not relax. It’s not about who we’re playing. It’s about us and each and every game getting better.”

The Warriors viewed Saturday’s game much differently, with several players dismissing its importance and saying the Rockets are not a concern.

“No,” Durant responded when asked if it mattered. “The season starts over when you’re in the playoffs anyway, so it doesn’t matter. You’re going to have to get through these teams to get to where you want to go. You have to play at home and on the road, so it really doesn’t matter. We just want to be playing good basketball when it comes down to that point.”

Warriors forward Draymond Green also played down the narrative that the Rockets had won a significant game Saturday.

“It’s game 40-what? Seven, eight?” Green asked during the media scrum. “Who we play on Tuesday? We just got to get ready for [New York]. Home court will take care of itself down the road.”

Gordon said the Rockets want to see the Warriors again in the playoffs, essentially an acknowledgement that a team must go through Golden State to get out of the West. And Gordon believes the Rockets would have a legitimate shot of ending the Warriors’ reign.

“We really do have that chance,” Gordon said. “Offensively, we’re just as good as them, no question. Defensively, they’re a championship team. They’re consistent, whether they win or lose. Us, we still have peaks and valleys. We just can’t have those. That’s why we’ve got to play well the next game, because we just have to sustain the same effort.”

The Warriors had dominated the Rockets the previous three seasons, winning 10 of 11 regular-season games between the teams and twice dismissing the Rockets in five-game playoff series. Houston general manager Daryl Morey has made no secret about his obsession with making up ground on Golden State, whose only postseason-series loss in the past three seasons was to the Cleveland Cavaliers in the 2016 NBA Finals. Morey is on record that he had the Warriors in mind during an offseason renovation that included a blockbuster trade for Paul and signing rugged role players Luc Mbah a Moute and PJ Tucker, who all played prominent roles in Saturday night’s win.

Morey posted a tweet after Saturday’s game, playing off his remark last month that his team is “obsessed” with beating the Warriors.

The Rockets are 17-0 when Harden, Paul and Capela play together, and Houston will finally have its full rotation available for Monday’s game against the Miami Heat, with wings Trevor Ariza and Gerald Green returning from two-game suspensions.

“We’re definitely the best in the league with everybody healthy,” Capela told ESPN after scoring 18 and recording a career-high four steals. “We’ve definitely got a chance to get that 1-seed back. The thing is, of course, we’re excited because it’s the Warriors, but Monday is an important game, too. If we lose and the [Warriors] win their game, what was the point? The next game, every single time, is going to be the key to go get the No. 1, first seed.”

Added Harden, who hit a dagger stepback 3-pointer with 1:10 remaining: “We’re confident. We’re just a confident group, especially with everybody healthy. We get Trevor and Gerald back, and then we’ve got a strong rotation where we’re very versatile. Obviously, [the Warriors are] a championship-caliber team for the past four years or whatnot. That’s what we’re trying to build our way up to.”

Paul, who pushed for a trade to Houston with hopes of finally getting past the second round of the playoffs in his 13th NBA season, emphasized the importance of the Rockets taking a short-term view after such an emotional victory. He dismissed a question about a potential playoff series against the Warriors.

“That’s a long time from now,” Paul said after his performance of 33 points, 11 rebounds, seven assists and three steals. “I’m trying to worry about Miami on Monday.”

D’Antoni also warned of the Rockets getting ahead of themselves, but he also said Houston had proven that this is “not the same old team.”

“You watch us play, and we’ve got a lot of stuff out there, but they’re still the champions,” D’Antoni said. “I was telling [the Rockets] during a timeout, ‘You’ve got to knock ’em out. It’s like a heavyweight fight. You don’t win on TKOs. You’ve got to knock ’em out.’ Tonight, we did, but that’s tonight. They’re missing [Andre] Iguodala, and they’ll be a different team when playoff time comes, but we have to be a different. At least we know that it’s within our locker room, a lot of this stuff that we can do.

“We’ve proven that we have something there. Now it’s up to us to do something.”

West Ham defender Jose Fonte ruled out for 2-3 months
Five of the best American cars
Arsenal should be targeting Anthony Martial rather than Henrikh Mkhitaryan – Charlie Nicholas
Everton Club ban fan who attacked Lyon player while holding child Everton on Friday banned a fan who appeared to try and strike a Lyon player while holding a child during their Europa League tie as UEFA opened disciplinary proceedings following the crowd trouble at Goodison Park.
Fire engineer dies as California’s Thomas Fire keeps burning
Manchester City 2-1 West Ham: David Silva scores late to equal record
Postnatal Pelvic flour routine
NBA star, Steph Curry fined $50K for throwing mouthpiece toward referee (Video)
How African rookies have started the season
Romelu Lukaku or Zlatan Ibrahimovic: Who should start for Man Utd against Man City?
Jennifer Lawrence Talks to Oprah Winfrey About Dealing With Abuse on Set and Reclaiming Her Sexual Freedom
Marcus Rashford inspired by Brazil legend Ronaldo
Fergie Recalls Crystal Meth Addiction: “I Was Hallucinating on a Daily Basis”
“The Illuminati is real. They’re trying to destroy me”: Rapper stitches says as he threatens to commit suicide
Check out the Christmas tree brows which have become the beauty trend for the festive season
Aggressive Horford turning back the clock
Benefits Of Having A Boyfriend That A Girl In A Relationship Must Know About.