Romelu Lukaku or Zlatan Ibrahimovic: Who should start for Man Utd against Man City? 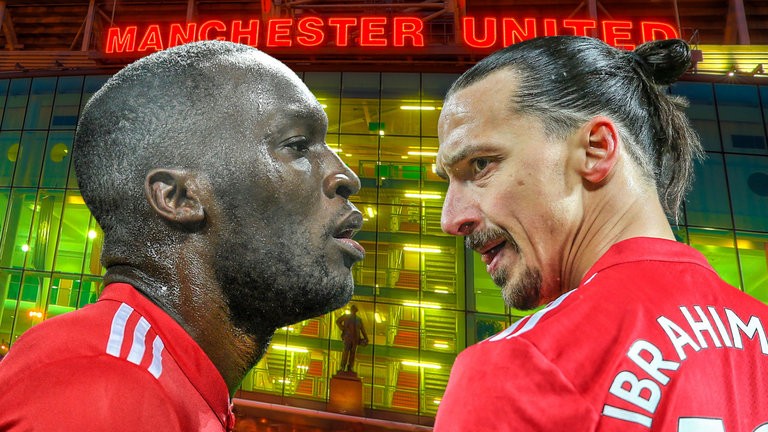 With Zlatan Ibrahimovic returning to fitness, Jose Mourinho has a big decision to make. Should he persist with Romelu Lukaku up front? Or is it time to unleash last season’s top scorer?

Lukaku made a blistering start to his Manchester United career, scoring 11 goals in his first 10 appearances, but he finds himself in the spotlight having only found the net twice in his last 12.

The pressure is heightened by Ibrahimovic’s return to the fold, with Mourinho confirming the Swede has a “big chance” of being available for Sunday’s Manchester derby, live on Sky Sports. So who should he pick?

The case for Lukaku

Lukaku has struggled in front of goal recently but his strike against CSKA Moscow could be exactly the boost he needed. “Make no mistake, that goal was as important as any goal that he has scored in his career,” said Jamie Redknapp on The Debate on Tuesday. “It will give so much confidence ahead of the Manchester derby at the weekend.”

Having only found the net once in his previous 11 appearances, Mourinho will be hoping Lukaku’s first goal in a month is the first step towards regaining his self-belief and rediscovering the ruthless streak that defined his first few weeks at the club. Indeed, United are already well-aware of just how clinical he can be.

Finishing aside, it is also worth remembering the important contribution Lukaku has made to United’s general attacking play in recent weeks. There was an assist in the 4-2 win over Watford, and he played a key role in United’s first and third goals against Arsenal. He even won the header which allowed Juan Mata to set up Marcus Rashford’s winner against CSKA

Lukaku has been criticised for his work-rate in the past but recent evidence suggests he is more than capable of providing the off-the-ball intensity Mourinho demands from his attacking players. Against Arsenal, when United employed the kind of high-pressing tactics they may look to use again against City, Premier League tracking data showed that only Lingard made more sprints than Lukaku.

The Belgian was similarly energetic against CSKA Moscow on Tuesday, and United will need more of the same at Old Trafford on Sunday. That level of intensity is something Ibrahimovic, 36 years old and only recently back from a serious knee injury, might not be able to provide.

He might not have youth on his side, but Ibrahimovic remains one of the most reliable goalscorers in the game. The Swede hit 28 of them last season, including a stunning volley the last time Manchester City visited Old Trafford. It was an example of his ability to conjure something out of nothing and also highlighted his tendency to rise to the big occasion.

Indeed, Ibrahimovic’s record in big games is considerably more impressive than Lukaku’s. The Belgian has failed to find the net against Arsenal, Chelsea, Tottenham and Liverpool this season, and the issue stretches back to his Everton days. In fact, since 2014/15, he has only hit five goals in 39 meetings against the Premier League’s big six.

Ibrahimovic is also at an advanced stage of his recovery from injury. His omissions against Arsenal and CSKA allowed him to conserve his energy for Sunday’s game, and his previous substitute appearances against Newcastle, Basel, Brighton and Watford have already helped him build up his match fitness.

Ibrahimovic would give United a talisman and a leader in the absence of the suspended Paul Pogba, and he might also be even more motivated than usual against Guardiola. The pair’s fractious relationship at Barcelona is well-documented. Ibrahimovic would surely like nothing more than to get one over on his old manager.