As firefighters continue to battle the Thomas Fire in Southern California, one family is mourning the loss of their own.

A procession was held on Highway 126 in Fillmore on Thursday afternoon to honor Cory David Iverson, a 32-year-old firefighter who lost his life battling the Thomas Fire, the largest of the blazes.
Iverson, who had been a firefighter with the California Department of Forestry and Fire Protection — also known as Cal Fire — since 2009, was a fire apparatus engineer from San Diego, according to a Cal Fire spokeswoman. 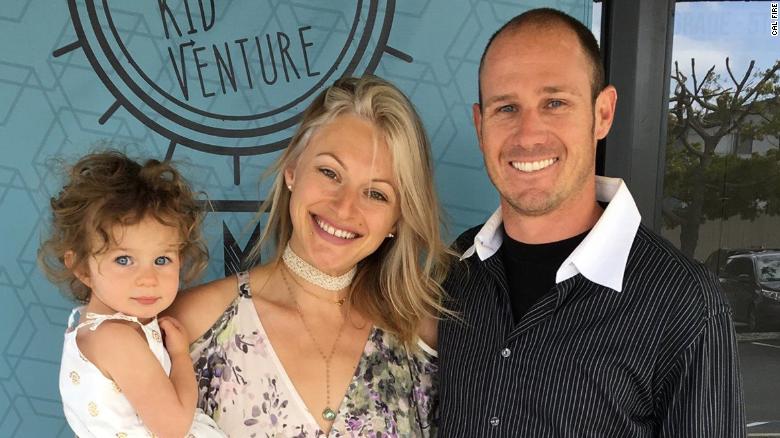 Cal Fire engineer Cory Iverson died while fighting the Thomas Fire in Ventura County. He leaves behind his pregnant wife, Ashley, and toddler daughter Evie.
He drove a fire engine and was killed on the east flank of the Thomas Fire, Lynne Tolmachoff said. Iverson was with a strike team of two or three other crew members when he was killed, she said. He was pronounced dead on the scene.
Iverson leaves behind his wife, a 2-year-old daughter and an unborn baby, expected this spring. His death is the first firefighter fatality in the most recent string of wildfires in California.
Officials are investigating the incident, said Julia Martony, another Cal Fire spokeswoman, and it will take some time to conclude.
The Thomas Fire broke out December 4 in Ojai, northwest of Los Angeles. Aided by Santa Ana winds, it quickly spread to the city of Ventura, according to the federal InciWeb fire information website.
More than 1,000 structures have been damaged or destroyed in the fire, and another 18,000 structures are threatened, Cal Fire said. The cause is under investigation.

CNN’s Cheri Mossburg and Paul Vercammen contributed to this report.