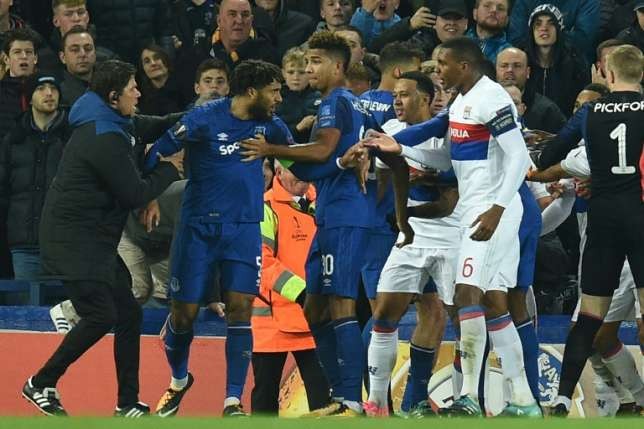 Everton on Friday banned a fan who appeared to try and strike a Lyon player while holding a child during their Europa League tie as UEFA opened disciplinary proceedings following the crowd trouble at Goodison Park.

The ugly scenes on Thursday erupted after Ashley Williams barged into Lyon goalkeeperAnthony Lopes midway through the second half of the 2-1 victory for the French side, sparking a melee.

That skirmish moved to pitch-side advertising hoardings, at which point a man carrying a young boy pushed Lopes in the head before hitting out at him again.

“Club officials have reviewed the footage of an incident that occurred in the 64th minute of the game against Olympique Lyonnais where supporters towards the front of the lower Gwladys Street End became involved in a confrontation between players,” Everton said in a statement.

“We have identified one individual whom action will now be taken against. This will include a ban from attending future Everton fixtures and the club registering a formal complaint with Merseyside Police.”

European football’s governing body UEFA later issued a statement saying it had opened disciplinary proceedings against Everton, charging the club with “aggressions by supporters against players”.

The case will be dealt with by UEFA’s control, ethics and disciplinary body on November 16.

Merseyside Police said they were investigating the incident, adding in a statement: “Detectives will be reviewing footage and speaking to witnesses to establish what, if any, offences have been committed.”

Williams, who was Everton captain, instigated the trouble when he shoved Lopes off the pitch as the goalkeeper went up to make a catch on the byline.

Numerous Lyon players reacted angrily and a fracas broke out involving players from both sides.

Williams, who shortly afterwards equalised for Everton, was booked for his role and appeared fortunate to escape with just a caution as replays showed he raised his hands to Lucas Tousart’s face.

After the game, Toffees manager Ronald Koeman blamed referee Bas Nijhuis for his players losing their cool during a defeat that leaves Everton facing Europa League elimination after just one point from three games.

He said the referee did not take strong enough action against what he termed the “theatre” of the Lyon players.

But speaking to the press on Friday, Koeman, while admiring Williams’s battling qualities, said the player needed to “control himself”.

“By frustration you get maybe more aggression, and that’s not bad — but you need to control yourself,” he said.

“I understand his situation of yesterday, his personal situation. It was difficult after missing out on the World Cup with Wales and he had made some mistakes that cost a goal.

“I like that mentality — he showed his face yesterday, he played well, he was the captain on the pitch. Of course, in the situation of the brawl he needs to control himself.”

The defeat compounded another miserable night for Everton and Koeman, who is under mounting pressure, with his team having won just two of their previous 12 fixtures.