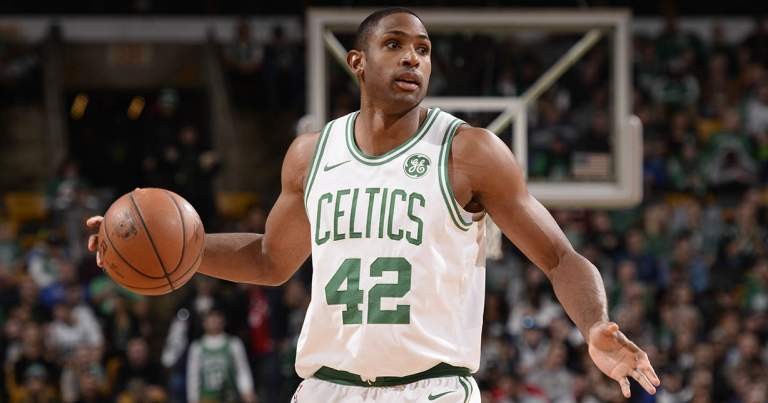 That’s how Celtics point guard Terry Rozier phrased it Sunday evening, after Boston’s big man dropped 21 points on 8-of-9 shooting during a 95-94 win over the Toronto Raptors at TD Garden.

When told of his 23-year-old teammate’s comments, Horford let out a hearty laugh.

“I don’t know if young Al Horford played like this, to be honest,” the four-time All-Star responded. “It’s been years of just working on my game and trying to play this new way [of spacing the floor]. It’s just the style the NBA is shifting toward, and it’s taken me a couple of years to get comfortable and play like this. Young Al Horford couldn’t shoot threes.”

Horford’s newfound, long-distance prowess, however, isn’t what prompted Rozier to make such a flattering remark. What stood out most was the 31-year-old’s offensive aggression in the paint.

Horford, who is averaging 15.2 points per game on 55.7 percent shooting from the field, fearlessly drove to the basket time and time again Sunday afternoon. And, as you can see by the numbers above, he did so at an extremely efficient rate. Six of his eight field-goal makes occurred at the rim, including a number of dunks, layups and post-up shots.

“That’s what we wanted from Al,” said guard Marcus Smart. “He makes his matchups very tough. They don’t know whether to put a regular five on him or a smaller guard. We try to exploit that. He’s a very good offensive player, so we want Al to look more for his [shots]; especially in the post, he has to look for it, and he’s been doing that.”

Such shot selection and efficiency wasn’t initially apparent during Horford’s first few months with the Celtics last season, but his teammates have noticed an increased level of aggression from him dating back to the squad’s 2017 postseason run.

“It definitely looks like a young Al Horford,” 20-year-old wing Jaylen Brown said in agreement with Rozier. “An All-Star Al Horford, to be honest. If he keeps it up, we’re going to be tough.”

What made Horford’s tenacious approach against the Raptors even more impressive was the fact that he was just returning from a concussion. He had missed the previous two games after being knocked in the head by Atlanta’s Kent Bazemore Monday night. But he showed no signs of timidity upon his return, as he attacked the hoop immediately and often against the Raptors.

“I’m not surprised,” coach Brad Stevens said of Horford’s energy out of the gate. “Obviously he missed a couple of days there, and wanted to make sure he was in really good shape before he came back. But he’s done so much for us for so long; nothing that he does on the court surprises me.”

The timing of Horford’s return was particularly important since leading scorer Kyrie Irving was sidelined with a facial fracture. Fortunately, Boston’s star point guard isn’t expected to miss many games, but in the meantime the team needs find a way to make up for his offensive absence.

Horford helped fill the scoring void as well as he could have Sunday afternoon.

“It felt good,” Horford said of his first game back. “I was just happy to be out there with my teammates. It was hard for me to sit on the side and have to watch.”

Horford’s two-game absence was hard on his teammates as well, even though they were able to continue their winning ways without his leadership.

“He brought that spirit back,” said Smart. “Al’s a very good offensive player that can go create for himself and others, and when we needed a bucket, we just ran the plays to him and he created for us.”

Horford has impressed a lot of Boston’s youngsters with his aggression of late, and his contributions have played a big role in the team’s 12-game winning streak.

The Celtics should continue to be a tough team to beat, as long as their eldest veteran keeps “playing young”.