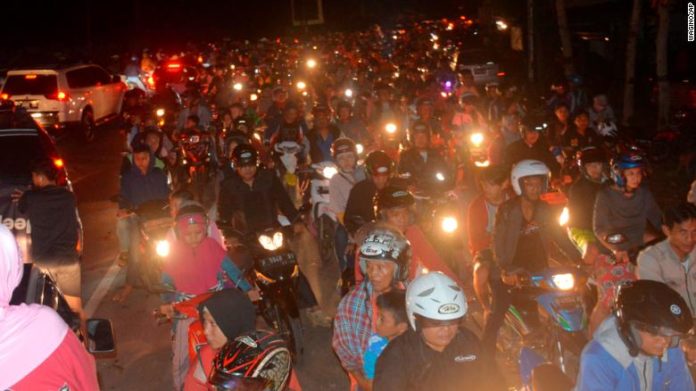 Motorists in Cilacap, Indonesia, are stuck in traffic as they try to reach higher ground amid fears of a tsunami after an earthquake. A tsunami warning was canceled.

Two people were killed and seven others were injured when a strong earthquake hit Indonesia late Friday, authorities said.

The 6.5-magnitude quake was centered in Cipatujah, in the western part of Java, the US Geological Survey said, at a depth of 91.9 kilometers (about 57 miles).
Residents felt the quake about 190 miles away (305 kilometers) in the capital of Jakarta, where people briefly evacuated to the ground floor of their high-rises. 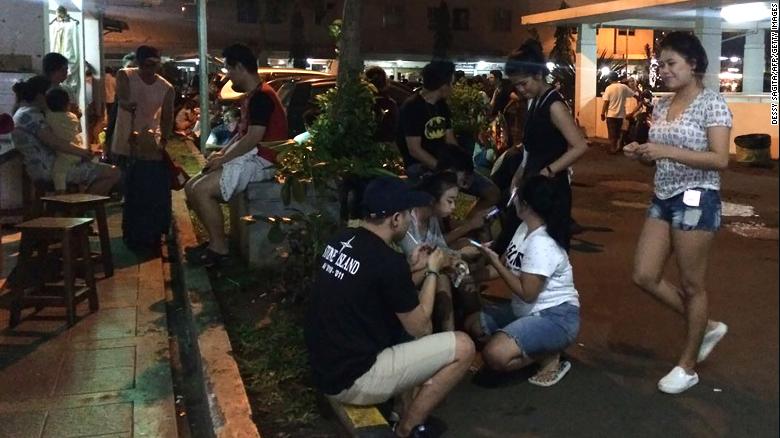 Residents gather outside their apartment blocks in Jakarta after the earthquake.
Tremors were also felt in the cities of Bandung, more than 63.5 miles away (102.1 kilometers) and Yogyakarta, more than 211 miles away (339.9 kilometers), authorities said.
A tsunami alert was issued after the quake, which Indonesian authorities recorded at 11:47 p.m. as 6.9 magnitude, according to Sutopo Purwo Nugroho, spokesman for Indonesia’s National Disaster Management and Mitigation Agency
The two victims were buried in rubble, one in Ciamis, in West Java, and the other in Pekalongan, in Central Java, emergency officials said.
ADVERTISING
inRead invented by Teads
A few hundred homes and buildings were destroyed or damaged, the officials said. Several hospitals were damaged. Seventy patients from Banyumas Hospital were moved to tents and another temporary shelter. 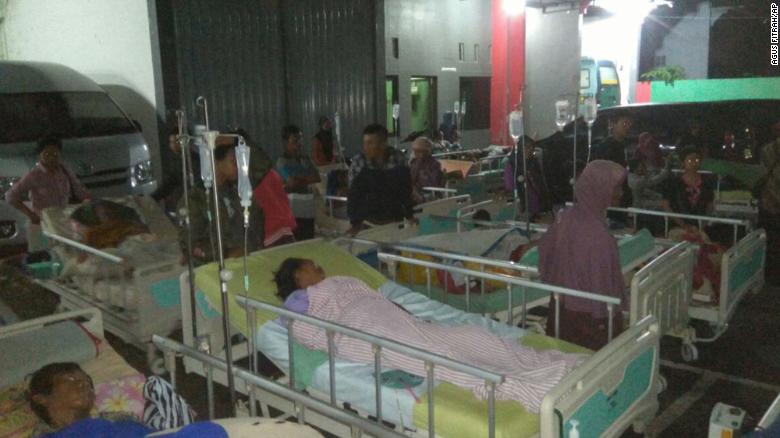 Patients are evacuated outside a hospital in Banyumas overnight after an earthquake.
Fears of a tsunami prompted people to evacuate their homes for higher ground, but there were no reports of tsunamis occurring along the southern coasts of western, central and eastern Java and the city of Yogyakarta.
The alert was lifted at 2:30 a.m., the spokesman said.
Most residents returned to their homes on Saturday and they were advised to seek temporary shelter if their dwellings aren’t safe. Several aftershocks continue to be felt in the areas hit by the quake, emergency officials said.
An earthquake on December 7, 2016, struck Indonesia’s Aceh province in Sumatra and killed at least 100 people.
Egypt hunts for killers after mosque attack leaves at least 235 dead
Melanin Popping! Nigerian model Mary Timms slays In swimsuit photoshot
Dear Uriel, I love your ‘booby’ – Ruggedman
Olamide Dear conflicted fan, it’s okay not to like “Lagos Nawa” album
Ladies spark outrage after dressing up as nuns in bikinis (photos)
Powerful Iran-Iraq earthquake is deadliest of 2017
In Australia Lost diver swam miles to shore stalked by shark A diver separated from his boat off the coast of Australia said Sunday he was lucky to be alive after being forced to swim miles back to shore — shadowed by a large tiger shark.
How to lead Nigerians out of poverty, by Tinubu
Big Black Woman poses in skimpy lingerie for her 35th birthday and social media users go hard on her
Goodluck Jonathan I’m always close to tears when Nigerians say they want me back – ex-President
In Vietnam Death toll from typhoon rises to 61 The death toll from typhoon downpours and floods wreaking havoc along Vietnam’s south-central coast has risen to 61, an official said Tuesday, as the country opens its doors to world leaders for this week’s APEC summit.
Why Trump is still winning
Tizeti partners Facebook to bring Nigerians affordable internet service The Express Wi-fi plans are affordable and range from N50 for 100MB to N2,000 for 10GB.
Iraq is ‘fully liberated’ from ISIS, its military says
Why Nigerians are willing to die to get to italy
Bianca is Responsible for My Father’s Death – Emeka Ojukwu Jnr Speaks Out in Explosive Interview
After IS, Libya yearns for normality
Babatunde Fashola ‘We’re re-introducing toll gates across the country,’ Minister says