After IS, Libya yearns for normality 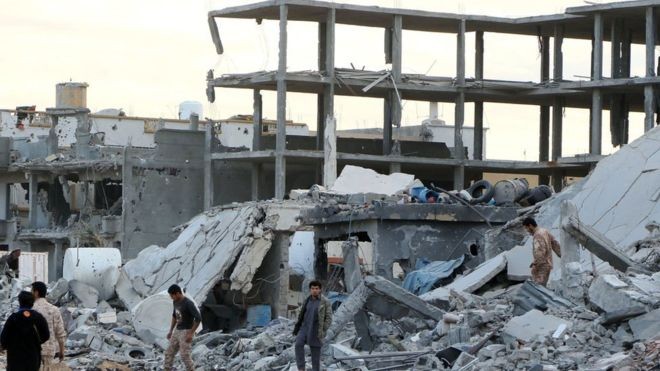 After IS, Libya yearns for normality

One year on from a military campaign that successfully expelled so-called Islamic State (IS) from its Libyan stronghold of Sirte, residents have complained of the scale of destruction that remains.

Months of fighting left scenes of devastation similar to those seen recently in the Syria city of Raqqa, where IS was pushed out in October.

The IS reign in Sirte was known for its brutality. But the euphoria and celebration in the wake of the military offensive that succeeded in ousting the jihadists in December 2016 have dissipated into frustration and a yearning for life to return to normal.

Towards the end of 2017, residents from areas of Sirte that were hardest hit by the fighting staged protests against the lack of reconstruction efforts.

They blamed both of Libya’s rival authorities – the eastern-based parliament and the UN-backed Tripoli Government of National Accord (GNA) – for the situation in the city, though Sirte falls under the authority of the GNA.

Some 1,600 homes were destroyed in the bid to push IS out, Libyan media have said.

Demonstrators, including children, held up posters in front of battered buildings. “Dear government, why have you ignored our city?!” read one. “Reconstruction first,” said another.

Struggle for a normal life

“I can’t speak for the protesters, but most Sirte residents just want life to return to normal as quickly as possible,” one local, Abdullah, told the BBC.

He preferred to be identified only by his first name, “because IS continues to pose a threat to us”.

“Sirte’s residents lived for many months under IS’s oppressive rule. We all suffered huge losses. IS killed our relatives and our friends, and left destruction in our city,” said Abdullah, who helps run a local Facebook page.

“After all this fear, we need a long time for our wounds to heal and to rebuild our city.”

Under IS’s brutal rule, people had posted images on social media and shared fond memories of life before the jihadists controlled Sirte.

The reconstruction of Sirte is one of a myriad of challenges faced by Libya. With the UN-backed unity government in Tripoli still struggling to impose its authority and too many factions determined to torpedo the entire UN-mediated dialogue process, the prospects of Sirte receiving the attention it needs anytime soon are slim.

Libya’s second city Benghazi has also been devastated by fighting and it too faces the enormous task of rebuilding and reconciliation. As long as Libya’s power struggles continue, its citizens will bear the brunt.

Life has become desperate for many. Some find it so unbearable that they have started taking the smugglers’ boats to Europe. At least 600 Libyans have made that journey this year.

A serious challenge to Sirte’s recovery is that the threat of IS still looms large.

The group appears to be trying to regroup and attack Sirte from nearby locations.

Losing the city was a major blow to the group’s propaganda efforts to portray it as a foothold on the doorstop of Europe.

Though it is unlikely to retake territory, IS has continued to wage sporadic attacks. In October it released an upbeat video of its fighters in Libya, saying that the group was making a comeback.

“Many people who fled the city have returned now. But we are still worried that the IS terrorists will return. For that we need help and support, so we can guarantee IS isn’t able to come back, and to ensure a safe life for us and our families,” Abdullah told us.

One obstacle to reconstruction is the seemingly irreparable political crisis.

Rounds of negotiations sponsored by the UN and Libya’s neighbours have so far failed to heal the political rift between its rival authorities. The operations to recapture the city were led by militias sympathetic to the GNA, and supported by US air strikes.

The GNA has not responded to a BBC request for comment. But in November, GNA Prime Minister Fayez Sarraj instructed the authorities to urgently resolve the dire living conditions.

“The government has a vision for Sirte to be one of the main cities prioritised for reconstruction as soon as the financial situation has improved,” his media office said.

From Sirte, Abdullah told us progress could be achieved, but only through unity.

“We are sure that we can get back to normal – it is our duty. The best way to eliminate the danger of IS is to work together in the spirit of partnership. Every day we see volunteer initiatives by the young men and women of Sirte to contribute to reconstruction. We must all encourage them,” he said.

Haniya, from the local council, echoed his words: “The city needs everyone to rally around it, locally and internationally.”

Migrant crisis: ‘I was sold three times by slave traders’
Prominent Imam says he tried to warn New York mayor about terrorism in the city but was ignored
Getting Nigeria’s railways back on track with China’s help
‘No Nigerian representative at the burial of the 26 young Nigerian ladies that drowned in the Mediterrenean sea’ AFP journalist, Trisha Thomas reveals
239 Nigerian Migrants return from Libya amidst slave trade crisis
Prince Harry: Stars were aligned when I met Meghan
Madrid left back Marcelo in £437,000 tax charge
Singer, Ruby Gyang celebrates her birthday with stunning new photos, writes open letters to her younger self, her daughter and her current self
US president jumps over China’s ‘Great Firewall’ with first tweet
Libya Slavery: Osinbajo meets NEMA, NAPTIP, National Commission For Refugees
Nigeria’s love affair with a Norwegian fish
Manchester City manager Pep Guardiola said his side “competed amazingly” as they fought back from 1-0 down to win at Huddersfield.
Migrant crisis: Boat sinks off Libya, killing at least 31
Ivanka Trump US President’s daughter urges India to boost women in workplace
‘Abacha loot’: Switzerland to return $320m to Nigeria
Praljak: Bosnian Croat war criminal dies after taking poison in court
Mercy Johnson Watch actress as she sings to her husband in bed
US to stop arming anti-IS Syrian Kurdish YPG militia – Turkey