Tizeti partners Facebook to bring Nigerians affordable internet service The Express Wi-fi plans are affordable and range from N50 for 100MB to N2,000 for 10GB. 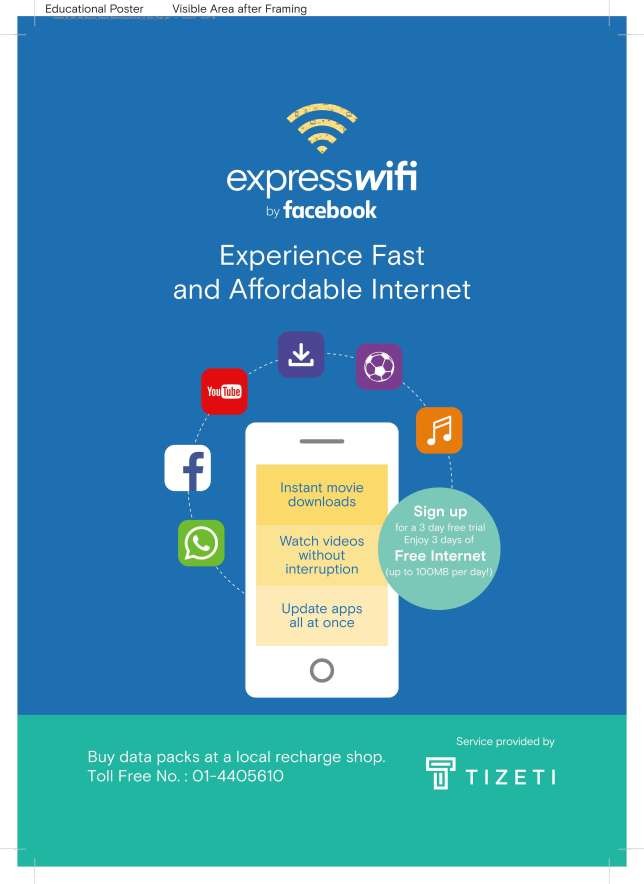 Tizeti today, November 8, announced a partnership to expand Express Wi-Fi by Facebook in Nigeria, with plans to roll out hundreds of hotspots over the coming months.

Facebook in 2016 launched the service in partnership with Nigerian ISP Coollink, starting with Lagos.

Tizeti’s intentions are to expand the reach of this cheap internet access across Nigeria, and partnering with Facebook to achieve this.

Announced at AfricaCom 2017, this initiative supports Facebook’s and Tizeti’s shared goal of connecting more people to the internet in a cost-efficient way.

A fast and affordable public Wi-Fi hotspot service, Express Wi-Fi in Nigeria is focused in areas where people gather and work, including markets, cafes and public outdoor spaces.

Using affordable internet through Tizeti’s Wi-Fi technology, anyone with a Wi-Fi capable device and the ability to receive a one-time SMS will be able to use Express Wi-Fi without switching SIM cards or having a data plan. People can connect through Express Wi-Fi on most Android and iOS phones, tablets, and laptops.

Commenting on the announcement, Kendall Ananyi, CEO of Tizeti, said: “We look forward to launching this partnership with Express Wi-Fi which allows us to continue our mission to bring affordable and reliable internet to more Nigerians.”

“We’re excited to partner with Tizeti to expand access in Nigeria and roll out hotspots in the coming months.”

From Left to Right: Osinbajo, Buhari and Zuckerberg sharing a moment.

Facebook’s Mark Zuckerberg visited Nigeria earlier in 2017, which indicated his belief in the talent Nigerians possess and the role they have to play with regards to changing the world.

In addition, anyone connected to an Express Wi-Fi hotspot can access Facebook Flex and Free Basics, which offers people access to impactful local services, including health resources, education, business tools and more.

Why Nigerians are willing to die to get to italy