How to lead Nigerians out of poverty, by Tinubu 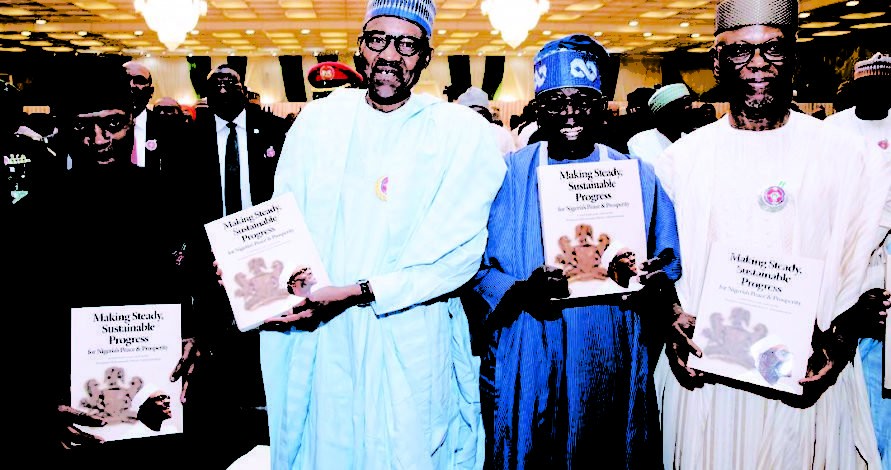 He reviewed the three-point focus of the administration – the anti-graft battle, security and re-ordering the economy – saying in spite of strident criticisms, the government had done well to make the country more prosperous now than it was two years ago.

But he gave his perspective on how things could be better done.

Tinubu spoke during the public presentation of a book “Making steady, sustainable progress for Nigeria’s peace and prosperity” at the old Banquet Hall of the State House in Abuja he was the special guest of honour  at the event.

The book was reviewed by APC chieftain and eminent journalist Prince Tony Momoh.

President Buhari said those who steal will be made to face the law. He promised to bring back the remaining Chibok girls and  rededicate himself to working for all Nigerians after their prayer ensured his full recovery from illness that took him abroad for more than 100 days.

He said: “Here, permit me to offer a few observations on how we might proceed. There will be those who might distort what I say here as evidence of ‘space’ between President Buhari and me. Their evidence will be false and their news about this will be fake. Mischief never dies. Fortunately, nor does the truth.

“What I proffer today is done in the spirit of utmost respect and affinity by one who wants the best for this government and for Nigeria. I say these things to encourage the government to achieve the greatness the times demand and of which this government is capable.

“The battlefront upon which this nation’s fate shall be decided is the economy. On this, almost all else shall hang. In addition to talking about this book which describes our immediate past and present, I want to briefly mention another document:  The 2018 budget.

“This budget moves us farther in the right direction. It is a bolder, more creative one than this government’s earlier editions.

“It shows this government has embraced its progressive identity despite the chorus of opposition.  Also that it more clearly realises the depths of the economic and financial challenges before us.

“One of the important aspects of this budget is the capital expenditure for needed infrastructure. This investment means the government fully recognises our economy must grow but that it cannot expand beyond the parameters of the infrastructural grid that serves it.

“With this book and with the budget we come to the place where past intersects with the present to interact with the future. The place where what we do or don’t do will dictate the Nigeria of tomorrow.

”We are inching out of recession but growth must increase. It is time to lead our people to a place where poverty and hunger become infrequent and where prosperity and hope are the daily fare of the common man,” he said

The former Lagos State Governor added: “There are three key ideas I would like to table before you today. First, we are among the world’s most populous nations and potentially one of its most powerful. No populous nation has ever attained prosperity without first establishing a robust industrial capacity.

“In one form or another, England, America, Japan and China implemented policies to protect key industries, promote employment and encourage exports.

“These nations represent the past, present and immediate future of national economic achievement.

“If Nigeria is to be a leader in the next phase of global economic history, we must learn from these prior successes. The common thread between these nations was the objective of buffering strategic industries in ways that allow for the expansion and growth of the overall economy.”

On true federalism, Tinubu said: “We also must move toward true federalism by the balance of power and responsibility between the Federal Government and the states. In so doing, we attain the correct balance between our collective purpose on one hand and our separate grassroots realities on the other.”

According to him, the administration of former President Goodluck Jonathan won a gold medal in corruption.

He said so much money grew feet and ran faster than Jamaican runner, Usani Bolt, under Jonathan’s administration.

The money that should have been spent on development, Tinubu noted, was squandered in ways that could cause the devil to blush.

He noted that gone were the times when a minister could pilfer billions of dollars as easy as plucking a piece of candy from the table.

Tinubu said: “The prior government used the public treasury as a private hedge fund or a charity that limited its giving only to themselves. So much money grew feet and ran away faster than Usain Bolt ever could. That which could have been spent on national development was squandered in ways that would cause the devil to blush.

”One minister and her rogues’ gallery picked the pocket of this nation for billions of dollars. While poor at governance, these people could give a master thief lessons in the sleight of hand.  In governance, they earned a red card but in corruption, they won the gold medal.

“President Buhari has set an axe to the root of this dangerous tree.  I would be lying if I said the war against large-scale corruption has been won.

”It has not.  It will take time and countless swings of the axe to fall such a deeply-rooted tree. But try we must. This is what the President is doing.

”We have much to do to combat this disease.  Not only must we track down the takers. In the long term, we must review the salaries of public servants and create universal credits for our people to reduce temptation.

”We must also take greater care by placing people of character, competence and goodness into key positions. When they fail, they must be removed without remorse or favour.

”Through no fault of its own, this administration had to grapple with a rapid fall in oil prices. That fall brought recession and collapsed our exchange rate regime. More fundamentally, it showed that the very economic model upon which this nation operated was outmoded and flawed. Unfortunately, the past administration did nothing to re-calibrate the economy.

”With fewer resources at hand, this government is compelled to do more. It must respond to immediate needs in a way that leads to long-term economic reform.

Tinubu insisted that President Buhari is truly the right man to lead the country at this time.

He said: “We are many things as a people. Among them is that we can be a clamorous nation. Noise abounds. Voices rise. Critics moan. The angry and the desperate even question whether this nation should exist, whether it is an experience or experiment that has failed.

”Mr. President, the noise can be loud, almost deafening at times. Yet, ultimately, both noise and clamour shall fade, for progress.

”Before this government came into being, Boko Haram wreaked havoc on a daily basis. Spreading its evil arm across great expanses of our national territory, Boko Haram invaded towns and villages, erasing the peace and normalcy of the people to replace it with wanton brutality, hatred and death.

”They hoisted their dreadful flag where only the green and white of Nigeria should have been.

”Today, that evil flag is not planted over an inch of our precious land. This violent scourge recedes into the darkened shadows of inhumanity from whence it came. People once under its horrid dominion now breathe the air of freedom and safety.

”Boko Haram has not been completely defeated. But there is no question, that it has been decimated and made shorter and weaker. They shall never constitute the threat they once were.

”This is no accident. It is the result of the policies and commitment of President Buhari, his government and the men and women of our armed forces who place their lives on the line in silent heroism to protect this nation and its people.

”Had the previous government remained in place, Boko Haram would have surely eaten more territory and devoured more people. This nation might have indeed been divided and cut asunder, not by choice but by the knife of terrorism,” he added

President Buhari said: “During the year it was my great pleasure to secure the release of 102 Chibok school girls. We are doing our best quietly and effectively as possible to get the rest released.

”We are working day and night with our international partners to release the remaining girls as soon as possible, women and children.

”We are all aware now that if you steal public funds and you are caught, you will face the law.

”Internationally, Nigeria is now a respected nation. I can’t keep up with invitations to visit other countries much less for other countries’ leaders that want to visit us. A number of world leaders are expressing the desire to visit nigeria virtually monthly.

”Our creditworthiness is sound; our first Eurobond offer was oversubscribed four times.” he stated

Thanking Nigerians for their prayers, he said: “I can only repay you by resolving to work by putting every ounce of my energy to protect your interest.

”We have gone through our difficult times due to worldwide economic recession . We are coming out of recession and government efforts are targeted at easing economic hardship.

“I would at the same time like to assure all Nigerians of my commitment to improve security, fight corruption and restructure the economy.

“On the herdsmen/farmers clashes, kidnapping and armed robberies within the confines of our limited resources, we are giving top priority to security.”

Noting that Nigeria’s major problem is corruption, Vice President Yemi Osinbajo said the government had been investing in the various sectors of the economy in the past two years.

Minister of Information Lai Mohammed listed the achievements of the government in the last two years. The SGF said Nigeria had undergone considerable improvement since the coming of the Buhari administration.

He said that the publication was not just a book but a guide of the Presidents campaign promises.

According to him, the book is an outcome of public private partnership. It is to be distributed free of charge.