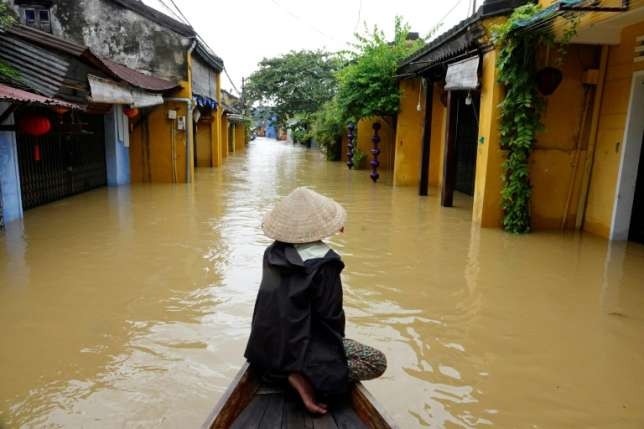 The death toll from typhoon downpours and floods wreaking havoc along Vietnam’s south-central coast has risen to 61, an official said Tuesday, as the country opens its doors to world leaders for this week’s APEC summit.

Typhoon Damrey struck just before Vietnam was set to host the Asia-Pacific Economic Cooperation (APEC) meetings in Danang, which will bring together US President Donald Trump, China’s Xi Jinping and Russia’s Vladimir Putin, among other leaders.

While Danang itself was spared the worst damage, muddy flood waters have submerged the hardest-hit provinces and swamped nearby Hoi An, a UNESCO World Heritage Site that was set to host APEC spouses later this week.

On Tuesday an official from Vietnam’s search and rescue committee told AFP the death toll had reached 61, with victims perishing in floods, landslides and capsized boats at sea.

“We are looking for more than 20 others,” the official added.

Authorities said rivers were raging as reservoirs filled up to near capacity in central and southern provinces, with rain still pelting some areas.

Typhoon Damrey, which made landfall on Saturday, is the latest in a string of major storms to thrash Vietnam’s long coastline this year.

The country has reported at least 240 people dead or missing in floods and landslides since the beginning of the year.

Share
Facebook
Twitter
WhatsApp
Pinterest
Linkedin
ReddIt
Email
Print
Tumblr
Telegram
Mix
VK
Digg
LINE
Viber
Naver
Previous articleTrump On a divided peninsula, South Koreans split over US President On the divided Korean peninsula, Seoul has seen protests both for and against President Donald Trump, with Southerners split over his aggressive handling of Pyongyang’s provocations.
Next articleTrump Jr US President’s son hinted at review of Russia sanctions act, says lawyer A Russian lawyer has said Donald Trump Jr suggested in a meeting during the US presidential campaign that a law imposing sanctions on Russia could be reviewed if his father were elected.