Why Nigerians are willing to die to get to italy 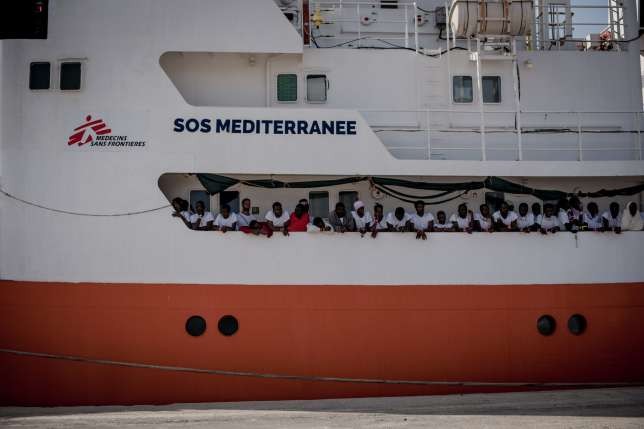 The bodies of 26 Nigerian girls and women were found on a boat that attempted to cross the  Mediterranean sea to Europe.

The Italian authorities suspect that the women were sexually abused and murdered. This news might be shocking to many people but it is a regular occurrence.

Thousands of Nigerians die annually as they try to enter Europe by crossing the Mediterranean sea and passing the Sahara desert.  Just a few people who go on this dangerous journey are lucky to talk about it.

One of the bodies of Nigerian women

In May 2017, several Nigerians and Ghanaians died of thirst in the Sahara desert. One of the few go survived was a 22-year-old Nigerian woman Adaora.

“We were in the desert for 10 days. After five days, the driver abandoned us. He left with all of our belongings, saying he was going to pick us up in a couple of hours, but he never did” she recalled as reported by Vanguard.

“We had to drink our own pee to survive”  she further said. Adaora and two of her friends went on this journey. Sadly her two friends died along the way.

Adaora who survived 10 days in the Sahara Desert

“They were too weak to keep going,” she said. “We buried a few, but there were just too many to bury and we didn’t have the strength to do it. I couldn’t walk anymore. I wanted to give up.“

This is the fate of many Nigerians. If they don’t end up dead in the desert, they would most likely drown in the sea.

Nigerians are dying in frightening numbers. Only a fraction of them make it to Italy, 36,000 Nigerians made it to Italy illegally in 2016. Think of those who didn’t make it. Many of them are abandoned, murdered and rape along the way.

What is making these people leave Nigeria to Italy via the most dangerous route?

It’s a case of desperation. Many of the people who pass the Sahara route have little or no economic opportunities. For them, it is better to face the unknown overseas than deal with the certainty of unemployment and hardship here.

“As Nigeria’s economy has grown—spurred by oil extraction, agriculture, and foreign investment—so has the percentage of its citizens who live in total poverty,” wrote Ben Taub is in his article for the New Yorker “The Desperate Journey of a Trafficked Girl“.

At the centre of his story is Blessing who leaves Nigeria via several treacherous trafficking routes. The article paints a vivid tale of what it is like to travel from Nigeria via road to Europe.

Two Nigerians, Blessing and a companion in Italy who were smuggled into the country

Blessing is just one of the many Nigerian young women who have given up on Nigeria and is willing to go through hell to get to Europe.

The economic situation is why many Benin women in the 80s and 90s sought for greener pastures overseas. It is the reason why many Nigerian families relocated to the United Kingdom and America legally.

For those who can’t afford flight tickets and passports, the best alternative was to pass the dangerous trafficking routes.

The return of democracy has done little to stop this illegal and dangerous exodus. Nigeria’s economy might be improving based on reports and numbers but the truth is that the life of the average man has hardly gotten better. Corruption has held back the dividends of democracy to those who need it most.

The  26 Nigerian girls and women who died on the journey to Europe just wanted a better life for themselves because they felt there was nothing from them here.

10 things Nigerian women don’t know about Nigerian men There are a lot of things for women to figure out in men, here are ten of them