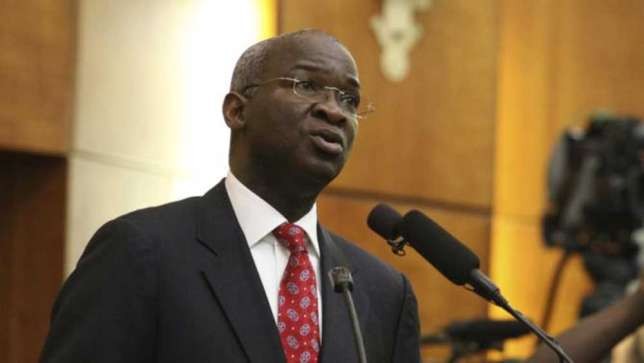 Fashola said 38 points have been identified in the first phase of the re-introduction of toll gates.

The Federal Government has said that toll gates will be re-introduced on major highways across the country.

The Minister of Power, Works and Housing, Mr. Babatunde Fashola (SAN), disclosed this on Thursday, November 23, while appearing before the Senate Committee on Federal Roads Maintenance Agency.

He said 38 points have been identified in the first phase of the re-introduction.

“Clearly, tolling is coming,” the minister told the lawmakers.

According to him, the new toll gates will be situated at the old spots, adding that tolls will be collected after the roads have been made motorable.

He said, “We are not going to ask road users to pay toll on a road that is not good. While the construction (of gates) is going on, we are working on the design. We want to standardise the design so that people when we ask people to come and bid for the construction, we can control what they are going to construct. They are going to construct the materials we have prescribed. We can also control the price so that nobody is bidding with disparage prices; there will be the floor and the ceiling. Your price will vary according to how many plazas you build and not because you claim to have used ‘foreign’ materials.

“The last part we are working on is the software that drives the management, audit, and payment of toll fares. We want to use the development that has taken place between when the old toll plazas were dismantled and now. There were no GSM and payment platforms as of that time as we have cellphones and cards now. We want to make it very easy for people to go to kiosks and buy toll cards and pay tolls.”

The stand of the lawmakers on the return of toll gates is unclear at the time of filing this report.

Olamide Dear conflicted fan, it’s okay not to like “Lagos Nawa” album
LIB Exclusive: Nigerians threaten to protest against Lekki concession company’s plan to increase toll gate fare from Nov 8
Photos: Two-year-old Nigerian boy, four others drown in the Mediterranean Sea due to reckless behavior of Libyan Coast Guards
Hope for noma disease victims left without faces
How to lead Nigerians out of poverty, by Tinubu
Torrential rain who killed five people dead Four of the fatalities were young miners working in a pit that filled with water and the fifth a teenage girl who fell off a ravine.
Ladies spark outrage after dressing up as nuns in bikinis (photos)
‘My government will improve aviation infrastructure’ – President Buhari
Trump-Russia Indictments, guilty plea in probe: What we know Two former Donald Trump associates were indicted Monday and it was revealed another has pleaded guilty to lying to FBI investigators, in the first substantial legal action stemming from the probe into Russia’s US election interference.
US President stepped up praise for Xi ahead of China visit
At least 20 people shot as gunman opens fires during church service n Texas
Amazon is now the size of a small country
Goodluck Jonathan I’m always close to tears when Nigerians say they want me back – ex-President
Grace Mugabe The lavish former 1st lady of Zimbabwe who built a palace for herself
In Canada Improved economic outlook cuts budget deficit A surging Canadian economy has reduced the government’s budget deficit this year by billions of dollars, the finance minister said Tuesday.
In Kenya Second protester shot dead after fractious vote A second protester was killed in Kenya on Friday as anger raged a day after a divisive election boycotted by the opposition, taking the death toll from two days of protests to eight.