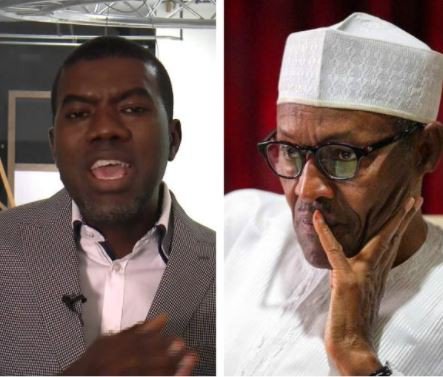 Reno Omokri, a former aide to ex president Goodluck Jonathan has reacted to recent claims by the presidency that 756 people were killed in 2-years under his adminitration.

In his response, Reno said Jonathan dealt with the fulani herdsmen decisively.

Former President Jonathan wishes to express his condolences to the government and people of Benue, Kaduna, Taraba, Adamawa and Nasarawa states, over the recent spate of killings occasioned by herdsmen/farmers clashes. His heart bleeds for the sufferings of Nigerians and he calls on the authorities to do everything in their power to put an end to these needless killings.

Having said that, let it be known that we find the statement by the Presidency stating that 756 Nigerians were killed by Fulani herdsmen in two years under the government of former President Jonathan as a mischievous assertion by a callous Presidential spokesman who thinks that death is something to be trivialized. For the avoidance of doubt, let it be known that the figure of 756 is wrong. But the issue is not that it is a false figure, the issue is that former President Jonathan was not inactive in the face of Fulani herdsmen killings during his Presidency.

While in office, the former President knew that the capacity of the Nigerian police would be challenged by the sophistication of arms available to the herdsmen and so after he was elected President and sworn in on May 29, 2011, former President Jonathan summoned a National Security Council meeting and ordered that Fulani herdsmen attack must be decisively dealt with. In July 2012, the Plateau state government reported that herdsmen killings had reached a head in Barkin Ladi Local Government Area leading to tens of deaths of Nigerian citizens by Fulani herdsmen, many of whom were not even Nigerian citizens.

Then President Jonathan, when briefed about the situation insisted that there would not be such impunity under his leadership and immediately ordered the army and the Air Force to go to the affected communities and fish out the perpetrators and bring them to book. The military immediately obeyed the then President’s orders and sent troops and helicopters to Barkin Ladi Local Government Area. They ordered all residents to leave their residence for temporary accommodation provided for them so they could conduct a joint air and ground operation to flush out the armed herdsmen who had been suspected of killing innocent Nigerians. The residents complied and the soldiers went in and not only did they clear the area, they made arrests which led to trials and convictions. We wish to remind Nigerians that when this episode was being carried out, it was precisely members of the opposition who later became the All Progressive Congress that heavily criticized then President Jonathan’s orders.

In fact, a prominent member of the APC and now the Governor of Kaduna State and a known confidante of the President, Malam Nasir El-Rufai tweeted his now infamous tweet on the 15th of July 2012 threatening that “We will write this for all to read. Anyone, soldier or not that kills the Fulani takes a loan repayable one day no matter how long it takes.” (his exact words). So the question Nigerians need to ask instead of allowing themselves to be distracted by the statement from the Presidency is this: Are Nigerians now repaying the ‘loan’ that El-Rufai threatened to make Nigeria repay? If the then President was not active in decisively sending the military after herdsmen, why would El-Rufai have been so pained to have made such a statement?

Let it be known that the former President views herdsmen who kill unprovoked and with the intention of advancing their own economic and other interests as terrorists, pure and simple. Not only did he treat them as terrorists, he also put the military on high alert to protect Nigerian lives. In conclusion, we state that any group who kills to advance their agenda is a terror group and failure to address them as such is a disservice to the Nigerian people