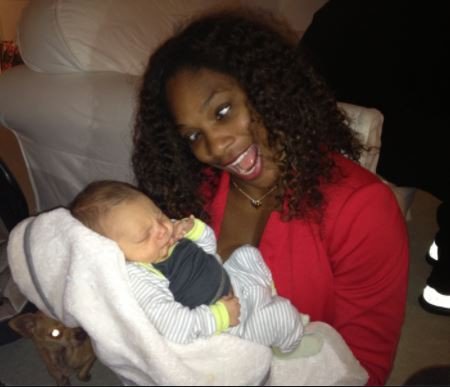 ‘I don’t want my daughter to play tennis’ – Serena Williams

Serena Williams in an interview with Vogue Magazine said she doesn’t want her baby daughter Alexis Olympia Ohanian, Jr. to play tennis when she grows up.

Williams and Olympia appear on the February cover of Vogue together and Williams revealed how she has no intentions of grooming her daughter to follow in her footsteps on the tennis court.

“I would hate her to have to deal with comparisons or expectations. It’s so much work, and I’ve given up so much. I don’t regret it, but it’s like Sliding Doors: Go through a different door and lead a different life. I’d like her to have a normal life. I didn’t have that” she said.

She went on to say, “I think sometimes women limit themselves. I’m not sure why we think that way, but I know that we’re sometimes taught to not dream as big as men, not to believe we can be a president or a CEO, when in the same household, a male child is told he can be anything he wants. I’m so glad I had a daughter. I want to teach her that there are no limits.”

Lol. T.I embarrasses his daughter on Instagram for sharing a sexy photo
’20 things you shouldn’t do in 2018′ – By Debola Williams
Singer, Ruby Gyang celebrates her birthday with stunning new photos, writes open letters to her younger self, her daughter and her current self
Photos from the wedding of Oluwatosin, daughter of Nigeria’s Senate President, Bukola Saraki
Wizkid vs Davido 5 things you need to properly enjoy the beef between Starboy and OBO
Music star reportedly in a secret relationship with Bella Hadid
Idris Elba celebrates his cute daughter as she turns 16
“You are better with your hair covered” – Man advises Kano Governor’s daughter Fatima Ganduje
Photo: Did Nigerian transgender Miss Sahhara get bigger breast implants?
3 people who died but came back to life
Harry Kane to miss Old Trafford Clash
After IS, Libya yearns for normality
Quadri commands respect among top players – Adomeit
13-years old girl narrates how uncles took turns to rape her
ARAMIDE: Why I admire Alicia Keys
Chris Oyakhilome daughter &amp; boo are engaged!
My romance with Jeff Akoh was for publicity, Bisola confesses