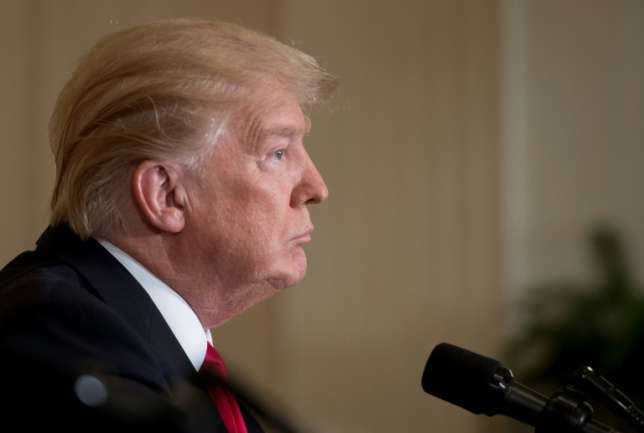 Trump said on Wednesday that the United States could “conceivably” return to the Paris climate accord, although he stopped short of signaling any move in that direction.

President Donald Trump said on Wednesday that the United States could “conceivably” return to the Paris climate accord, although he stopped short of signaling any move in that direction.

“So we can conceivably go back in,” added the president, who announced his intention to pull out of the 2015 accord on curbing global warming emissions last June.

The process of leaving is long and complex, and Trump’s comments will renew questions about whether he actually intends to withdraw or simply wants easier US emissions targets.

A full US pullout could jeopardize global efforts to limit average warming to under two degrees Celsius (3.6 degrees Fahrenheit) over pre-Industrial Revolution levels.

Standing alongside Norwegian Prime Minister Erna Solberg, Trump presented himself as a champion of environmentalism.

“I feel very strongly about the environment,” he said. We “want to have clean water, clean air, but we also want businesses that can compete.”

“One of the great assets of Norway is a thing called water,” Trump said. “They have tremendous hydro power, tremendous. In fact most of your energy or your electricity is produced by hydro. I wish we would do some of that.”

The US president has at times seemed torn between advisors like his daughter Ivanka, who advocate for policies that mitigate the effects of climate change, and aides who believe international accords hold America back.

In the year since coming to office, Trump’s administration has worked to ease environmental legislation, which industry considers a burden on growth.

“The Paris Accord really would have taken away our competitive edge. And we are not going to let that happen,” he said.

Ivanka Trump never expected the savage response she got when she tweeted at Prince Harry and Meghan Markle
George Clooney gifted 14 of his closest friends $1 million each
The White House’s famous magnolia tree to be cut back
Tunde Bakare ‘I’m running for president,’ Preacher declares
Israel plans a Trump rail station as Trump-naming frenzy sweeps country
Iran protests: Russia berates US for UN talks on ‘internal affair’
Fire and Fury: Trump says book is ‘fiction’ and author a ‘fraud’
Lol..See the frightful statue of former Chelsea star Micheal Essien that was unveiled in Ghana (Photos)
10 questions that could keep you up at night in 2018
’20 things you shouldn’t do in 2018′ – By Debola Williams
Trump on Oprah: I’d beat her in 2020
Sydney man charged with being ‘economic agent’ for North Korea
Atiku, Reno Omokri, Ben Bruce, reach out to President Buhari, wish his son, Yusuf, a speedy recovery
‘They’re liars!’ Michael Wolff blasts Trump for calling his book ‘fake’
A reporter who met with the former spy behind the Trump-Russia dossier explains why it’s not ‘fake news’
US stands alone, defiant at UN Security Council over Jerusalem
US tax bill: Republicans agree sweeping changes
Buhari 7 things we learnt from president’s New Year address
White House Aide Omarosa resigns from the White House, to depart in January

Fr. Mbaka and the Voice of God by Reuben Abati