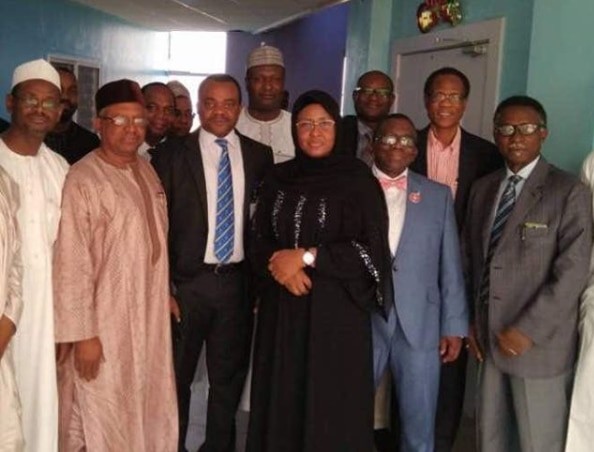 Mrs Buhari also acknowledged the effort of a certain nurse, who has been by the side of the handsome son of the first family.

In an Instagram post, the first lady took her time to thank the medical team responsible for keeping her son alive after his motorbike accident few days to January 1, 2018.

Mrs Buhari also acknowledged the effort of a certain nurse, who has been by the side of the handsome son of the first family.

The hardworking nurse was identified by the first lady as Nurse Eze Doris Eberechukwu of Nisa Premier.

According to the wife of the president of Nigeria, Nurse Doris worked tirelessly to ensure that Yusuf remains stable on his hospital bed.

On Tuesday, January 2, 2018, the Guild of Medical Directors in Nigeria expressed their relief at the stable condition of President Muhammadu Buhari’s son, Yusuf, as he recovers from injuries sustained in a motorbike accident in Abuja on Tuesday, December 26, 2017.

The guild in a statement further said “While we cannot comment on the exact circumstances of the accident, we are happy that the situation is being efficiently handled by Cedarcrest Hospital in Abuja, one of the top Guild of Medical Directors owned hospitals in Nigeria.

The president’s son reportedly crashed his power bike while racing with a friend in the capital city and was promptly rushed to Cedarcrest for medical attention.

In a press statement signed by the president’s Senior Special Assistant on Media and Publicity, Garba Shehu, on Wednesday, December 27, 2017, he revealed that Yusuf had already undergone surgery and was in a stable condition.

Despite media reports that he had been flown to Germany for better medical care early on Thursday, December 28, 2017, Shehu denied the reports, saying that Yusuf was being treated in the country.

According to his sister, Zahra Buhari-Indimi, on her Instagram account later on Thursday, Yusuf was in a better condition.