Wowplus
Home World News In Benue Anti-grazing law must be modified for killings to stop –... 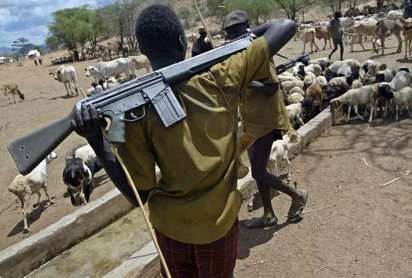 The association said the Benue government must find a balance between the farmers and the herdsmen – a situation where everyone gets what is fair.

The Miyetti Allah Cattle Breeders Association, the umbrella body of cattle breeders in the country, has blamed the herdsmen crisis in Benue on the state’s anti-open grazing law.

The state government had banned cow graving in the state.

play The Fulani herdsmen arraigned in court on Friday, January 5, 2018

The Secretary-General of the association, Usman Ngelzerma said the law must be modified for the sake of peace in the state.

Fulani herdsmen have launched multiple attacks on Benue farmlands in the wake of a new year, leaving over 70 persons dead.

Speaking in an interview with Punch on Monday, January 8, 2018, Ngelzerma said the Benue government must find a balance between the farmers and the herdsmen – a situation where everyone gets what is fair.

He said, “I like the Benue State governor. He is a peace-loving person but is working on wrong advice. The approach he took is wrong. You cannot change the way of life of a people like the way you turn off a light switch.

“We don’t wish for the crisis to continue but let us give it (the law) another look. We don’t like the killings; we will never condone the killing of people. Give the farmers their rights but consider the pastoralists too.”

Ngelzerma also condemned the Miyetti Allah Kautal Hore, a faction of the association for issuing threats before the latest attacks in Benue.

The faction was said to have endorsed former president Goodluck Jonathan in the build-up to the 2015 election.

Ngelzerma said the faction has a running battle with the Benue State Government.

He alleged that the livestock guards employed by the state government to enforce the anti-open grazing law were extorting money from the herdsmen.

According to him, the fighting between the herdsmen and the livestock guards led to the January 1 killings in five communities in the Guma and Logo Local Government Areas of the state in which over 20 persons were murdered.

The secretary-general said, “The livestock guards have constituted themselves to the police and the court at the same time. They impose penalties on herdsmen, fine them huge sums of money before releasing them. That was the situation before this crisis erupted.

“I was told that shortly before this crisis, the guards went to make some arrests in a particular community and they met stiff resistance from the Fulani because they were already tired of the persistent harassment from the guards, not the police or the DSS, army or constituted authority.

“This was what led to the violence and unnecessary deaths that followed which we do not condone.”

He appealed to the National Assembly not to delay in passing the Grazing Reserve Bill into law, which will lead to the creation of grazing reserves and ultimately stop herdsmen from encroaching on farmlands.

NUPENG to FG: Tell Nigerians why fuel is scarce