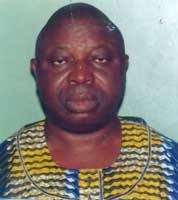 A former chairman of Orolu Local Government Area of Osun state, Chief Rufus Woleola Ojo was today convicted and sentenced d to 6 years imprisonment for corruption. The convict who was prosecuted at the Osun State High Court, Ede by the Ibadan Zonal office of the Economic and Financial Crimes Commission, EFCC, was pronounced guilty by Justice David Oladimeji on two of the three count amended charge filed against him.

The court accordingly, sentenced him to three-year jail term on each of the two counts. The sentences are however to run concurrently.

The journey to prison began for Ojo following his arraignment before Justice F.E. Owolabi of the Osun State High Court on Tuesday, 28 May, 2013 on a three count charge bordering on stealing, using position for personal gratification and money laundering.

One of the charge that earned him a jail term reads,”that you Chief Rufus Woleola Ojo (Carrying on Business under the name and style of Rulekal Ventures) and others at large sometimes in December 2006 at Orolu Local Government Area within the jurisdiction of this Honourable Court, with intent to defraud fraudulently converted to your own use the sum of N22,058,021.30k Twenty Two Million, Fifty Eight Thousand and Twenty One Naira, Thirty Kobo) property of Orolu Local Government Area of Osun State entrusted to you whilst you were its Executive Chairman”.

However, the court however discharged him on a third count of money laundering.

Tension brews between Binis and Ijaws