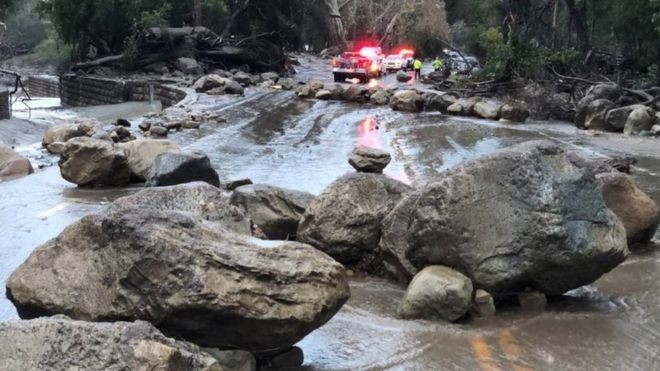 Some 163 people have been taken to hospital. Twenty had “storm-related injuries” and four were critically hurt.

A group of up to 300 people are reportedly trapped in Romero Canyon, east of Santa Barbara.

Police said the scene “looked like a World War One battlefield”.

The flooding and mudslides, affecting areas scorched by wildfires last month, have shut down more than 30 miles (48km) of the main coastal highway.

Emergency services said a number of people are unaccounted for and they expect the death toll to rise.

Thousands fled the deluge and more than 50 rescues have been performed.

The hardest hit homes were those that were not in the evacuation zone, officials say.

Among those taken to safety was a 14-year-old girl who had been trapped for hours in the ruins of her home.

The fire department published a picture of the girl encased in mud as she was led to safety.

County Fire Captain Dave Zaniboni said that five people were found dead on Tuesday in Montecito and may have been killed as result of the storm.

Oprah Winfrey also has a property in Montecito that is reportedly worth nearly $90m (£66m).

The US Coast Guard has sent “multiple airships to support rescue operations” and warn the public not to fly drones, otherwise the flights will force to be grounded.

Wildfires in December, including the Thomas Fire, swept through the area burning vegetation that helps prevent flooding and landslides.

Thousands of California residents were asked to evacuate on Monday for the second time in two months.

In Burbank, where waves of mud swept away vehicles, officials issued a mandatory evacuation order.

Homeowners in the area shared photos of mud in their homes.

Several roads are closed due to mudslides and debris, including the major thoroughfare Highway 101.

After a wildfire, burned vegetation and charred soil create a water repellent layer which blocks water absorption and leads to an increased risk of mudslides and floods.

“Recent burn areas will be especially vulnerable where dangerous mud and debris flows are possible,” said the National Weather Service in a statement.

The Federal Emergency Management Agency shared a warning for California homeowners explaining that homes that had never flooded before were now at risk.

About 30,000 residents were under evacuation orders on Monday.

This comes after a record-setting year of $306bn (£226bn) of weather and climate-related disaster costs in the United States, the third warmest year on record, according to the US National Oceanic and Atmospheric Administration.

The storm over California is expected to produce 4 inches to 7 inches (10 to 18 cm) in the foothills and 9in (23cm) in select areas.

Snow is falling at higher elevations, according to the National Weather Service.

In Syria Regime bombing kills 19 civilians near Damascus: monitor
2019: ‘Buhari is either a bloody liar or a forgetful old man’ – Rotimi Akinola writes
Fire engineer dies as California’s Thomas Fire keeps burning
Photo: House fire claims lives of father, mother and their three children in Jos, Plateau State
After IS, Libya yearns for normality
This Is How You Can Differentiate Between Swedish & British Nightclubs
2017 ‘very likely’ in top three warmest years on record
Fire and Fury: Trump says book is ‘fiction’ and author a ‘fraud’
Bronx fire: Twelve dead in New York apartment block blaze
Photos: The Kano-based priest who quit Catholic Church recently got married? See his supposed wedding photos!
Zimbabwean family stranded in Bangkok airport for months
I made a film from my bed to show my illness is real
US to stop arming anti-IS Syrian Kurdish YPG militia – Turkey
Buhari 7 things we learnt from president’s New Year address
Getting Nigeria’s railways back on track with China’s help
Pidgin English The language that unites 75m Nigerians
Zimbabwe: Emmerson Mnangagwa to succeed Mugabe as president
16yr old girl remanded in prison for stabbing 20yr old lover to death
Nigeria’s love affair with a Norwegian fish